Google beats Microsoft in terms of revenue for the third consecutive quarter.

Google’s parent company, Alphabet, and Microsoft have released their financial results. Microsoft has always been the market leader in terms of revenue generation but Google has been closing in with an upward growth. This is the third time that Google has beaten Microsoft.

Both of them accumulate revenues on different basis but some parameters intersect like web search, document creation, desktop and mobile operating system and so forth. 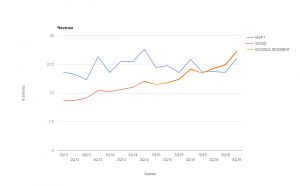 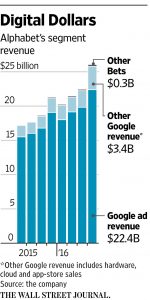 “Our growth in the fourth quarter was exceptional. We’re seeing great momentum in Google’s newer investment areas and ongoing strong progress in Other Bets.”

“Our customers are seeing greater value and opportunity as we partner with them through their digital transformation. Accelerating advancements in AI across our platforms and services will provide further opportunity to drive growth in the Microsoft Cloud.”

Also, LinkedIn, which was recently acquired by Microsoft, accounted for $228 million in revenue and a net loss of $100 million for the quarter.

Both of them plan to focus on Artificial Intelligence (AI) in future. Apple is far ahead of both, Google and Microsoft, in the revenue race. 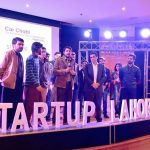