If you are an avid Google Map user, you are in for a treat! Google’s live traffic feed is now available for users in Pakistan, thereby making the experience of using Google Maps even better.

This feature, which is currently functional in several countries worldwide, was introduced in 2012. This added feature enhances Google Maps capabilities and, essentially, tells the user the time it will take them to reach their destination based on real-time traffic data.

How Google collects the traffic data in real-time

Data for this live traffic feed is gathered through third-party services and via information from Android users who have checked the ‘My Location’ feature on Google Maps. This way if several android users were moving slowly on the motorway Google Maps would be able to determine that there was traffic slowing them down. The more people opting ‘My Location’ in an area, the better the traffic information will be. 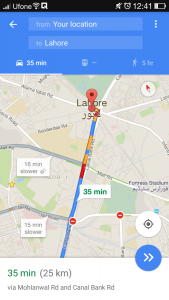 How this feature works

Whenever you will setup a destination location, you will not only be able to decide which route you want to take but Google will show different colors on your path. These colors represent the traffic conditions on that specific location. On highways and roads, green represents normal speed of traffic. Orange represents a bit slow traffic and Red represents slowest speed of traffic. So, next time you hit the road, you know that you’d be avoiding the Red area.

This traffic information will not be available on all roads and highways. Only places with traffic data available will show these colors. Live traffic is an incredible feature of Google Maps, it saves you from the hassle of choosing paths with congestion and hence you reach the destination on time.

How to turn on this feature for your device

If you are unable to check out this feature, it might be turned off for your device. Here is how you can turn it on: