In recent news, the federal government has decided to establish the country’s first e-commerce university which was announced by Senator Aon Abbas Buppi who acts as a Special Assistant to the Prime Minister.

The senator first highlighted the building of this university after chairing the National E-Commerce Symposium held by the Ministry of Commerce last Thursday. The main aim of this institution is to polish the skills of the e-commerce traders to further go beyond the national market and place their mark in the international market as well.

Aside from the institution, the Senator mentioned that the government is also working to launch Pakistan’s first e-commerce web portal in order to root out and eliminate illegal e-commerce trades that are hampering the country’s economic growth.

As of now, the country’s overall e-commerce trade volume is at $4.5 billion. However, with the new steps taken the government aims to reach up to $9 billion by June 2023. 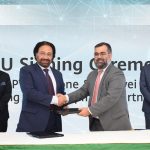