HomeShopping.pk, one of the leading ecommerce retailers in Pakistan, has unofficially unveiled their new logo and we are speculating a possible rebranding of their portal as well.

TechJuice got their hands on this logo through an official press release sent to us by Creative Chaos about HomeShopping starting HSN Ventures. This means that HomeShopping has a new logo and they might be replacing it with the older one very soon.

The new logo is a much-needed face lift, that depicts a modern, cleaner and minimalistic image using some clever design language. Also noticeable is the use of both languages, English as well as Urdu, in a single logo, a first for major ecommerce players in Pakistan, showing their intentions for targeting the Urdu-speaking and English-speaking community, equally.

Earlier today, they also announced the formation of “HSN Ventures” making HomeShopping.pk a 100% owned entity of the newly formed company. They also announced their plans to partner with Creative Chaos, a technology, digital and outsourcing services company that has worked with a number of leading global ecommerce players around the globe, including GroupOn, Ebay, Staples and Sears. Through this new partnership, HSN Ventures will be leveraging Creative Chaos’ expertise and technical skills in improving their own portal and introducing new scalable technologies and product catalogs.

To the customers, this means that the company will be working to improve their website and introduce new, much more responsive features in the web portal, leading to an improved shopping experience. 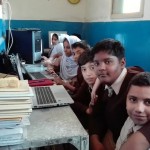 Hour of Code: More than 2400 students from Pakistan take part