Minefield marking provides immediate warning signs for people moving in or nearby hazardous areas. Marking is done with the help of pickets and ropes on the pickets and provides a physical barrier to distinguish between known danger areas and the ones deemed safe.

“The equipment is capable of marking/fencing at a minimum rate of 1.2 km/hr with an inter-picket spacing of 15m. The system has the capability to place the pickets at 10-35 meters, spacing in the step of 5m. The picket can be driven to a maximum depth of 450mm by this system,” BEML said in a statement.

The tensions between the two neighbours keep flaring up occasionally, and both countries spend billions of dollars each year to upgrade their defence capabilities against each other. 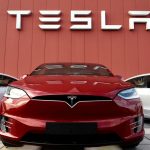 Tesla’s ‘Full Self-Driving’ under investigation by authorities in California