This past weekend saw an excellent use of live streaming on Facebook as a woman from Lahore used the social media platform to get the local police into action and bring a couple of criminals to justice.

As per the reports, two burglars broke into Lahori resident Saba Bano’s house in Model Town and took her father, sister, and her children as hostages. As it happened, Saba was still safe; she was quarantined upstairs in her room as a result of contracting COVID-19. She didn’t realize what was going on right away as she was watching a movie with headphones on, but the moment she heard her sister’s screams, she sprang into action and noticed her a couple of men dragging her father while he begged them to take whatever they wanted and just leave.

Naturally, Saba reports feeling blank and not sure of what to do in the moment, but she eventually decided to post a status on Facebook to let the world know that there was a robbery at her home so that she could get help.

It worked, because soon after she did that, people started calling the police helpline and advised her to do the same. The police responded, but they were unable to determine the location of her residence. This is when Saba ingeniously decided to start a Facebook Live stream that would help get the word out and also help the police determine the exact location of her house.

Upon reaching the house, the police set up a perimeter and caught the robbers by surprise. They were unable to escape and were eventually caught and transferred to the Faisal Town police station. Criminal proceedings have now been initiated against them. Later, Saba took to Facebook again to inform everyone that her family was safe and to thank everyone for their support. 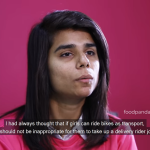