Latest Nokia 9 leak shows 5-lens camera at the back

Latest high-quality renders for the upcoming flagship smartphone from Nokia, Nokia 9, show a 5.9-inches 18:9 display and five lenses for the rear camera.

OnLeaks, considered one of the famous leakser, now brings us a very vivid set of leaks about the upcoming flagship smartphone from Nokia. The new smartphone, to be called Nokia 9, is reportedly being said to come with a five-lens setup at the back. The latest leaks consist of CAD-based 5K images and 360-degree video that shows the design of the smartphone.

So… Here comes your first full look at the upcoming penta-lens camera phone by #NOKIA which I guess will be marketed as the #NOKIA9… As usual, 360° video + gorgeous official looking 5K renders + dimensions, on behalf of @91mobiles -> https://t.co/KFov7h2E9Z pic.twitter.com/0v0NuDRNZB

As far as the design department on the new smartphone is concerned, Nokia 9 is expected to come with an 18:9 full-screen display spanning over 5.9-inches and has no notch at the top. On the rear of the smartphone, we get a 5-lens camera setup, each presumably for different focal lengths. The camera setup is Carl Zeiss branded and the phone is likely to take the brand name as Nokia 9 PureView.

The concept of putting more than one lenses in the smartphones isn’t new. The dual-lens setup consisting of a wide-angle lens and a portrait lens has now even made it to the middle-tier smartphones. The OEMs have now started testing new horizons to improve the camera. Huawei very recently introduced a three-lens matrix setup on its and Huawei Mate 20 and now Nokia is rumored to take up the game to 5 lenses.

It must be noted that these design reported are based on leaks from third parties and nothing could be said with conformity until Nokia itself makes the smartphone public. Nokia 9 flagship smartphone is expected to be released into the markets early next year. As far as the other specifications of the smartphone is concerned, Nokia 9 is expected to come with Snapdragon 845 processor, 4,150 mAh of battery and would run Android Pie.

Images and News Via OnLeaks and 91mobiles 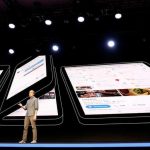