One of the most post popular Bitcoin wallet app, Electrum.org, working since 2011, has exposed a copycat product named Electrum Pro as a malicious app that steals users’ seed keys. The site reports that this copycat wallet, once loaded with Bitcoins, can steal them overnight as it’s loaded with malware to do so.

The announcement came as a Tweet from the official Twitter handle of Electrum. The company said that its official website is Electrum.org and they don’t own the “dot com” version of the domain, which is very likely being used to distribute Bitcoin-stealing malware.

Electrum’s website is https://t.co/aHiZIZH54e. We do not own electrum dot com, and “Electrum Pro” is very likely bitcoin stealing malware. Please use https://t.co/Rne1yx5acw for a list of Bitcoin wallet websites.

The team behind Electrum now claims Electrum Pro is a malware meant to steal bitcoins. To make things worse, Electrum Pro comes above the legitimate Electrum on Google search because of Google Ads, a fact that will clearly trip up many users. 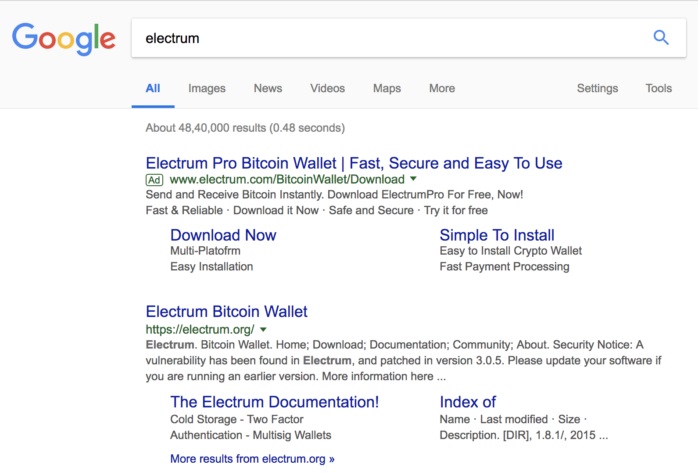 The website looks reasonably professional, and it is hard to identify it as a fraud unless you have been to the original site before. They have a slightly different logo and claim to be a fork of the legitimate Electrum wallet.

Electrum claims the malware is only available in the Windows and OS X versions of ElectrumPro. The Linux version remains unaffected, probably because the scammers did not want to have it in plain sight.

If you have recently installed Electrum, make sure you installed the official version from electrum.org and not from any other source. If you mistakenly used the malicious wallet, move your Bitcoins immediately and remove the application from your computer.