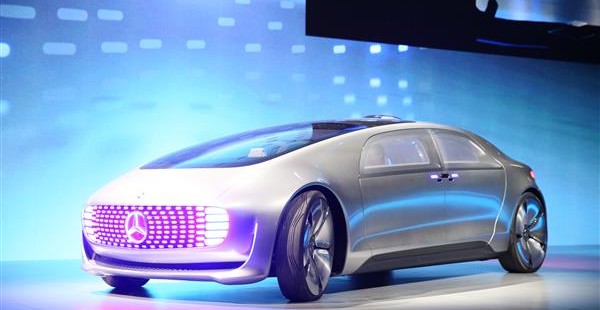 Head of Mercedes Benz, Dr. Dieter Zetsche, unveiled the company’s concept car of the future at CES keynote 2015. The F 015 ‘Luxury in Motion’ is the upcoming ‘connected car’ which even dims Google’s self-driving car in comparison. The company has designed the car with surplus futuristic concepts.

The magnificent body of the car gives an out of the world feeling with its sleek, fluid and silver carbon fiber build. The changing LED light colors project a light path for pedestrians to cross the path safely in addition to indicating self-driving versus manual modes. Moreover, the car is equipped with sensors and radars to detect nearby motion for safety of passengers since it is an important factor in an autonomous car.

The new car has the capability to blow anyone’s mind with seats that can rotate for passengers to face each other and rider controls to manage destination. The car is intelligent enough to know its path and make turns when necessary.

The interiors of the car can raise excitement levels of any tech-savvy with the touch screen dash boards and door panels. Passengers can adjust window privacy, music and temperature of the car from the in-built controls or preset it from their smartphones. The car self-parking mode will let the driver to go to his work without worrying about finding a car-parking area. Furthermore, the ‘Extended Sense’ mode can locate the car owner through his smartphone.

However, this is purely a concept even though Mercedes Benz did display a prototype on CES 2015 stage. We hope this futuristic innovation can make to the market very soon.

Via The Next Web