Microsoft strikes back with Surface Duo 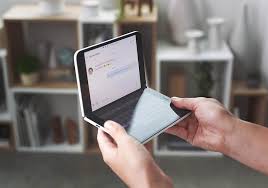 Microsoft has surprised the world with the Surface Duo launched recently. It is running on Google Android operating system, whereas its little sister, Surface Neo, is a dual-screen device made public only yesterday runs on Windows 10X. The Surface Duo has two 5.6-inch screen displays, which when unfolded turns out to be an 8.3-inch screen display. Here is my favorite part, it is only 4.8mm thin.

It can be rotated to 360 degrees. Microsoft says it has committed itself to dual-screen devices to increase users’ productivity on the go. It is also said to be much smaller than it is in person. You can fit it in your jeans pocket, making it the smallest pocketable Surface device. It is a miniature tablet that is also a phone.

However, Microsoft does not consider this product a phone. Microsoft’s Chief Product Officer, Panos Panay says, “I feel like ‘phone’ is such a limiting word. And then you say, ‘well, smartphone.’ I don’t even know what that means. And then ‘phablet.’ I’m not sure what that is. I think if you’re going to create a new category, you’re going to try to change things, push things forward. The minute you put it in a box, I think you’re lost. So I’ve been pretty resistant to that. Not because it doesn’t act like a great phone.”

One drawback has certainly been the hardware itself. Microsoft has use both; Android Operating System and Windows. The reason for using Microsoft on the Surface Duo was that it was the only choice if the company wanted to make a portable product that can fit into peoples’ pockets.

Microsoft tried to capture developer and consumer attention, but it could not acquire the needed market share. So it had to go along with Android, and ensure customers could access all the apps they needed.

This is surely a revolutionary device that can make or break the market. We do believe that it should be tested first. With glass as the main component of the product, and 4.8mm hardware, Microsoft has one of the most delicate products in the market. Also, no one wants the right OS on the wrong hardware, making it unmanageable and difficult to use.

For now it seems that Microsoft knows what it is doing.

previous
Realme 5, Realme 5 Pro launched in Pakistan - All the specs you need to know
random
next
3 reasons why Mobile In-App Advertising is better than other digital channels
Trending Posts