Muniba Mazari walks again with robotic support after a decade 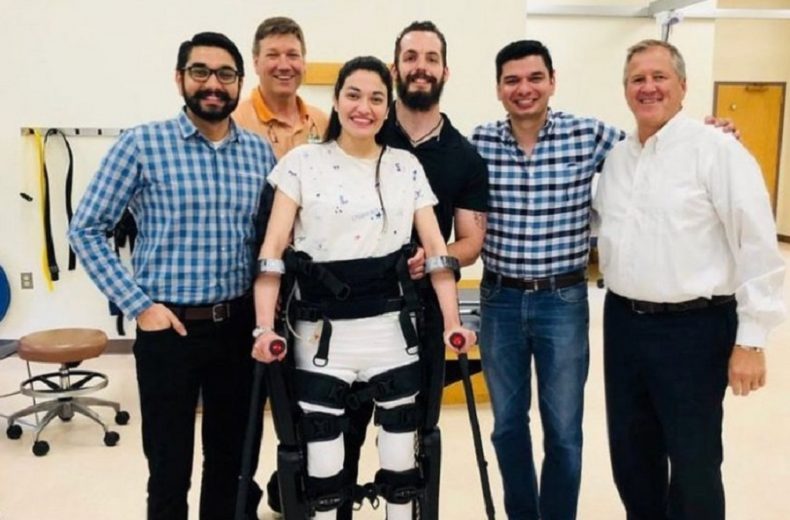 The famous motivational speaker and philanthropist, Muniba Mazari has walked for the first time in ten years, with robotic support.

In 2007, 21-year-old Mazari met a horrific car accident that gave her a major spinal cord injury along with multiple other injuries. This resulted in her lower body being paralyzed. After a span of ten years, she can now walk with ReWalk robotics manufactured by a US-based company. ReWalk is a wearable robotic exoskeleton that offers powered hip and knee motion with the use of computer-based control system and motion sensors. This enables the individuals that had spinal cord injury (SCI) to stand upright, walk, turn and also climb and may also use stairs.

Ms. Mazari tweeted heartwarming pictures and videos of her trying to move around with the robotic exoskeleton.

Dear all,
Thank you so much for your prayers and well wishes. Here’s a small video of how Rewalk works! ? It was truly a wonderful experience. Thank you @ReWalk_Robotics and my amazing medical team for this! #gratitude ?? pic.twitter.com/xAgQsxbAGi

Mazari has been featured in Forbes 30 under 30. She was also among BBC’s 100 most inspirational women in 2015. She is also a singer and a TV anchor. The remarkably talented, Mazari is also an artist and has her own brand, Muniba’s Canvas.

Many others lose their motivation to live after such terrible incidents but she started telling the story of her courage and resilience to motivate others. Being able to walk again is surely a miracle in the life of Mazari, and a hope for many others.

previous
Is Facebook developing a search engine for influencer marketing?
random
next
This app is a solution to your smartphone addiction
Trending Posts