Now that the trump cards from all major Android smartphone manufacturers are out in the open, it is time for a head-to-head comparison of them all and see for ourselves if any of them are worthy for a potential purchase. So without further ado, here goes the face-off for the first quarter of 2014. 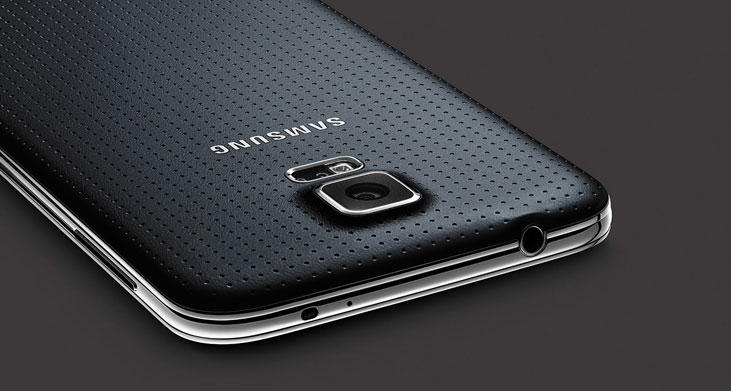 The Next Big Thing from Samsung went official on February 24th this year at Samsung’s Mobile World Congress (MWC) event, Unpacked-5. Samsung decided to stick with poly carbonate for a fifth consecutive time but had plenty of other features to show-off during the unveiling with a better, feature-rich camera, integrated heart-rate monitor, and fingerprint sensor being the primary ones of them. 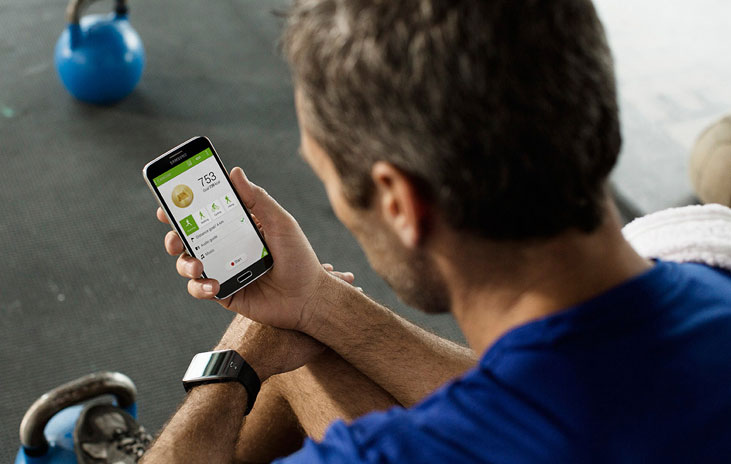 GALAXY S5 will be available from April 11th onward worldwide for a price range of around $600-$700 for an unlocked piece. 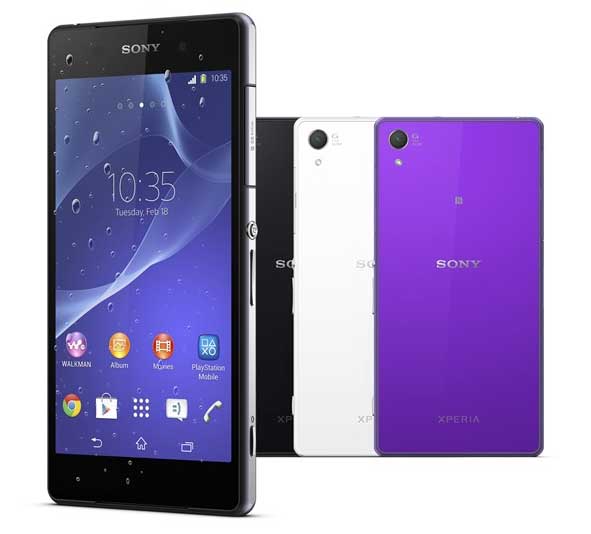 Sony’s flagship device was announced at MWC in Barcelona as well, alongside Xperia Z2 Tablet and mid-range Xperia M2, as a successor to Xperia Z1. Sony packed the beautiful glass-clad flagship with latest quad-core Snapdragon 801, a whopping 3GB RAM and 3,200 mAh battery pack, making it the only flagship in this comparison to hold that much raw power. A 1080p, 5.2-inch display, 16GB internal storage and microSD card slot complete the basic specs set.

Camera is one of the highlight features of Xperia Z2 as well. Sony takes the lead here as well with 20.7 MP primary camera with a 1/2.3” Exmor RS sensor that is capable of 4K video recording. Front-facing stereo speakers, water and dust-resistant, 8.2mm slim, glass housing conclude the package. 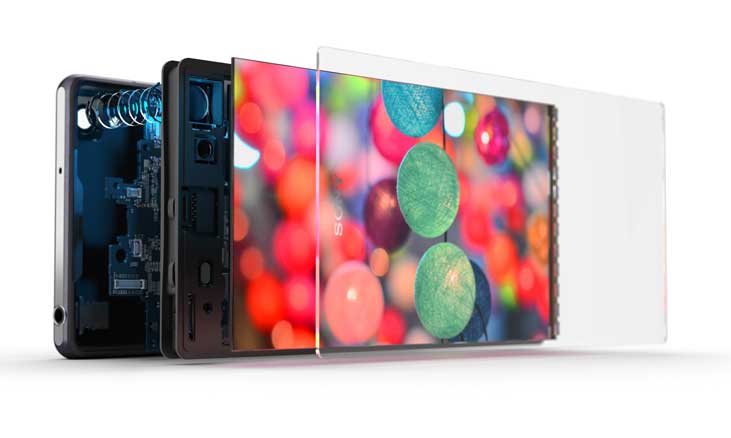 Xperia Z2 will be made available by April this year for around $750-$800 unlocked. 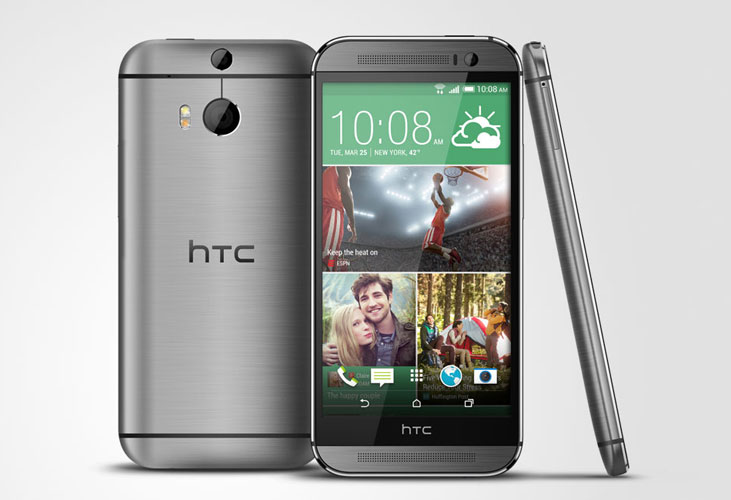 HTC unveiled its follow-up to last year’s HTC One on March 25th. While there were hardly any surprises after a non-stop series of leaks had revealed each and every single detail of the handset, HTC focused on three major parts of the phone namely the camera, build quality and Sense UI, during the event. Standard set of HTC M8 specs include Snapdragon 801 chipset with 2.5GHz quad-core Krait 400 CPUs, 2 GB of RAM, 16/32 GB internal storage options, microSD card support, HTC’s signature front-facing stereo speakers, premium aluminum unibody design and 2,600 mAh battery.

HTC’s camera had been a center of attention ever since the first batch of leaks pointed at a dual-lens system. The press event explained the purpose of the system as a depth-sensor which can focus the desired parts/objects of a photo after it has been taken. HTC’s decision to stick with the 4MP camera may have disappointed some but a 1/3” sensor with pixels size of 2µm promises high-quality low-light images. Unfortunately, there’s no 4K video recording support for the camera. A refreshed and simplified Sense UI (dubbed Sixth Sense for it is the 6th iteration of the software) was also detailed at the event. 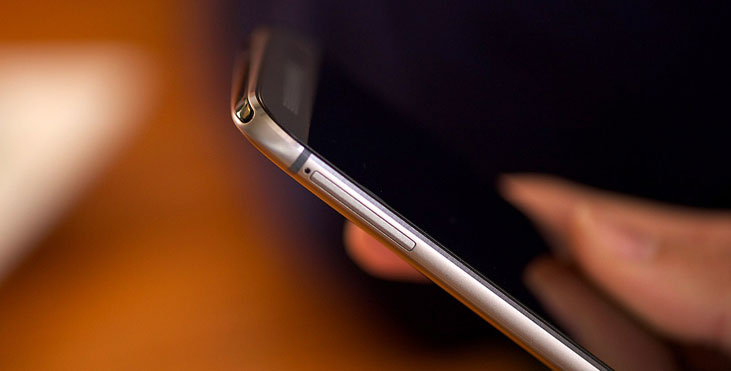 HTC One M8 was made available immediately in North America for a price around $199 with 2-year contract and the global release will begin by May this year for $600-$650 without contract (unlocked). 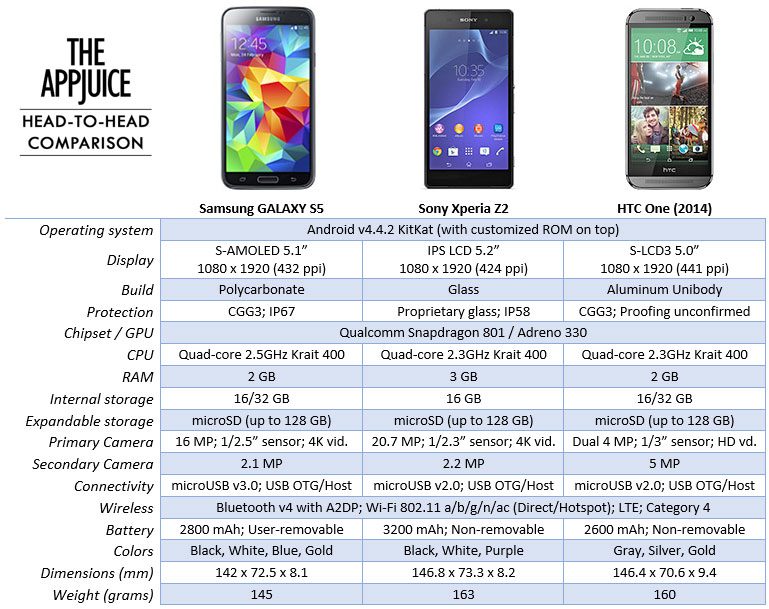 Here’s a head-to-head comparison chart of all three devices.

This concludes our comparison of the three flagships; do stick around for detailed reviews of these products once we lay our hands on them. What were your expectations from these smartphones, and what device of these three would you like to own when they are available? Do tell us in the comments below! 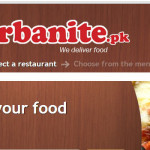