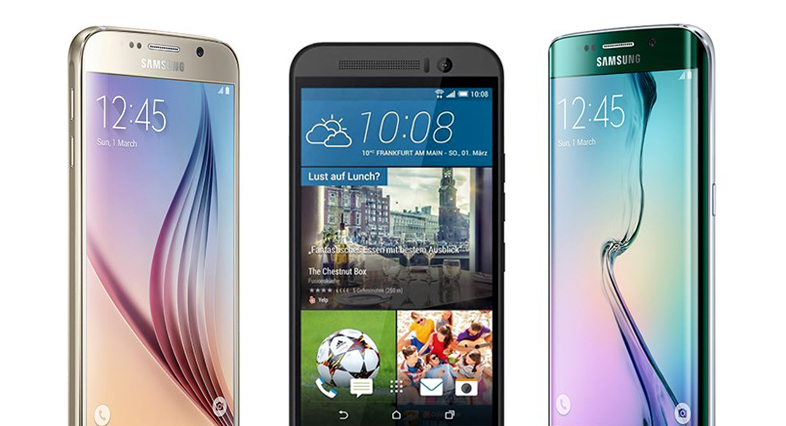 Today is a good day to be a technophile.

Mobile World Congress 2015 has officially kicked off and almost all of the industry giants from the mobile technology space are eager to win their customers’ hearts one more time. Samsung and HTC, two of the Asian competitors in consumer electronics domain, announced their latest flagship devices today and will hope these can sustain the business for the year to come.

So let’s take a look at these three flagships, namely Samsung GALAXY S6, Samsung GALAXY S6 Edge, and HTC One 2015 M9, to see how they hold up to today’s standards and consumer expectations.

Those are the two words that, according to Samsung’s CEO and president J.K. Shin, encompass the company’s approach that culminated into the latest GALAXY devices. While we might want to hold our judgment until we actually get to use the devices, one thing that is certain from the very first glance at these smartphones is that they are not your GALAXY’s of the old. Significant design choices are what distinguish the Samsung GALAXY S6 and GALAXY S6 Edge from their predecessors. 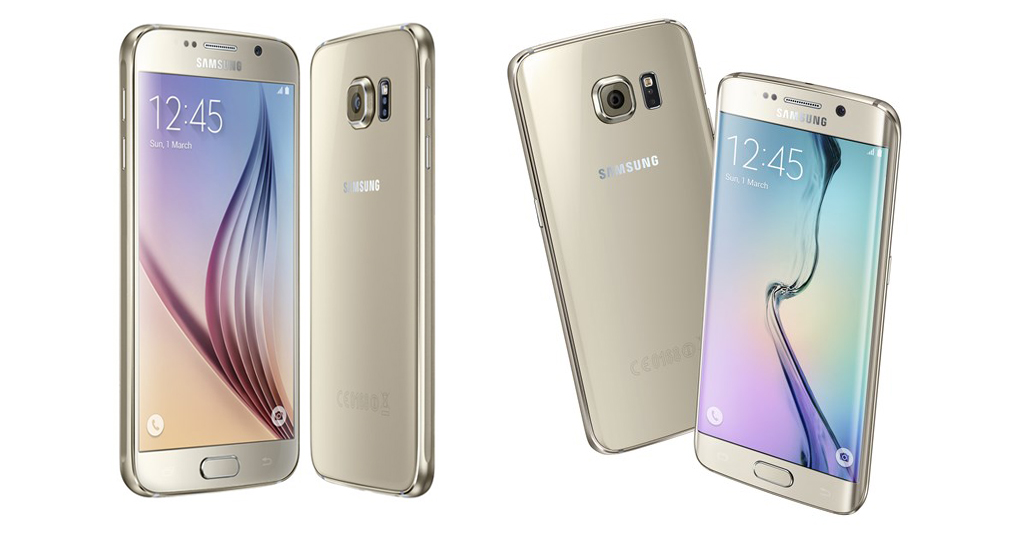 GALAXY S6 and GALAXY S6 Edge sport a 6.8mm and 7mm thin housings which are covered by glass on both sides, reminiscent of iPhone 4 and Nexus 4: the plastic is, finally, gone. The fronts are adorned by 5.1-inch Quad HD displays, and 5 MP secondary cameras. GALAXY S6 Edge’s defining feature is a subtle display curve that goes on both sides of the screen, unlike last year’s Note Edge; it is, thankfully, not an in-your-face approach that overly exploits the software features.

HTC, on the other hand, didn’t care much to improve on what it apparently considers the best in the industry. There is hardly any major facelift that M9 got, save for the dual-tone body color and rearranged button positions. The 9.6mm-thick body is still brushed aluminum, the display is still 5-inch 1080p Super LCD, and the front-facing BoomSound speakers are still there. What’s gone, however, is the dual camera setup from the back, and a 20.7 MP, f/2.2 camera has taken its place. The much-hated UltraPixel camera has found a new home at the front of the device. 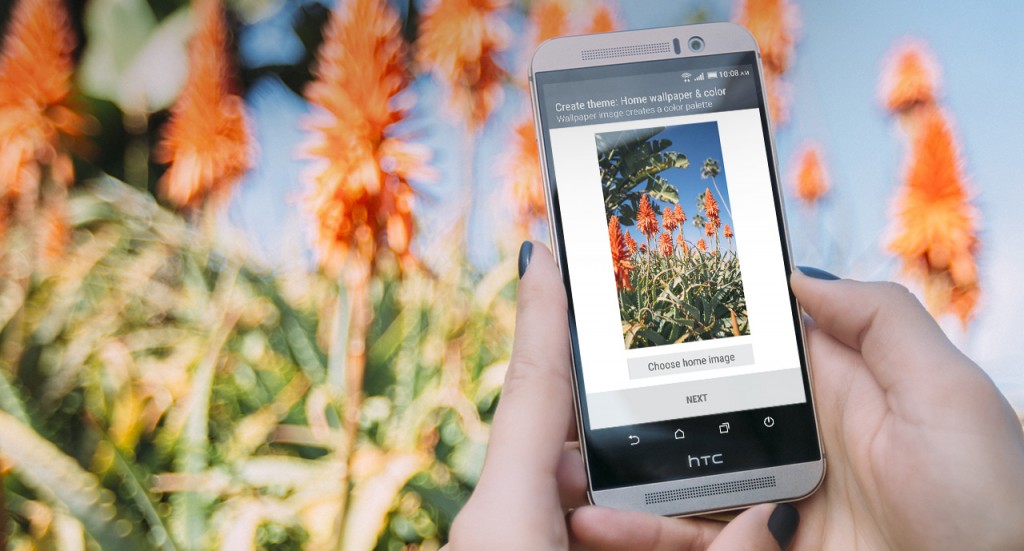 Coming back to the GALAXY’s: Home-made Exynos 7420 chipsets can be found under the hood with the octa-core processor and Mali-T760 GPU. The RAM is an adequate 3 GB. The 16 MP primary cameras on both flagships feature optical image stabilization, 4K, and slow-motion 720p@120fps video recording.

Samsung has evidently sacrificed a few well-loved features of GALAXY S5 this time around. Lack of the removable battery, expandable storage, and water-resistant are the most important of these. 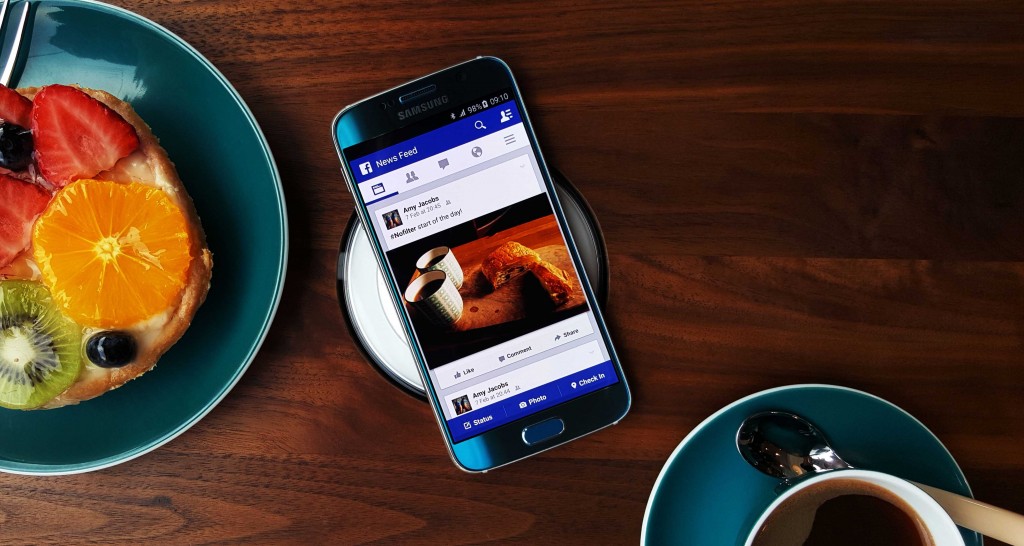 HTC, on the other hand, also sports 3 GB RAM alongside the latest 64-bit Qualcomm Snapdragon 810 chipset coupled with octa-core processor (the same as found in Samsung’s offerings) and Adreno 430 GPU. 32 GB is the only memory option though it can be expanded using a microSD card of up to 128 GB capacity. It also features a 2,840 non-removable Li-Po battery, which is bigger in capacity among all the three devices

On the software front, all three devices feature Android v5 Lollipop operating system. HTC One comes with the new HTC Sense UI 7.0 while Samsung GALAXY devices have a toned-down version of their own custom ROM, TouchWiz.

Both Samsung smartphones will be available in 32, 64, and 128 GB variants, and the color choices include White Pearl, Black Sapphire, and Gold Platinum, with Galaxy S6 Edge boasting an exclusive Green Emerald option as well. The smartphones will be made available at the same time in some 20 countries around the world, April 10th and onwards.

Price of either of the smartphones hasn’t been shared by the company, but it will most likely be something around or higher than $649 for an unlocked base unit.

HTC One M9 will be available in Gunmetal Gray, Amber Gold, Silver/Rose Gold, and Gold/Pink color options. The device is expected to be released in the upcoming weeks with a price tag around $650. 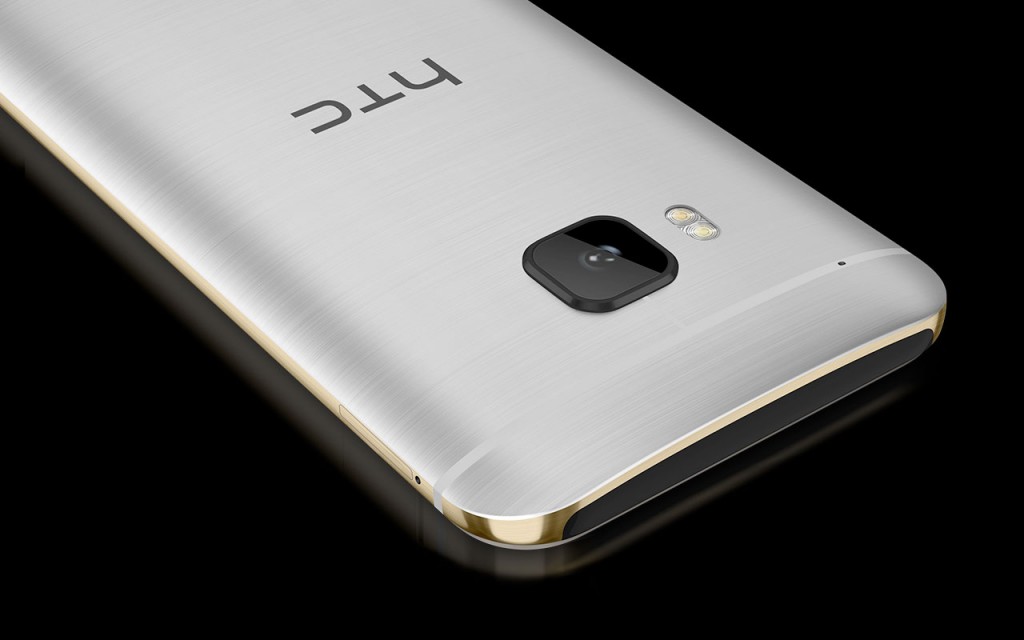 Here’s a side-by-side comparison chart of major specifications of the three devices: 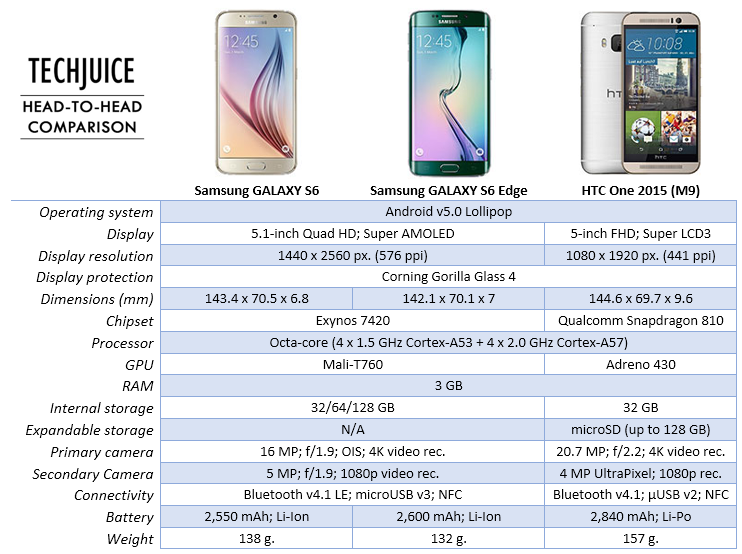 This about sums up the major differences between, and the changes to the Samsung and HTC flagships. Do you think it will be compelling enough for customers to buy these devices? Are you yourself planning on buying any of these smartphones? Do let us know your opinion in the comments below! 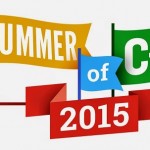 We Need Pakistani Coders To Join Google Summer Of Code This Year!