Samsung Pakistan has announced that Samsung Galaxy S8 and S8+ are now available for preorder at the retailers across the country. According to the sources, Samsung Pakistan is also offering a surprise cash voucher with every pre-order of Galaxy S8 or S8+.

Followed by a flood of rumors, Samsung unveiled its flagship device, Samsung Galaxy S8, and upsized S8+ on March 29th. Both the models of the newly launched Samsung Galaxy S8, the standard S8 and S8 Plus, have already been pre-ordered so much that it has broken all the company’s presale records in Korea. The local news outlets from Korea have reported that Samsung received as much as 550,000 orders for the S8 within two days.

Be the first to get your hands on this dynamic smartphone. Pre Order for S8 and S8+ starts now. Visit your nearest retailer to Pre Order pic.twitter.com/TySr6N5N1K

The latest flagships are available, in a limited number, at retail outlets. The customers will have to fill out a form and provide a CNIC copy with PKR 10,000 to book their order.

Samsung Galaxy S8 has a starting price of $720 (about PKR 75,000), while S8+ will retail for about $840 (about PKR 88,000). Remember these prices are not for Pakistani market, so expect some variations when these devices are officially released in Pakistan. The expected price of Samsung Galaxy S8 is somewhere between PKR 86,000 – 90,000 and that of Galaxy S8+ might be above PKR 1 lac. 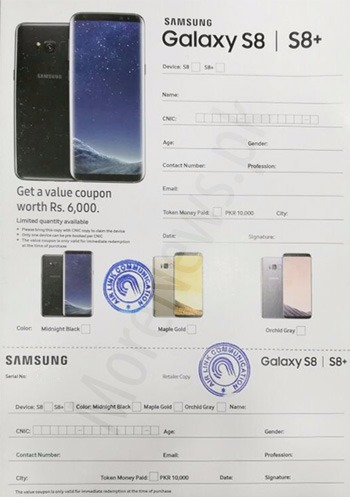 Both devices will be available for purchase starting from April 21st in America and Canada and from April 28th in Pakistan. The phones are available in three color variants: Midnight Black, Orchid Gray, and Maple Gold. 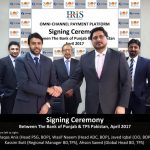