Samsung Galaxy Tab S: 8 Things You Should Know Before You Buy It 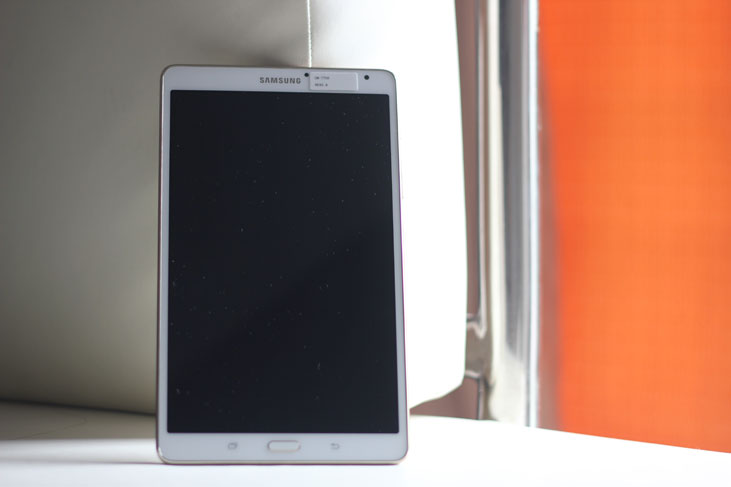 Planning to buy a new tablet, and considering Samsung Galaxy Tab S 8.4/10.5 as your next? Hold that thought! While these are among the strongest offerings from the Korean consumer electronics giant Samsung, there are a few things you should know before you go on with the purchase. We’ve tested out the Galaxy Tab S tablets, and here’s our round-up of all the most important aspects you must factor-in as you browse through your options.

Scroll away and tell us if you conclude that Samsung Galaxy Tab S is the right choice for you.

1. Is Samsung Galaxy Tab S the one for you?

The very first question you should be asking yourself if you’re planning to buy a Samsung tablet is: which exactly is the model that’s right for you. This is important because each year Samsung floods the market with a plethora of tablet models: Tab, Tab Pro, Tab Active, S, Note, and Note Pro. The differences between the features, internals and prices of all these lineups can vary, and then there are the different screen sizes for almost all of them. This translates to diversity at the expense of confusion. 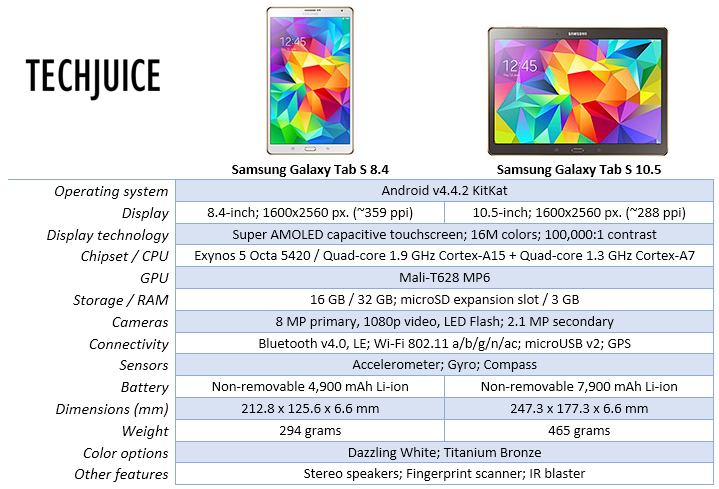 It is available in 8.4” and 10.5” display sizes with Titanium Bronze and Dazzling White color options (both Wi-Fi and LTE models exist for Tab S lineup).

Samsung invested in a 2K display for the classic Google Nexus 10 tablet which proved to be a great future-proof decision when we look at it in hindsight.

The display of Galaxy Tab S (at 1600 x 2560 px; 359ppi for 8.4-inch and 288ppi for 10.5-inch version) promises even more as it contains the Super AMOLED technology at its core which flaunts deeper blacks, great viewing angles, and uncompromising sunlight legibility. Contrast ratio for the display is a stunning 100,000:1. Summarizing our view: if you use Samsung Galaxy Tab S, it will spoil your taste for all other tablet displays, it’s that good.

3. The build quality is typical Samsung.

Apart from the stunning display, Galaxy Tab S features Samsung’s signature build with a hardware Home button on the front (which doubles as a Fingerprint Scanner) flanked by the capacitive-touch ‘Back’ and ‘Recents’ keys. The back-panel sports a dimpled faux texture like Galaxy S5; there’s a camera sensor bulge and LED Flash on top and contacts to snap the accessory cover into.

Right side of the 8.4” model features Wake/Sleep button, volume rocker, and microSD card expansion slot. On the bottom you’ll find microUSB port, a headphone jack, and speaker. Top side also features a speaker and the Left side is left totally blank. On 10.5” version, you’ll find microUSB port, speaker and microSD card slot on right, and headphone jack and another speaker on the left.

Tipping the scale at 294 and 467 grams respectively, both 8.4” and 10.5” Galaxy Tab S models have a balanced weight, and you won’t get tired of holding either one for extended periods of usage. Our only grudge about the design is the frequency of accidental button touches because of thin bezels, especially for the 8.4” model.

4. It’s got some extra bells and whistles…

In contrast to the increasing display sizes of mobile devices, one area that is particularly lacking is the accompanying software to go along with the larger displays. Samsung is one of the very few market players to actually bundle some cool features with its otherwise bloated TouchWiz interface for large displays.

Samsung Galaxy Tab S comes with Android v4.4.2 KitKat with Samsung’s heavily-customized TouchWiz and Magazine UI on top. The usual Android Homescreen, customizable App Drawer and other features are there but Samsung has added its Magazine UI to the Homescreen as well. At least one of these Magazine UI screens is mandatory, and the regular Android Homescreens are optional. 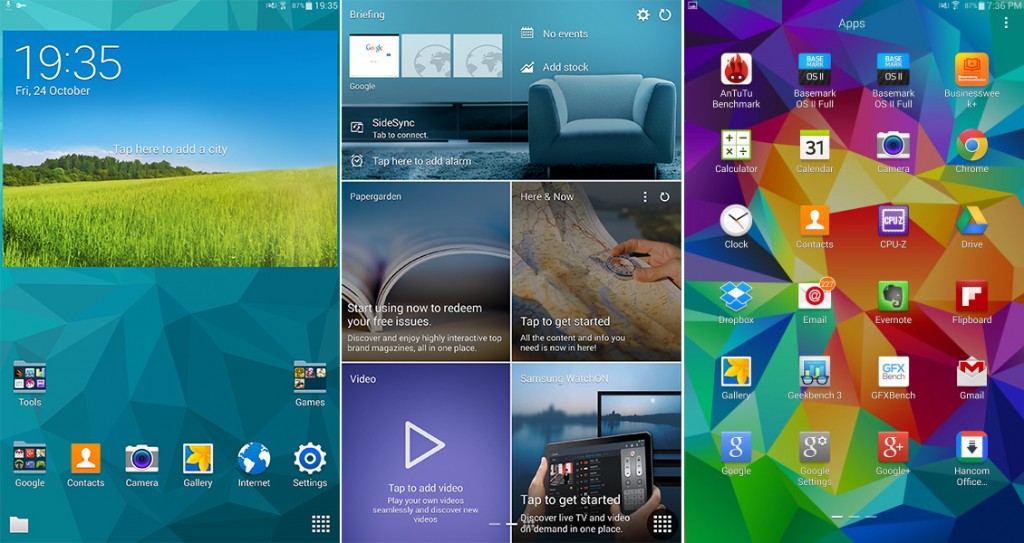 Samsung’s S features and multi-window UI is also available in the tablet, though it is limited both by the means of functionality and the number of apps that can utilize it. Using the multi-window feature, two apps can be operated on at the same time, as they open-up side-by-side. The windows can also be resized, popped-out and stacked. The tablet also bundles Samsung’s Remote PC, KNOX and SlideSync software.

No matter how powerful the underlying processing hardware is, however, it is very easy for lag to creep in, especially when using the Magazine UI. It is not on a scale to make you regret your investment but still it is a little hard to believe that UI stutter exists in 2014.

The Fingerprint scanner is also there, and it has greatly been improved since its original implementation in Samsung’s smartphones. You still have to slide your finger over the scanner instead of just touching it, but the responsiveness and accuracy of scanning is much better now. 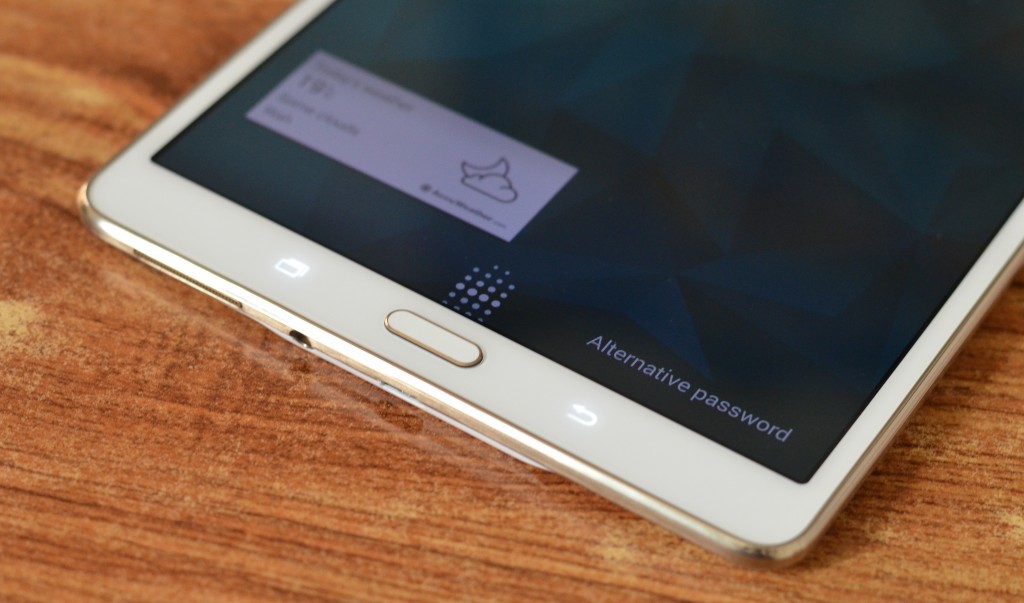 As we said before, Tab S lacks some of the more premium features when compared to Note and Note Pro series, the stylus being one of them. Samsung’s signature S Pen can found with the Note and Note Pro series. The lack of stylus for Galaxy Tab S ensures a relatively lesser price tag. Third party styluses can sure be used with the tablet but unfortunately it won’t mean you get full Note series’ S Pen capabilities.

Samsung Galaxy Tab S series has an 8MP primary camera which is a decent shooter as whole. It is capable of taking panorama and HDR shots, and some lightweight low-light photography coupled with the LED flash. But tablets are never meant to be the ideal devices for serious photography, and Galaxy Tab S proves just that. The shots rarely come out to be sharp and the pixels look fused when seen on a larger display like that of a PC.

The front camera is 2.1 MP, and isn’t that capable or feature-rich as one might find in smartphones.

7. But the battery-life is pretty decent.

Official battery-life statistics put the multimedia usage at around 11 hours and 120 hours of music playback. During our testing, we found the real-world scenario not very different from the ones claimed. Galaxy Tab S is a great companion for multimedia consumption or web browsing because of its great display and stereo speakers. It also comes out fairly decent in gaming and general tablet usage. 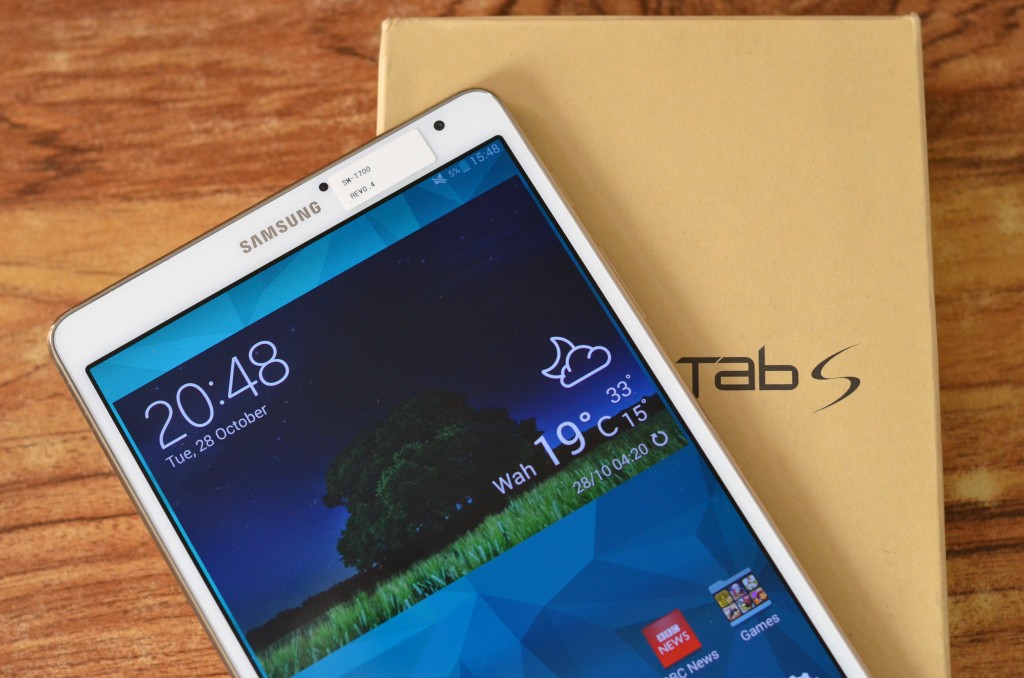 We, however, highly recommend buying an official model with Samsung warranty. It will cost a little more than what you’ll pay otherwise but the added advantage of an official products are definitely worth it:

You can locate a Samsung store near you using the Store Locator tool provided at Samsung’s official Facebook page. Online Pakistani retailer Daraz.pk also sells official Samsung products, so it is an option if you want to go shopping from your home.

The affordability comes at the expense of a stylus, so if you are more interested in arts or stylus-related capabilities of a tablet in general, Samsung Galaxy Note Pro lineup is worthy enough to be considered. 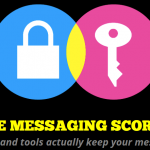