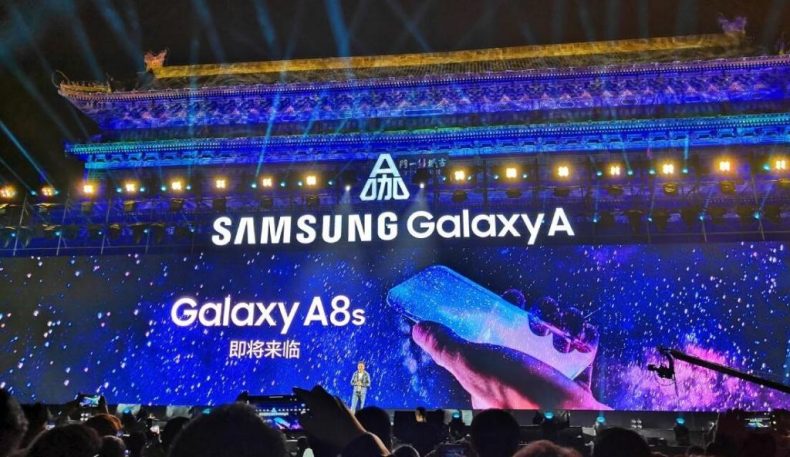 Samsung held a launch event in China which was focused on its Galaxy A9s and A6s, during which the company teased an entirely new handset model with a design that forgoes a notch and will apparently join the Galaxy S10 next year in sporting an all-screen display. That phone is the A8, part of Samsung’s mid-range A series which will reportedly be the handset maker’s first notch-free phone that sports an edge-to-edge display.

According to Samsung leak-expert Ice Universe, there will still be a hole drilled into the display to allow for a front-facing camera. Samsung is the only smartphone manufacturer to not jump on to the notch bandwagon. But this hasn’t stopped the company from ensuring that they work towards an all-screen display. Talking about the Galaxy A8s, which is the cause for all this excitement, some reports also suggest that it will for sure have a camera cut-out. The camera cut-out might even be disabled while viewing videos or playing games, ensuring that it does not obstruct the display. The placement for the cut-out is still not known. Some sources are saying that it will be on the sides and not the center to avoid direct obstruction. A recent tweet, which is no longer available, showcased the possible placement options that Samsung has for the device.

Whether the company has cracked the code to making an all-screen display or whether we’ll see a camera cut-out is not clear at this point in time. They have not revealed anything more about the device which might see its launch in the early parts of 2019. A truly bezel-less and notch-less display is also possible as Samsung has recently patented a technology to have an in-display front camera. With this, the front camera will be present within the display, eliminating the need for a notch or a cut-out to house it. This technology is probably the only way to achieve a 100% screen-to-body ratio.

It is not surprising that Samsung is stepping up its innovation game. The company can no longer hold on to new technology or save it just for its flagship smartphones. With increasing competition threatening it in almost every smartphone market, the company needs to go out with all guns blazing. Other reports about the company developing a technology which will turn the entire screen into a fingerprint sensor has also appeared, showing that there is no slowing down for Samsung as of now.