Samsung has been known to lead the smartphone industry in terms of innovation, from the introduction of ‘Phablet’ phones to the latest trend of ‘bendable displays’, Samsung has been unstoppable for the better part of the last decade. The latest innovation from Samsung comes in the form of a highly anticipated and long awaited ‘foldable smartphone’.

Samsung, last night unveiled its first foldable phone at its developer’s conference. The handset is called the ‘Infinity Flex Display’ which can be unfolded into a tablet or bent into a regular size smartphone. The company says the technology powering the new phone will serve as the “foundation of the smartphone of tomorrow”. However, the phone is not ready at the moment for public use, it will go into production within the next few months, and will be available for the public in the early part of 2019. The prototype of the mobile was shown at the event at San Francisco by the Senior Vice President of mobile product marketing, Justin Denison. For some reason, the device was not revealed properly as the lights were dimmed while the phone was placed in some sort of a case to hide its design.

Not much was revealed about the phone, however, the display specs of the device were revealed, it’s fair to say that the device packs mighty impressive display technology. 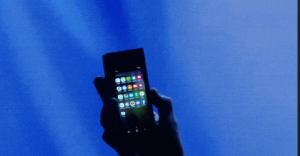 There are still a lot of things that the tech-community is unaware of about this new device from Samsung, the interesting thing, however, is that Android from now on will add native support for the foldable phones in its upcoming versions as Google’s head of Android UX, Glen Murphy was also on stage with Samsung’s executive staff and assured everyone that Google will work with the developer community to bring more features and apps to the phone.

It should be mentioned that Huawei too has announced that it will be releasing its own version of the foldable phone, sometime next year which will come with 5G technology.