Science and Technology park to be setup in Islamabad, 50M Rupees allocated

Ministry of Science and Technology has officially devised a plan to establish a science and technology park in Pakistan’s federal capital, in collaboration with COMSATS University Islamabad (CUI).

The project is aimed at providing students with tools and facilities that will enable them to conduct scientific research. It is expected to have far-reaching positive consequences for Pakistan’s science and technology landscape as well as its economy

According to an official aware of the development, the government has allocated a grand total of Rs. 50 million for the project. He went on to state that the requisite feasibility report has been drafted by a company of renown.

Rector COMSATS University Dr. Raheel Qamar stated that the purpose of this park is to advance scientific education among the students. He explained that it would foster an environment of entrepreneurship within the country.

This will naturally create more jobs, which will lead to greater employment rates and ultimately boost the nation’s economy.

He added that the park would provide up-to-date tools and facilities of scientific and technological learning to students under a single roof. This particular development will provide relief to individuals all over the country who want to advance their research and studies, but have been unable to do so owing to a deplorable lack of appropriate facilities.

Dr. Qamar went on to state that the project will be initiated as soon as the feasibility report is completed. 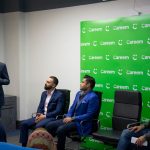