Last week news arose that the Senate standing committee on Information Technology and Telecommunication would approve the bill on Monday after which it would be up to the Senate to give the final nod of approval. Now the amended Electronic Crime Bill 2016 has been approved.

Under this law, acts of cyber terrorism, hate speech, fraud, hacking, and the distribution of pornographic material over the internet would be punishable acts. The punishments proposed in the bill include 14 years of jail for cyber-terrorism, and 7 years of jail for distribution of child pornography. A fine of PKR 5,000,000/- will be leveled on the convict in each case. In case anyone posts someone’s picture without their consent, they would be fined PKR 1,000,000/- and spend three years in custody.

All these punishments will be given by the court’s permission. A prospect of establishing dedicated cyber crime courts has also been discussed.

It is expected that the government’s new Cyber Crime bill could give Pakistan Telecommunication Authority (PTA) the power to become a regulating body of the Internet in Pakistan. This means that they would be able to remove, block or manage all content on the Internet.

For nearly a decade now, the PTA has been blocking website containing pornographic, blasphemous or otherwise questionable material. They very famously blocked YouTube on grounds of blasphemy and some small stints including Facebook and Twitter. 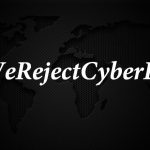 #WeRejectCyberBill is trending in Pakistan