Exceptionalism and sensationalism in the news media often give the public a distorted view of the socio-economic realities today and some people tend to feel that this is a bad time to be alive. The reality, though, is quite different. On the medical front, since 1900 the global average life expectancy has more than doubled and is now above 70 years. Today, more people die from obesity than from famine.  Education levels are on the rise and poverty is on the decline. Along with rising education levels, and poverty reduction, annual birth rates are plummeting. Take Bangladesh, for instance, which had a birth rate of 7 children per woman in 1971 and now has a birth rate of close to only 2 children per woman. Thus, the industrial revolution has resulted in some great progress.

Having said that, the industrial leap has had its share of cons. Climate change is one of the more prominent repercussions of the revolution. Climate experts are warning that under a business-as-usual emissions scenario, intense heatwaves, flooding, and mass migrations are imminent as early as 2050. The massive wave of consumerism since the industrial revolution has destroyed the natural world and its resources; this is a very unsustainable economic growth model.

While the Artificial Intelligence (AI) revolution hasn’t reached its peak yet, the coming decades might see great upward strides in AI and this can completely change life as we know it. The AI-centric world of tomorrow has the potential of making today’s world look quite archaic. There is reason to believe that the upcoming AI revolution—which is still in its budding stage right now—will entail its pros and cons.

Let’s go through some potential pros first. AI finds its application in domains ranging from healthcare to transportation. Owing to the eradication of human errors, self-driving cars have the potential to cut down road accidents by 90% in the US alone according to McKinsey & Co. AI can lead to a world where sensors monitor the human body at all times and detect any disease long before symptoms show up. AI can also help with decision-making; humans sometimes are not aware of their deepest desires and in such cases, AI can come in handy. All AI will have to do is process data from biosensors connected to us and communicate to us—on the basis of our blood pressure, temperature, etc—what we actually like and dislike.  We sometimes face a choice between multifarious options—like what profession to choose or what food to cook—and all options on the table seem logical. In such cases, we are unsure of our own inclinations. Well, AI can solve this conundrum for us—theoretically at least—by processing data from sensors attached to our bodies and telling us what we desire more.  Thus, AI will be better at communicating with us our own desires. It would be illogical to forego AI, keeping in mind its pros stated above.

AI has its cons too. One of the most intuitive ones is the potential for widespread job loss due to AI. The industrial revolution created jobs while also destroying them. Heavy labor-intensive jobs were handed over to machines as service sector jobs—which required good cognitive skills—were taken up by human workers. This time, the situation is a little different. If AI replaces cognition-intensive jobs—like the jobs of bankers, lawyers, etc—there could be an army of unemployed people. This could be economically unsustainable if these people are not supported using a universal basic income or similar schemes. AI is the ultimate dream of dictatorial regimes. AI algorithms processing data coming from biosensors connected to humans—in a country like North Korea and telling the government what someone thinks about the supreme leader—sound like bad news for pro-democracy advocates. If the AI algorithms tell the supreme leader’s cronies how badly someone despises the leader, such rebellious citizens will not have a bright future to look forward to. Thus, in such societies, things can turn Orwellian due to AI. Then, the idea of AI cyborgs taking control of our bodies and making all our decisions—which is a direct threat to the liberal idea of free will—can result in an inorganic takeover of our organic bodies.

As with almost any technology, AI cannot be completely shown the door. It will need regulations and new models—beyond the neoliberal model—to make it a force of good or things may turn out to be Orwellian. The industrial revolution resulted in political and economic movements like democracy, communism, democratic socialism, etc; it will not be surprising if the AI revolution brings its share of movements.

This article has been written by Shahmeer Mohsin. He has a double master’s in Energy Engineering from KTH, Sweden, and INP Grenoble, France. He has also worked at General Electric and the International Energy Agency in their Paris offices. Follow him on LinkedIn. 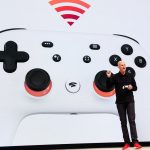 Google will put an end to internal games for Stadia