Snap Inc, the parent company of Snapchat, has filed for IPO that states company to be valued at $20 to $25 billion, seeking to raise $3 billion in the offering.

Snap released its SEC Initial Public Offering (IPO) yesterday which contained all the information about the company. Cofounded in 2011 by Evan Speigel, a Stanford dropout, Snapchat began as “Picaboo”, an iOS app. It soon became popular camera application for teens and young adults.

What does “Going Public” mean?

Investopedia defines it, “Going public refers to a private company’s initial public offering (IPO), thus becoming a publicly traded and owned entity. Businesses usually go public to raise capital in hopes of expanding; venture capitalists may use IPOs as an exit strategy – that is, a way of getting out of their investment in a company.”

The news about biggest technology IPO has been going around since last year. Snap is looking forward to raising $3 billion in the public offering. The company has been described in filing as,

“Snap Inc. is a camera company. We believe that reinventing the camera represents our greatest opportunity to improve the way that people live and communicate…In the way that the flashing cursor became the starting point for most products on desktop computers, we believe that the camera screen will be the starting point for most products on smartphones. This is because images created by smartphone cameras contain more context and richer information than other forms of input like text entered on a keyboard.” 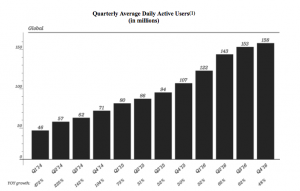 Evan Spiegel owns 22 percent of the company whose shares will increase by 3 percent when the company goes public. His annual salary starting in October was $500,000, and with the IPO he’ll get $1 million bonus every year. He also visited Pakistan in 2014.

Spectacles, Snapchat’s first device equipped with video camera went on sale in September for $130. Snapchat offers a lot of creative tools like Lenses, Geofilters, and Bitmojis that allow our community to express themselves through Snaps. It also provides chat platform, story-telling and Memories. 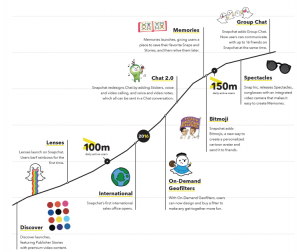 The company states many risk factors in the IPO which conclude that company may never be profitable again,

“Our ecosystem of users, advertisers, and partners depends on the engagement of our user base. We anticipate that the growth rate of our user base will decline over time. If we fail to retain current users or add new users, or if our users engage less with Snapchat, our business would be seriously harmed.”

Snap stated that there are factors that could negatively affect the growth including if it fails to introduce new and exciting products and services, does not provide compelling user experience, fails to combat spam, partners back out, regulations change, technical problems occur, etc.

The valuation at $20 to $25 billion will make it the largest IPO since Chinese Alibaba Group Holding went public three years ago. It would be the largest U.S. technology IPO since Facebook’s debut in 2012 with a value of $81.2 billion.

The whole SEC filing can be read here.