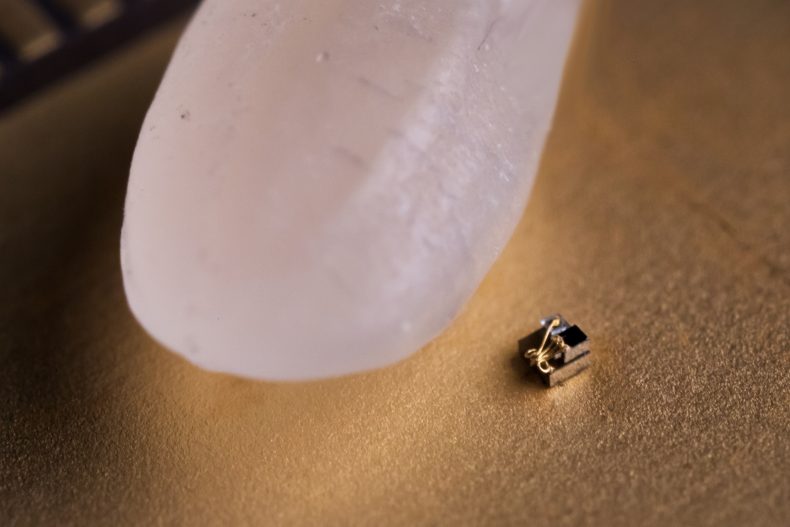 The world of tiny computing has been in frenzy since the last few months. The University of Michigan held the record of the world’s smallest computer until March, when IBM announced a computer measuring 1×1 mm, i.e. about the size of a pinch of salt. Engineers at the University of Michigan did not welcome this warmly, taking the challenge to heart and started to work on getting their title back soon afterward. Well, they have finally come up with an answer: A computer measuring just 0.3×0.3 mm!

Previously, IBM had raised questions over the exact constitution of a computer. Conventional PCs and smartphones etc. tend to retain data after they have been powered off while the micro-devices developed by both UM and IBM do not have the said characteristics. Both of them lose data as soon as they are turned off. Speaking to the University’s media outlet, Professor David Blaauw (who has co-lead the project) said, “We are not sure if they should be called computers or not. It’s more of a matter of opinion whether they have the minimum functionality required.

UM’s computer is powered by special photovoltaic cells that utilize light to power the device instead of conventional current. This enables the device to run on low-power (in order to safeguard the internal components against high voltages/currents). Speaking to the news outlet of the University David Blaauw said, “We basically had to invent new ways of approaching circuit design that would be equally low-power but could also tolerate light”.

The team that has designed the computer has quoted needs of the device in oncology, further elaborating that it will be used to research on the temperatures of tumors. Gary Luker, a biomedical engineering professor collaborated with UM engineers for the project. This is what he had to say about the device’s temperature sensing ability:

The University’s team itself, however, has acknowledged that the device is not capable of fulfilling the requirements of an everyday user and that it can only be utilized in scenario-specific situations such as the tumor issue detailed above. It has admitted that the inability of the device to store information disputes its status as a computer. Question is, when will we see micro-computers get released for the mass market?

previous
Xiaomi Redmi Pro 6 unveiled officially; features a 4000mAh battery and a notch
random
next
Google Translate usage jumps up by 30% in Russia thanks to the World Cup
Trending Posts