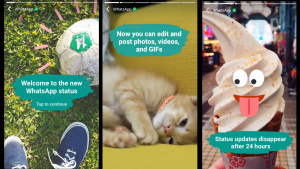 The ephemeral stories last for 24 hours and then automatically disappear. The popular messaging app, WhatsApp, was testing this feature as a part of a Status update since last year and now it’s officially launched. CEO Jan Koum wrote,

“We are excited to announce that, coinciding with WhatsApp’s 8th birthday on February 24, we are reinventing the status feature. Starting today, we are rolling out an update to status, which allows you to share photos and videos with your friends and contacts on WhatsApp in an easy and secure way. Yes, even your status updates are end-to-end encrypted.”

The distinguishing feature of WhatsApp’s revamped Status is that it will be fully encrypted to ensure the security. WhatsApp has also introduced two-step verification recently.

Snapchat was the first of all social media to launch ephemeral stories three years ago and billions of people use this feature. Another Facebook-owned platform, Instagram, introduced Stories last year and more than 150 million Instagrammers have used this feature since its inception. Facebook is also testing ephemeral Stories feature that will appear at the top of News Feed.

The interface is redesigned to incorporate a camera button in addition to Status, Chat and Calls tabs. In privacy options, you can choose the audience for your stories. 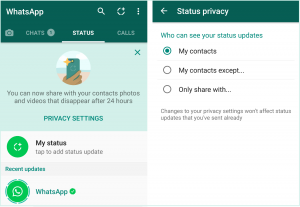 The feature has slowly started rolling out to all Android, iOS and Windows devices. Keep checking your app for the update. 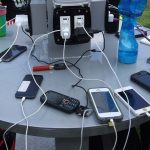