Why everybody should learn coding?

Not every job in the world is going to require you to program codes or talk to your computer in the language it understands. So, why should you learn to code? Even those who don’t have Coding as a part of their curriculum are now being encouraged to learn to code, with academies like Code Academy, Code.org, Code Club and so on. (For a Top 10 list of coding website, visit here)

Why are there so many resources now available to help everyone code? We do not want a world full of coders and programmers, do we? No. We don’t want that. As Mike Loukides, correctly points out in his article, “The reason everyone should learn to code”, “Learning to code is one of the few ways to break the cycle of poverty….A formal education in computing is certainly not irrelevant (that’s another discussion), but it’s also not an absolute requirement, and won’t be for the foreseeable future. And those jobs, whether they’re in web shops, back offices, or wherever, are much better than the dead-end minimum wage positions at McDonald’s and Wal-Mart.”

Also read: Difference between a Good Programmer and a Headache

Now, speaking in terms of a third world country which is still confused over YouTube blockage and Digital Rights Law, we Pakistani’s need ordinary citizens who know how to code. Not because it will get you a job or help you ask for a raise or just help you get on the bandwagon (Gullu Butts Kutt), but because it will inculcate in you the computational thinking approach towards life challenges, something we are lacking behind in.

Back in the 1980’s and 90’s, people needed to know coding to be able to operate their home computers. Students were taught how to work on MS-DOS and Visual BASIC. But now it’s a changed world. Even at undergraduate levels, students are taught how to use Microsoft Word and other software’s, which are quite easy to grab onto if you know where to click. In this digital age, software seems to be the language of our world. It might just happen, that if you are unaware of it in the future, you might get replaced by a machine. Life will become more challenging, rather than being a blessing.

You don’t only learn code for programming. Not everyone needs to become software engineers. No, we really don’t want that now! But what we want and should work hard for is to churn out a generation which is exceptional in solving problems rather than making them complex. A generation which knows how to use logic, algorithms and critical thinking to tackle larger issue by breaking them down into smaller, more manageable ones. It’s not only about writing software’s. The scope goes beyond 0101. Fields as diversified as Mechanical engineering, Physics and even Business studies are following rules that can be easily recognized with the help of computational thinking. It enables you to create abstract models of the real world and go from the most specific aspects of that model to general solutions, broadening your mental horizons and helping you to think out of the box.

Also Read: The problem with hackathons in Pakistan

Coding is a skill that everyone should learn. Not necessarily to become a professional software engineer, but to use computational thinking and logic according to your own benefit. Coding will help you to solve problems in almost any discipline, including your daily life- and guess what; it’s extremely fun and addicting. And who knows, maybe one of you who learns to code goes on to develop a Google like site, solely for Pakistan. Coding will help you get closer to your virtual dreams.

So, go on and sign up at CodeYear, which has a minimum commitment of one new lesson every week. According to them, an hour of training every weekday will get your interests level up. Considering the fact, that the lessons are free and the rewards are of multiple benefits, it’s a not a bad idea at all. 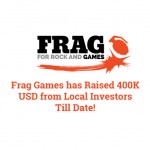 Lessons to learn from Frag Games Founders who have Raised 400K USD from Local Investors!