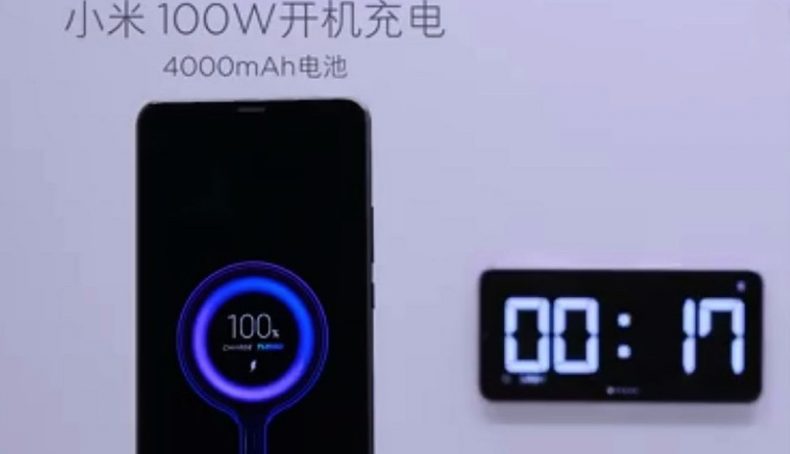 Huawei’s 55W charger for the Mate X might have blown people away with its phenomenal performance, but Chinese rival Xiaomi is looking to turn the tide in its favor by demonstrating a 100W charger that can charge a 4,000 mAh battery-powered phone in just 17 minutes.

Xiaomi chairman Lin Bin shared a video on Chinese social network Weibo showing a smartphone with a considerable battery capacity of 4,000 mAh going from 0 to 50 percent in 7 minutes and then proceeding to 100 percent in a dizzying 10 minutes.

This was compared to the charging capability of Oppo’s 50W charger that only managed to juice up a 3,700 mAh battery to 65 percent within that time interval. With some truly impressive charging technology, and the fact that its 50W SuperVOOC charger is the fastest standard available in the market, Oppo appears to have been well and truly trumped by Xiaomi.

To further emphasize the impact of this technology, consider this: the iPhone XS Max and the Galaxy S10+ feature hefty battery capacities of 3.174 mAh and 4.100 mAh respectively, and both of them could be charged from 0% to the max in less than 20 minutes!

This is an exciting development for Xiaomi and its fans, but it is also a meaningful achievement for technology as a whole. One of the most underrated aspects of a device has always been its durability on a single charge, because that ultimately contributes to its productivity and effectiveness. With charging speed like that, one won’t even have to worry about leaving a device charging overnight.

It might look like the whole thing is an experiment that Xiaomi has conducted to gain some more time in the daily tech spotlight, but as it happens, the company has grand plans to execute it. In fact, head of the Redmi sub-brand Lu Weibing confirmed that the charging technology will be going into mass production pretty soon.

There is no information as to when we can expect to have this technology in our hands, but this development certainly paints a great picture of the future of smartphone productivity.