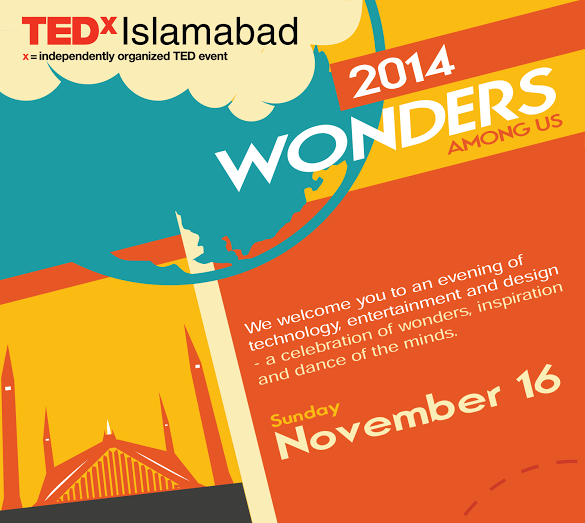 TEDxIslamabad will soon be upon us and as such it will once again usher us to a day of learning, enlightenment and expanding our horizons. TED is renowned for its inspirational talks, amazing guest speakers and the talks from said speakers that will definitely leave you more enriched with knowledge, TEDxIslamabad has always hosted a variety of gauging guest speakers bringing with them much more than just their physical presence. They endow us with valuable life lessons, inspire us with their words and actions which in turn can inspire to reach for the stars in ways that most motivational speakers might not be able to help us achieve. As TEDxIslamabad draws closer, here are my top 10 reasons for attending this years TEDxIslamabad.

With the theme revolving around the paradigm of wonders among us and with a tantalizing subtitle to help strike a wonder of intrigue in the mind of the reader, any person with an interest in the world of technology, design, or entertainment you would have to be an absolute hypocrite to your belief to miss out on this valuable talk that could spark a bit of inspiration inside of you to seek your aspirations and perhaps learn something from the entire concept of this years TEDx.

So far the revealed speakers of this year TEDxIslamabad consists of some of Pakistan’s most versatile speakers. We have prestigious personalities in Pakistan such as Dr. Pervez Hoodbhoy, Pakistans only PH.D degree holder in nuclear physics. While I admit I have a bit of bias towards this speaker due to him being an instructor at my university and having studied a few courses under his tutelage I can easily say that his words of wisdom have helped me think out of the box at many times and look forward to his views on this years theme.

Along with the prestigious doctor we are also graced with the presence of the amazing talents of Muniba Mazari, a girl who chose to not let her body be a limitation to her and despite being wheelchair bound she chose to explore boundaries beyond her reach and where she probably shot for the stars she ultimately reached the cosmos and continues to go beyond it!

Then we have a child prodigy, Khadija Niazai, where girls at the age of 10 were playing with dolls and other ways of unilateral thinking, Khadija chose to break away from the pack and explore the road less traveled. She was the first of her age and probably of her gender in Pakistan to even ponder about tinkering with the complex world of Artificial Intelligence, which is still baffling to the most educated of minds of children at her age and continued to eat fruits from the tree of knowledge even today! She is a true wonder since most kids her age; especially girls in Pakistan wouldn’t go near a computer much less learn about the perplexing wonders of Artificial Intelligence, this was the first step in her journey of learning and she has continued to go from one ship to the other without letting society dictate to her on what a “norm” should be. You go girl!

Being a proud Punjabi, I can easily say that Lahore Lahore hai! But when I do have the opportunity to travel to Islamabad, be it on en route to Murree or visiting Rawalpindi, there is a certain majesty of Islamabad that begs exploration and the serenity of the city is the best you can describe tranquility in Pakistan. The majestic mountain ranges are view-able from almost all of the popular places of the city and some people even have the luxury of stepping out to their balconies and terraces to enjoy a tantalizing view of the mountains and seek inspiration or simply escape from the loadshedding that has currently afflicted their home.

Don’t just go to Islamabad for TEDx. Go to Islamabad for the namesake. The city simply begs exploration and while the city may not be as rich in history as Lahore, Karachi or any other major cities of Pakistan there are still many sights and sounds to get engrossed in, one of which is the Shah Faisal Mosque which is a wonder in itself to behold! It is one of the largest mosques in the Muslim world and hence has gained fame for its reputation which you will easily find out, precedes it.

Saad Hamid. Those who follow him on twitter, facebook and other social media outlets are well versed and familiar with his endeavors and passions. To me, he is an old friend who I have bumped into only a couple of times but still managed to remember who I was with a single step down memory lane even though we never met prior and I knew him back in the days when DOTA on Warcraft 3 had hit its boom in Pakistan and he was telling me about all his dreams, which I am glad he has been able to achieve.

Having followed him on social media outlets I can say that he is indeed a gifted curator with a great skill in choosing speakers choosing the themes, picking attendees to ensure that all those wishing to seek knowledge aren’t left out.

Saad is a talented, gifted and skilled individual and I sometimes wonder if he hasn’t been replaced by an android, since I don’t think any other living human can possibly do all the stuff he does so actively without break. Heck, I can’t even think of what my next tweet should be and Saad has already tweeted an entire George R. R. Martin novel by the time I even have half my tweet done.

I can’t say I have been to the same number of TEDx as I have been to GDG events. While I only had the opportunity to travel to a single TEDx. The people there, the encounters and more importantly the atmosphere mesmerized me. It reminded me of the first day of my university, I remember the sensation that tingled within me to take every single class and learn as much as I can and learn what I can from whomever I can. I learned that grades are what I earn and not what I get from appeasing to the teachers better nature.

The atmosphere of a TEDx is so heavy with the scent of knowledge you can’t help but be stuck on every single word of the speakers and then sharing ideas and conversations with the other attendees on what their interpretation of the talk was. As a MUN’er it is important for me to learn what different aspects are there to a situation and to learn the different perceptions of people who are hearing the same thing I am hearing but are mentally processing something else is absolutely fascinating and as such I made many friends and acquaintances at that one TEDx. I hope to do so now with a bigger thirst for knowledge.

2014 saw the rise of Selfies. For years smartphones and dumbphones have always boasted front facing cameras but the actual social applications were taken up to the sky with the help of Selfies in the good year of 2014! We now see children as young as 7 years of age taking their parents phone and engaging in selfies. You can rest assured that Selfies will definitely be all the rage as soon as the talks come to a conclusion and with the presence of Saad you can be sure that the Selfies will be truly worthy of the event!

We are all old. Some of us could date back to the Mesozoic era and others probably remember having their Nokia 3310 as their first phone. I believe that learning never ends. No matter how old you are there is always room in the brain for you to learn and grow your knowledge. This can be done by several techniques but by far the simplest and most intuitive way would be to attend TEDx Islamabad. Whether you are coming as a teenager, young adult or someone who has recently entered the dull and slow lane life of “adulthood” doesn’t mean you stop your learning. There is still much to learn in this expansive world and many opportunities to avail. You never know what opportunities you are missing out on unless you take part as a listener in this event.

Don’t be attracted to a TEDx just for the speakers. Come for the audience. I have met a lot of interesting and educated people from various parts of Pakistan because of a single TEDx. You never know what diamonds in the rough lay in wait for you to meet and be friend. While the Fraaaandship has long since sailed from the days of Orkut you are never too late to expand your facebook friends list by meeting new people at these talks and discussing their ideas and exchanging interpretations and lessons.

The audience in TEDx talks are always very sophisticated people, so if you feel like an odd one out at your institute due to to your intellectual capacity exceeding those of the people around you, why not pick the brain of other gifted individuals attending TEDx and see if you have a friend waiting out there?

Pakistan is no stranger to problems. With all the political and economical turmoil plaguing the layman of Pakistan and in turn their families, this is a good way of hitting the pause button and being drifted away to a world of wonders and intrigue. You can dissociate yourself and be someone completely different at TEDx without the fear of anyone telling you how to act or think, this is a platform for free and open minded thinking and in a time when people are at the epitome of worry and stress couldn’t we all use a break and escape from the trials and tribulations that trouble us? Whether you are in O levels, A Levels, college or stressed out over your university work, a good TEDx is a MUST at least once in your life.

You must take it upon yourself to take part in at least one TEDx and since TEDxIslamabad is right upon us, why shouldn’t you take part? Applying for a position is as simple as filling out a google form and is free. What have you got to lose?

I hope you share the same reasons as I do for wanting to attend TEDxIslamabad and if you don’t share the same feelings let me know what are your reasons! 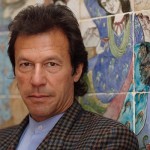