5 Brilliant iOS 9 Features That Were Worth Waiting For 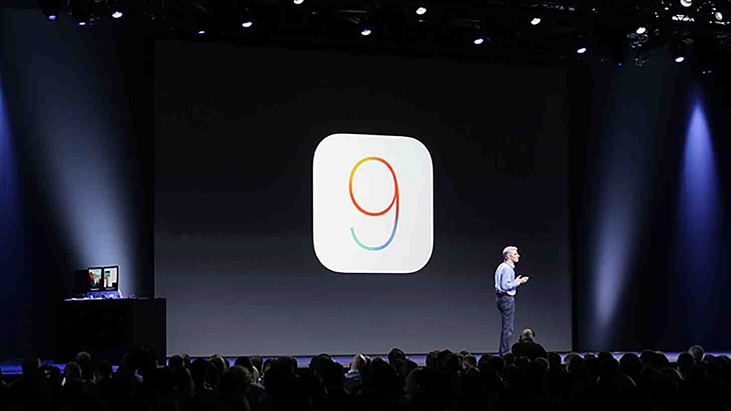 Apple’s WWDC (World Wide Developer Conference) was held yesterday, while the show did not reveal any new hardware, we were shown plenty on the software end. We witnessed improvements to the Apple Watch, Siri, and many other amazing features of Apple’s new iOS 9 that will come out later this year and an Open Beta coming in July.

Here are our top 5 picks of WHY iOS 9 should stand out for you? We know you will love to use these features in your daily life!

Microsoft has long had the dominance on their Windows 8.1 devices (specifically tablets, laptops, and, Surface) when it came to multitasking with the help of Windows Snap and Metro. The feature carried over to the Xbox One and became a roaring success. Recently, the Android M developer preview brought Multi-Window to the OS for every device that installs Android M. This used to be a Samsung exclusive feature in their high end flagship line.

Apple has joined in on the fun with not one, but three features that allow users to use their single screen more productively.

The first is Slide Over. 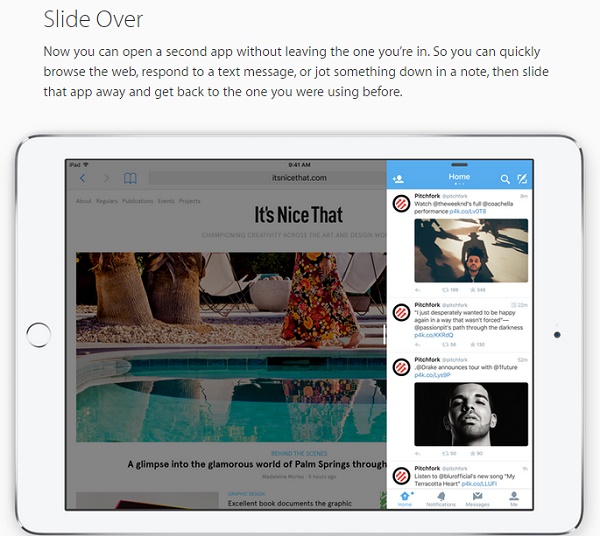 As you can see, this is indeed handy for people who want uninterrupted web browsing combined with multitasking capabilities. Such as a reply to a text, take a note, etc.

The next feature is Split View. 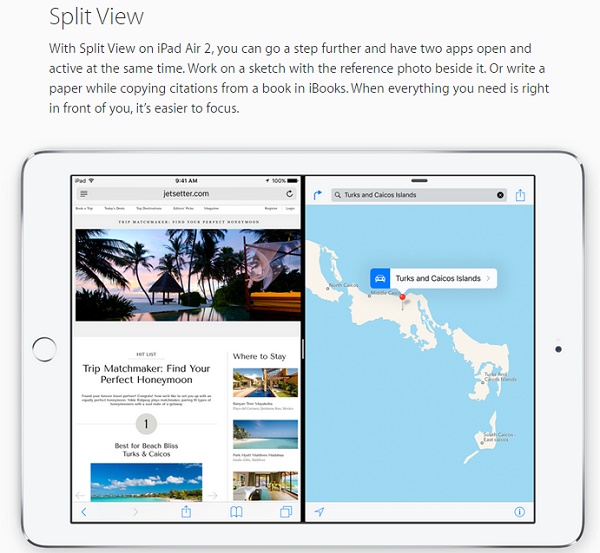 Split View is definitely made for the power users who want to get more done while being on the same screen. As someone who has constantly utilized Metro + Desktop to do assignments, I know that there is a user base out there that can take full advantage of this feature.

And lastly, Picture in Picture is something that will definitely be a dream come true for many. 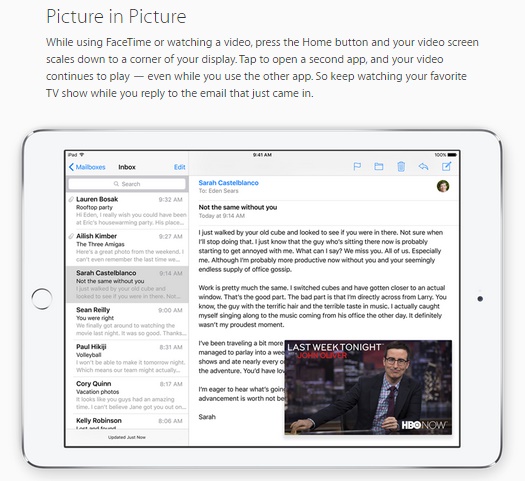 Typing on the iPad keyboard is a joy to behold. The iOS 9 gives you three new helpful ways to use the same keyboard so that you can make your typing life more convenient.

The first feature is Keyboard Shortcuts. If you hold down Command, Control or Option key, it will bring up an ALT+TAB esque app switch option for you. You can also choose to run a new app instead of switching to a currently opened one (Bluetooth keyboard might be required for this feature to work). 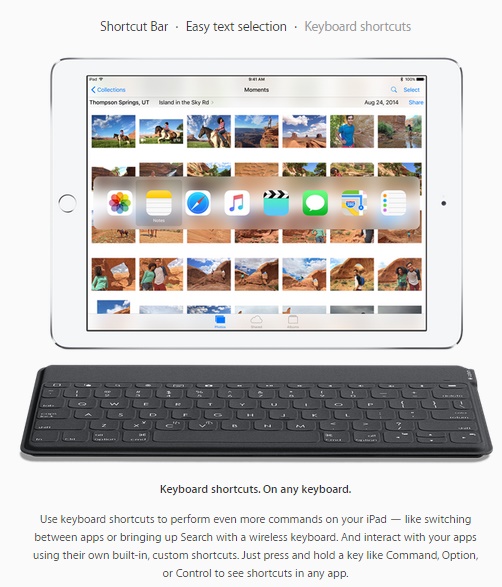 Text Selection is now even more easier as retina display and zoom combined made text selection on the iOS fun. Apple has found a new way to make it easier without even needing to touch the text. Now using two fingers anywhere on the screen, users can edit, select or move text as required. 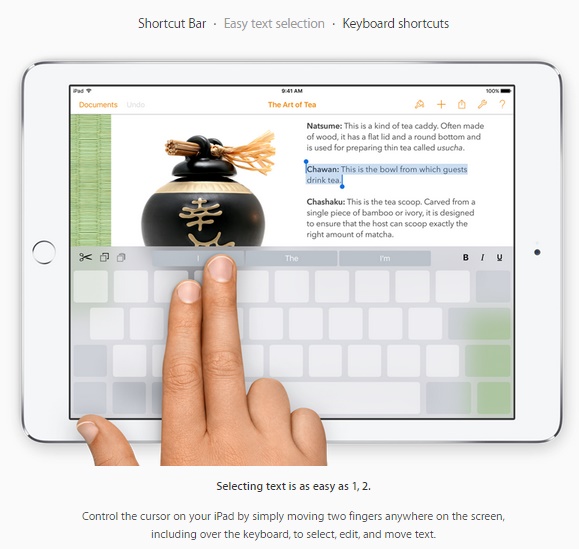 Last but not least, The Shortcut Bar on the keyboard will give you more options while typing which weren’t previously available on iOS keyboards. You can now make your text bold, italics, or even underline. This can come in really handy for emails and even social media to help make sure your point was delivered well. 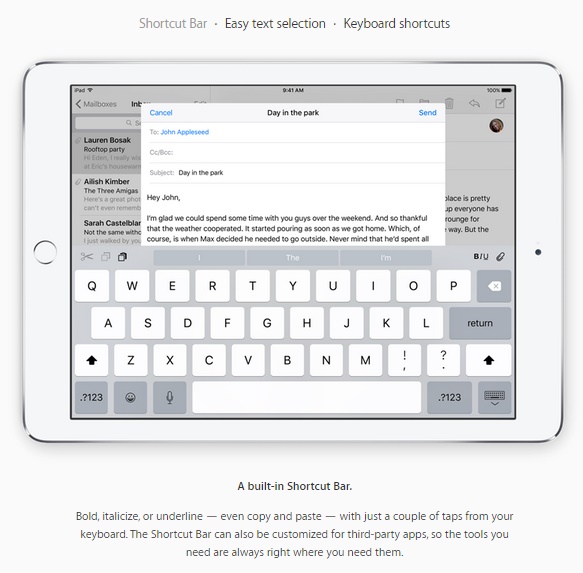 3. Improved security, a revamped Siri and migration from Android to iOS becomes Seamless

Now, while iOS 9 isn’t totally built for the iPad line, there are still some new features that iPhone users will surely adore. These are some features that we know you will simply fall in love with.

The first addition is security. Two major changes have been made in this regard: Two Factor Authentication for your Apple ID, a feature that I am sure Apple fans will definitely love. Six Digit Passcode, while you might feel it as a placebo of sorts, this is still a helpful feature to bolster your personal security. Otherwise, you still have passwords and Touch ID. 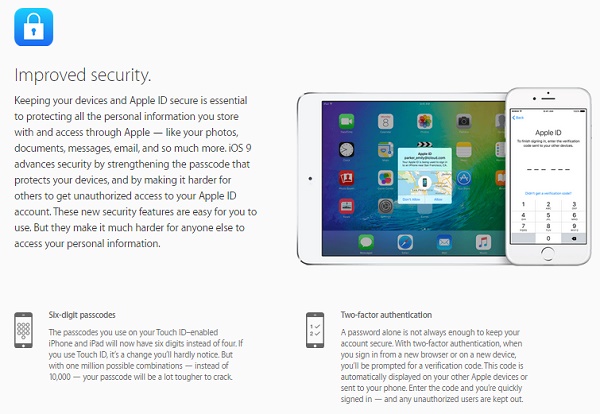 Siri has come back with a bang. I won’t even go into how much the Voice Assistant has progressed in iOS 9, let the images below do the talking. 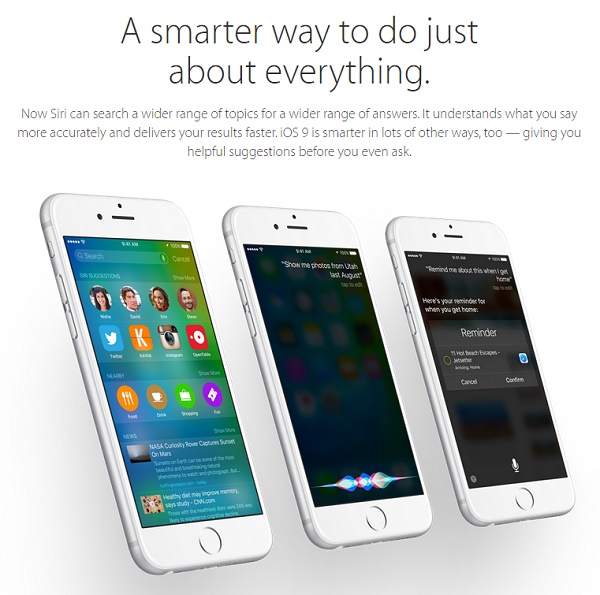 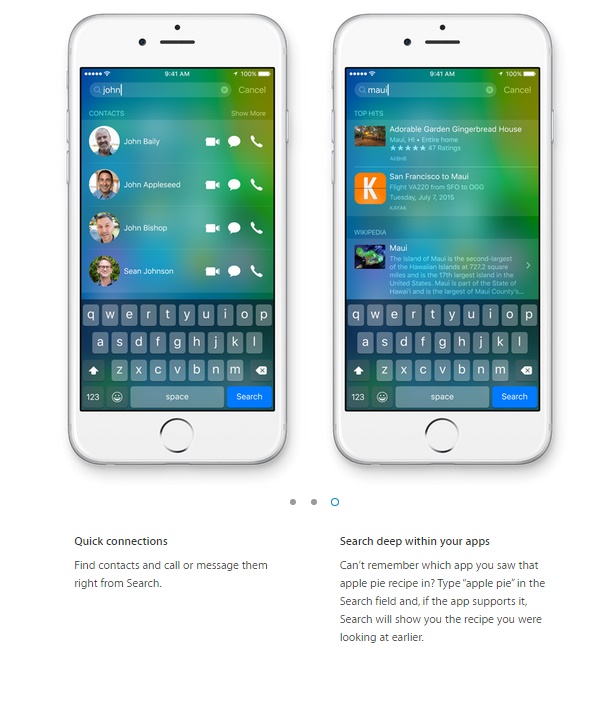 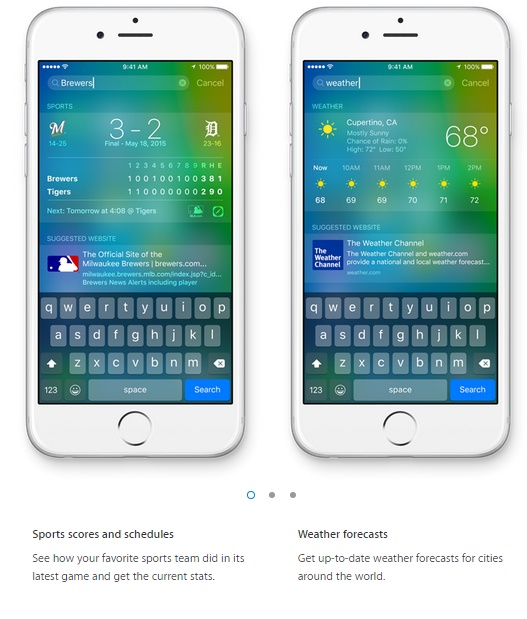 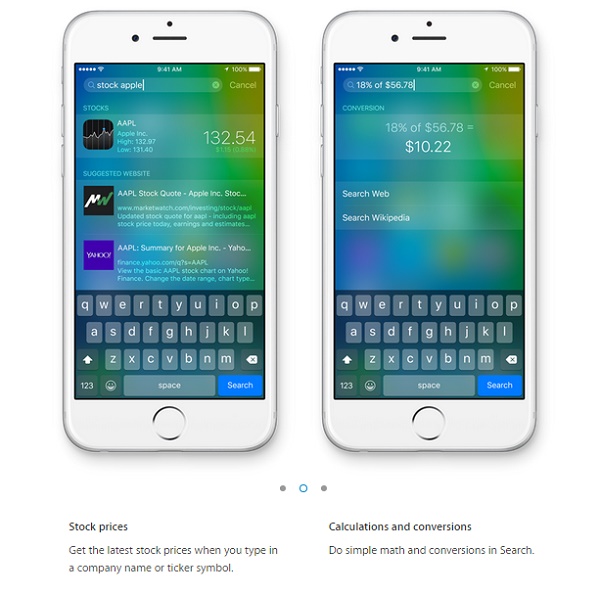 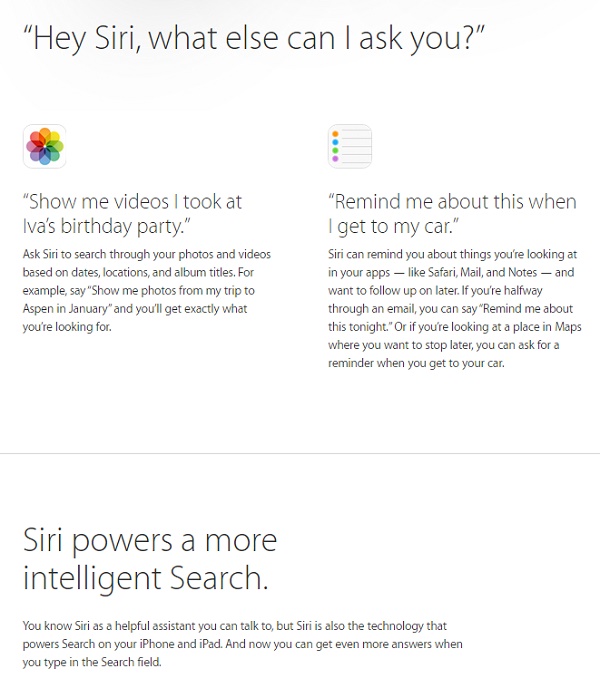 And lastly, the feature that I am sure many Android users will HAVE to appreciate. An App that will help Android users wishing to migrate to iOS making their transfer a simplified process. The app will help users carry over contacts, gallery items, messages, web bookmarks, mail accounts, and numerous other things that you will need in the shift.

4. Search has been given a massive lift and Apps will intuitively integrate into your life

This function will be useful for users who have been using the search function on their iDevice by swiping down on the home screen, Search has also been revamped and made to be almost as intelligent as Siri. Don’t believe it? See the new additions to search. 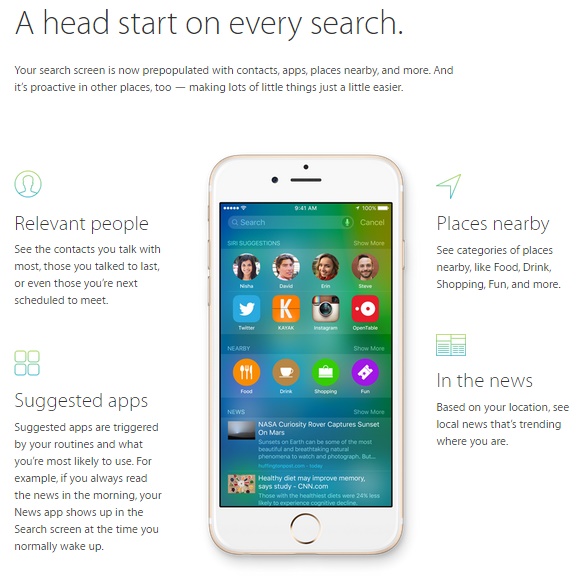 Apps on the iOS are no longer 2 Dimensional, these apps will now respond and give you suggestions, especially the ones you frequently use. 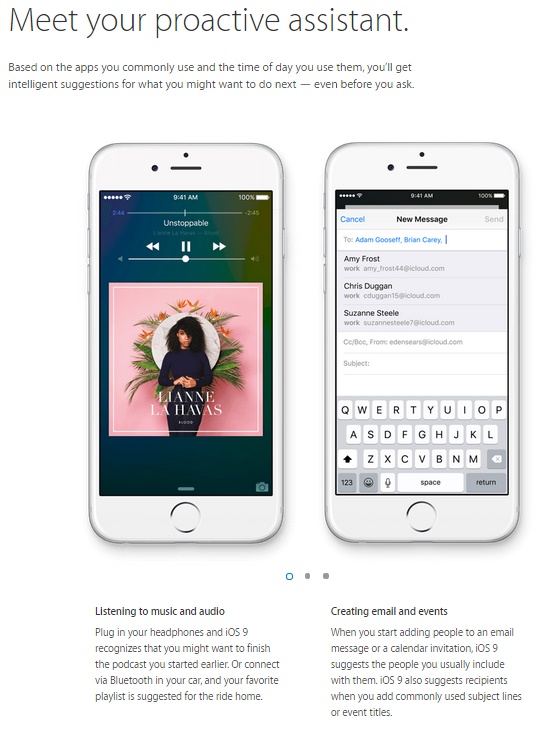 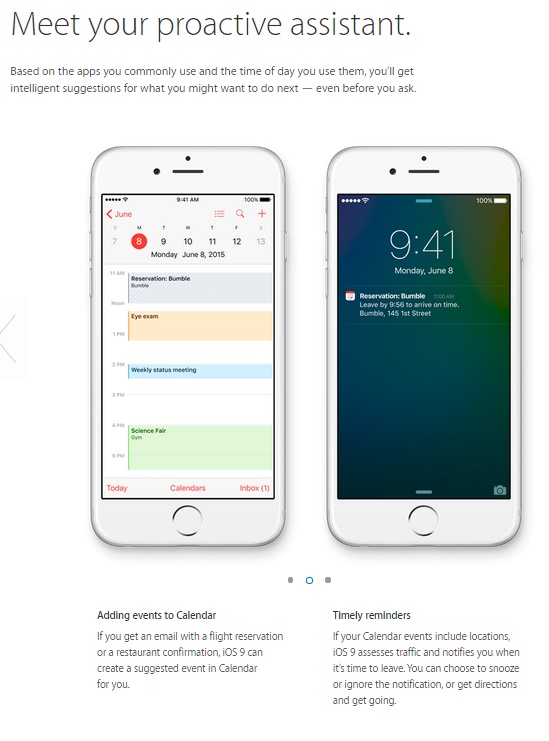 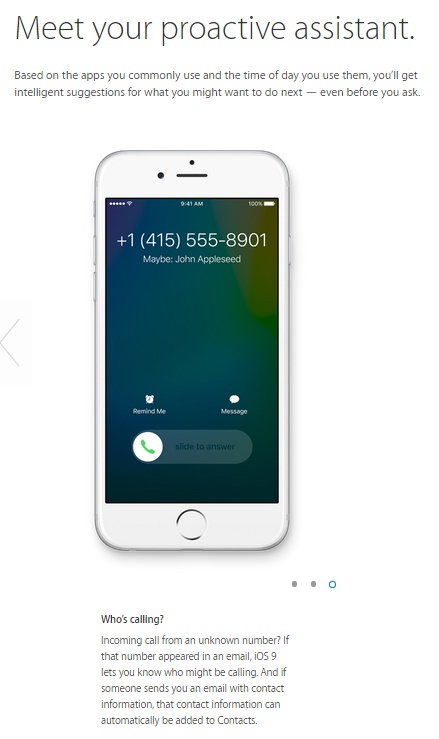 5. How will the new software help the hardware and endless compatibility galore?

All these new features show us how immersive our experience will be on iOS 9, but did we stop to think that there will be a trade off? Battery life? Lesser performance? Nay. If anything, iOS 9 will help give you more Battery life, improve your CPU performance AND make updates seamless and more friendly process. 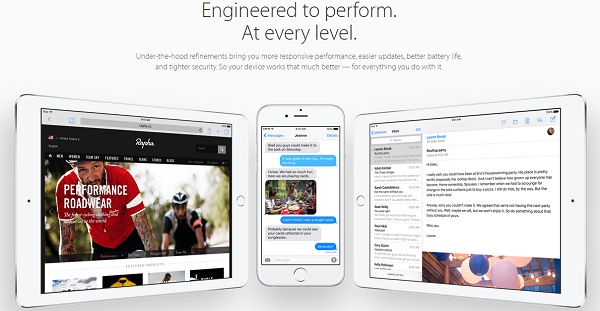 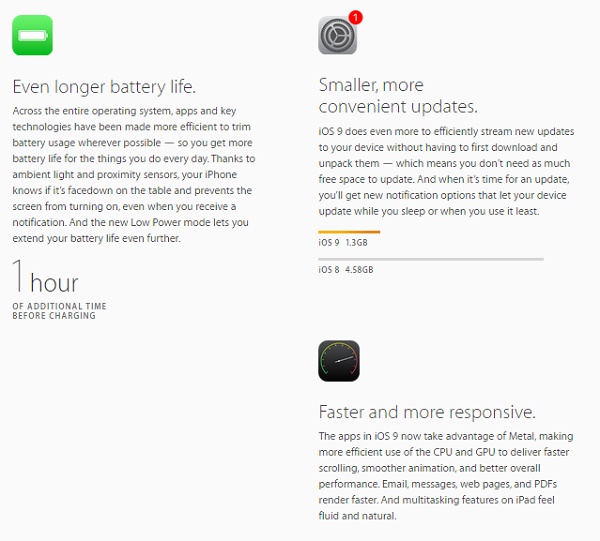 Lastly, if you are on the edge of your seat wondering if your iPad / iPhone / iPod will support these magnanimous changes. Then you will be glad to know that every device after the iPhone 4S is fully supported! Being compatible with the iPad 2, iPhone 4S and the 5th Gen iPod is truly remarkable. Well done, Apple! 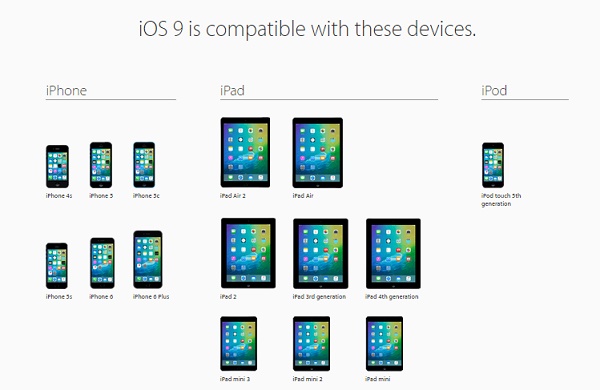 So guys, these were our top 5 picks of iOS 9, if you are still curious about the many other changes that iOS 9 will usher in, then feel free to Click Here and see what else there is to offer.

What is your favorite or least liked feature in iOS 9? Leave us your thoughts in the comments below! 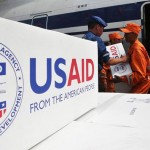