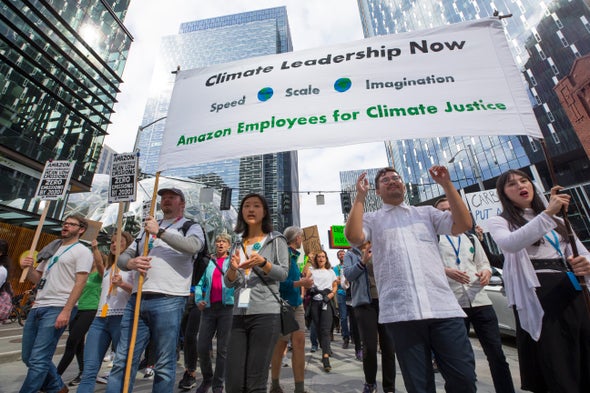 Climate change affects all of us. Every individual leaves a huge carbon print during the course of their lives. Many attribute the vast deterioration of climate change to industrialization, which not only led to burning of fossil fuels, but the steam from steam engines began to pollute the air. Our advancement throughout history has had a huge impact on the environment.

Recently there have been demonstrations and protests all over the world, and all over Pakistan too, where people have called for a change in policies that affect climate change. Technology plays a part in adding to the deterioration of the ozone layer as well as rising sea levels. However, it also plays a part in reducing our carbon footprint, and reducing pollution.

The CEO of Amazon, Jeff Bezos pledged to use renewable power supply, and they will build it if they have to. This has been called the “Climate Pledge”, It may just be the world’s biggest climate-change protest. This renewable energy will supply 80% of the company’s electricity requirements by 2024, and will rise to 100% by 2030. This plan extends to cut off all carbon emissions by 2040. This is one of the best plans we have come across to combat climate change.

Amazon is taking its social responsibility very seriously. They have pledged a $100 million to guard forests, wetlands, and restore other ecosystems. While these efforts are laudable, and other similar companies, should follow their examples, critics point out that Amazon has a lot of operations which are not eco-friendly. These include air freight, and carbon-heavy transportation will still be operational.

The company has its own Climate Justice group, who said that while these amends in the company’s policies are commendable, they have not gone far enough. Amazon is an ally to oil and gas companies to extract more non-renewable fossil fuels, and is known to fund think tanks and politicians that deny climate change is a real phenomenon.

Google has also stepped in the forum, and with them donating a $2 billion in renewable and new energy alternatives like solar and wind turbines. Google has been carbon neutral since more than a decade, and has committed to reducing their operations which use non-renewable energy. Workers at Google and Microsoft are also expressing their concerns about what their companies are doing to reverse the effects of climate change.

Since most carbon emissions come from the world’s greatest cities, the Big Apple has pledged $20 billion to save itself. New York is surrounded by water and islands, like Staten Island, and bridges. The rising sea levels can immediately impact the City of Skyscrapers and lights. It is also one of the most hi-tech cities in the world which has one of the most sales of Apple products. They are making small changes which can have long term effects like street trees and painting all rooftops white. China, the biggest contributor to development, technology and also carbon emissions, has also taken a stand to clean its air by planting vertical trees and plants on their tall buildings.

What do you suggest Pakistan, and its manufacturing industry, should do to reverse its carbon footprint? Let us know in the comments below.