The long-awaited feature, which has been a dream of every SMS lover is finally going to make an appearance in Android 8.1 Oreo.

Android 8.1 Developer Preview is already available and the stable version is just a few weeks away. The new version of Android will bring a lot of new features, some big and some small. One of the most interesting features coming in the new version of Android is Chrome-SMS integration. Which means that you’ll be able to synchronize your SMS messages from Chromebook and the new feature will be called “SMS Connect”.

However, the feature may only be available for Chromebooks in the beginning but it may soon make its way to Chrome browser for Windows and Mac as well. The integration will let you receive and send SMS through Chrome browser. The feature is very handy as you won’t have to pick up your phone, again and again, to reply to SMS messages while you are busy working with a spreadsheet on your PC.

What else is new in the update?

The new update will enable the Pixel Visual Core on Pixel devices. Pixel Visual Core is a discrete, custom image processor available in Google Pixel 2 and Google Pixel 2 XL. It is the first custom-designed co-processor for consumer products and it is designed to deliver lower-latency and even more power-efficient HDR+ processing. Not only the Google Pixel’s main camera, the other camera apps will also be able to take advantage of the Google’s new HDR+ image processing technology.

The new chip will work independently of the main Qualcomm Snapdragon 835 chipset and it includes a single Cortex-A53 CPU core, eight Image Processing Unit or IPU cores and LPDDR4 memory. Again, its specifications have nothing to do with the Snapdragon 835 as it is totally independent. The only problem is that this chip was not enabled until now and the new Android 8.1 update will enable it. Google says that once enabled, the new chip will enhance image processing by 5x and it will take 1/10th of power compared to the Snapdragon 835.

The new update also includes Android Go optimizations. Android Go is targeted towards devices with 1GB or less RAM. Google is making its operating system efficient for ultra-low-end devices and manufacturers will be able to make devices with less than 1GB RAM now. 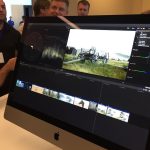