Every year, Apple announces the new installments in its series of technology products. The announcements are followed by analysts’ estimates on how many of these will sell, the actual release, people flocking to the iconic Apple stores, millions of units getting sold, and finally, Apple announces strong quarterly profits which unsurprisingly beat all the estimates. And the cycles continues.

In a continuation of this streak, the Cupertino-based technology giant has broken the record of the biggest quarterly profit ever announced by a publicly-traded company. Apple, this Tuesday, posted its highest-ever revenue and earnings figures for the first quarter of the 2015 fiscal year which ended on Dec. 27th. The net revenue, according to the announcement, amounted to $74.6 billion while the net profit was a record-shattering $18 billion.

Previously, the highest quarterly profit posted by a public company came from ExxonMobile in Q2 2012, and it had amounted to $15.9 billion, according to the analysts from S&P (Standard & Poor’s).

Strong sales figures of the flagship smartphone devices, iPhone 6 and iPhone 6 Plus, served as the keystone for the profits. Apple went on the smash the Wall Street estimates throughout the Q1 2015 by selling 74,468,000+ (74.46 million) iPhone units, which contributed over $51 billion to the total revenue of $74.599 billion, against a financial industry’s estimate of less than 70 million. iPad sales added up to 21.4 million units, contributing $8.9 billion to the sales. Finally, the contribution of Mac products was $6.9 billion with 5.5 million units sold throughout the quarter.

65% of the net sales from the quarter were accounted for by international sales, with $16 billion coming just from Greater China region. These unaudited figures from Q1 2015 compare to the revenues of previous quarter (Q4 2014) and last year’s first quarter (Q1 2014) as $42.1 billion and $57.59 billion respectively.

Apple CEO Tim Cook, in an official statement released following the earnings announcement, remarked: “We’d like to thank our customers for an incredible quarter, which saw demand for Apple products soar to an all-time high. Our revenue grew 30 percent over last year to $74.6 billion, and the execution by our teams to achieve these results was simply phenomenal.”

Apple has estimated a relatively modest revenue estimate of $52 billion to $55 billion for the second quarter of 2015 fiscal year; no wonder here since last quarter revenues are usually far greater because of iPhone sales at year’s end. Moreover, Apple is expected to release its first homemade wearable Apple Watch in April this year. Analysts and critics do not seem overly confident about Apple Watch but exactly what impact a new product category will have on Apple’s revenues yet remains to be ascertained. 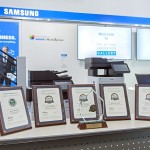