In a recent blog by Google, the company announced that their flagship OS called Chrome OS will now feature a built-in screen recorder enabling students to record long virtual lessons for their studies.

Chromebooks have been recently known to be the most popular computers used by students to work on different projects, taking notes, etc. Moreover, the OS update now also helps educators to accelerate a student’s learning throughout these unprecedented times.

The feature is relatively simple as the user can simply press a button to start recording and a countdown will begin at the center of the screen. Once the countdown has ended a red circle will appear on the right side of the screen.

Moreover, the update now also features a ‘Family Link’ system, enabling parents to monitor their children’s activity on the device. Google has further planned to launch over 40 new Chromebooks this year where every model will be equipped to deliver exceptional Google Meet and Zoom experiences.

With the education sector globally using virtual tools, it’s no surprise that tech giants have been geared towards providing students with the best tools to eliminate barriers to education. 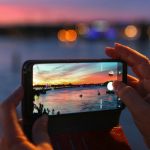