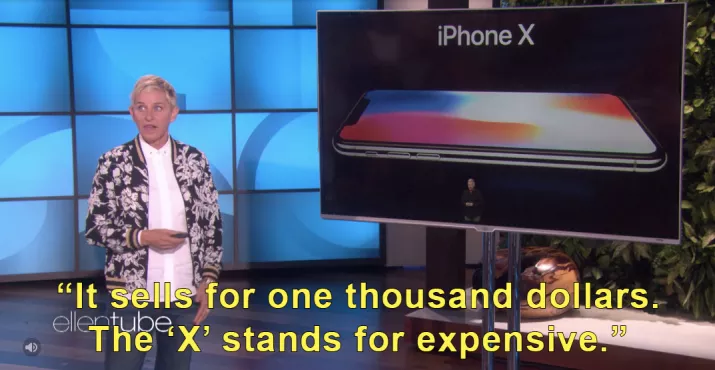 The much-awaited Apple Keynote 2017 took place on September 12 and the world is abuzz with all the new announcements that were made there. Apple introduced the Series 3 Apple Watch, upgraded the Apple TV, unveiled three new flagship smartphone including the iPhone 8 and iPhone 8 Plus but the world just can’t seem to get enough of iPhone X.

For months, speculation had been running wild regarding the new flagship. Now that it is finally here, Apple fanatics are head over heals for it while some people have turned it into the butt of all their jokes. Including TV’s funny woman Ellen Degeneres. In yesterday’s episode of The Ellen Degeneres Show, she took full aim at the iPhone X with some hilarious jokes and answered our burning questions regarding the new phone.

What happened to the iPhone 9? 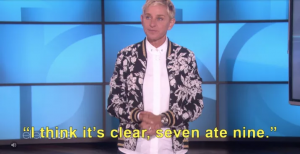 This really is the burning question, isn’t it? Why did Apple jump straight from the iPhone 8 to iPhone X? If you think about it, Apple played a clever move here. It’s competitor Samsung came out with the S8 this year and the next year when they release the S9, Apple will already be two steps ahead and ready to launch the new iPhone XI for all we know. It’s all about playing with the consumer psyche.

The X stands for… 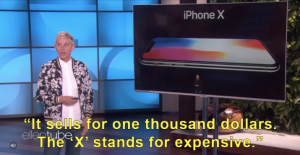 All previous iPhones had been numbered using numeric digits but with the iPhone X they have deviated to Roman numerals, just like they did with the OS X. But when you pronounce X, it will actually be called ‘ten’ or you could go with ‘expensive’.

She had some insights to the new glass design

The iPhone X is strongly reminiscent of the iPhone 4 which had a glass body – front and back. If you remember clearly, a lot of people who were clumsy and bought the iPhone 4, then had to walk around with a shattered phone. That may be the case with the iPhone X too. Although Apple vows that it is ‘the most durable glass’ ever used in a smartphone.

She took a dig at the wireless charging feature 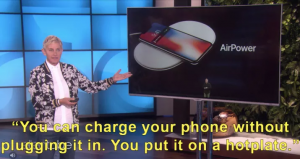 A lot of people made fun of Apple for finally catching up to the rest of the world. Wireless charging has almost become a standard in the tech industry and numerous phones from manufacturers like Samsung, Lumia, Nexus, and Blackberry have the wireless charging feature. 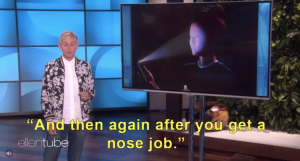 A lot of us are confused about the facial recognition feature in the iPhone X. While it does sound cool, it really won’t be the most effective or discreet way to open up your phone in public.

Update: A previous version of this story did not mention that the images are from Buzzfeed. We apologize for that. 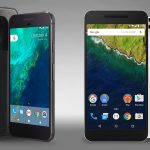