Elon Musk is nothing short of ambitious. And his most recent announcement is further proof of that.

At the conference, Musk stated that he plans to make his entire fleet of current SpaceX vehicles – the Falcon 9, the Falcon Heavy, and the Dragon spacecraft – obsolete, in order to finance his plans to colonize Mars. He plans to shift the focus of all his SpaceX resources to develop a spacecraft called the ‘Interplanetary Transport System’, which goes by another cooler name – BFR aka Big F*cking Rocket.

First opportunity to land BFR with cargo on Mars is 2022, followed by BFR crew and cargo missions to Mars in 2024. https://t.co/kCtBLPbSg8

He was quoted saying, “All our resources will turn toward building BFR. And we believe we can do this with the revenue we receive from launching satellites and servicing the space station.”

Also Read: Dubai is spending $140 million to build a city that looks just like Mars

He also took to Instagram to unveil some of his mockups for Mars settlement.

Mars City Opposite of Earth. Dawn and dusk sky are blue on Mars and day sky is red.

The BFR will be used to take Earthlings to Mars for settlement purposes by 2024, take two cargo missions on the red planet by 2022, or even take people anywhere on Earth in under an hour.

Elon Musk’s plan isn’t just to take people to Mars, he is aiming for a sustainable life there. As a result, SpaceX will also be building mining, power, and life support infrastructure. The first settlers will be sent to Mars with two separate cargo flights that will include sustenance material and the supplies to prepare the planet for future Earth settlers.

This is quite an exciting plan. But several bumps in the road can be expected which may delay human settlement on Mars from 2024 to a future year.

Watch Elon Musk talk about his plans in this video: 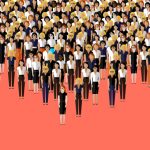