Social media platform Facebook has rolled out massive updates for groups admins, enabling admins of the groups to analyze and manage their groups with more ease. Facebook launched this new feature at its Community Summit held in Chicago.

“Groups have been around since the very beginning of Facebook,” Chief Product Officer Chris Cox said. “The original Facebook was more of a communities product than it was about friends”.

The tools which Facebook are now offering to group admins are group insights, membership request filtering, removed member clean-up, scheduled posts and group-to-group linking. According to the company, these tools will help the admins to manage the content on their groups with more effectiveness and facilitate them with the busy job of handling a group. 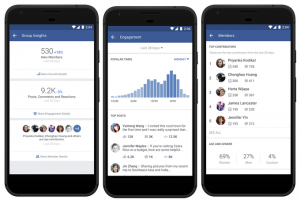 With this new tool Facebook has allowed groups admins to customize membership request like if an admin is running a sports group and he/she wants people with specific age, gender or preferences, the admin can do it with this new tool. Moreover, with another removed clean-up tool groups admins can delete and remove any person and content from their group with only one step.

Furthermore, the tech giant has announced that it will now tighten its platform and make it hostile for terrorists and malicious posts. Facebook is planning to hire 3,000 employees to filter out malicious content from its platform.

You will soon share any type of file on WhatsApp