Showcasing some cool future technologies at the Tech World Transform event, Lenovo showed off a laptop which you can roll like a page.

Lenovo’s Senior VP Commercial Business, Christian Teismann, presented the laptop yesterday, during the event in New York. Called Lenovo Transform, the laptop, as unveiled, appears to be fully bendable with flexible screen. When folded, the laptop looks a bit like a file folder. The laptop is built onto one structure with a built in keyboard. 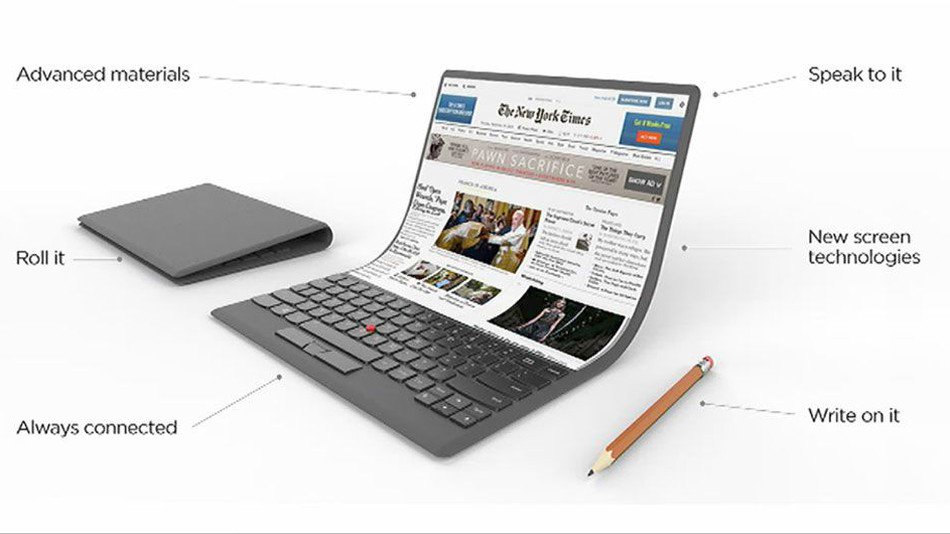 The laptop doesn’t seem to have a trackpad. There are two buttons at the bottom, one for right and one for left click. Although the analogy behind removing the trackpad is still unclear, the laptop includes a new medium for directing commands and the users would be able to “Speak to the laptop”. The laptop will also feature a touchscreen usable through a Stylus pen shaped like a pencil.

As far as explaining about the technologies that would power the laptop, Lenovo appeared to be rather unclear. For example, the company said that the kind of display would be achieved by using “new screen technologies” on “advanced materials”. The unveil might signal that Lenovo is researching to make these kind of laptops but there is still a long way before it is able to come up with a marketable product.

We know that the flexible screens are no longer a thing of the future for tech giants are already working to make them. Samsung was even able to show off a 9.1 inch stretchable display during the recent Display Week.