Google and Facebook are the dominant players in the digital advertising market, leading the chart with 57.6%, according to a survey by Visual Capitalist.

About $0.60 of every dollar spent in digital ads goes to Google and Facebook. Google, being the older player, enjoys 41% of the share. Facebook is quite new to the digital advertising. Traditional advertising will be replaced by digital advertising in a few years, according to the analysts. There are still some people who watch TV and read newspapers, but by 2019, the major source of advertising would be digital media.

Other companies that enjoy scraps in the chart are Microsoft, Yahoo, Twitter, LinkedIn, Yelp, Snapchat and more. The site states,

“In the digital advertising landscape, it’s all about the power of platforms. The majority of our chart is loaded with companies that have created (or bought) platforms full of user-generated content that people use every day. Facebook, YouTube (owned by Google), Twitter, Snapchat, LinkedIn, and Yelp all make the cut on our chart, because they have gained massive scale. In a nutshell, this is why the best technology companies have overtaken names like Exxon Mobil or Walmart to be the largest by market capitalization in the world.”

Visual Capitalist is a Canadian media firm launched in 2011. It is known for its exclusive infographics and curated contents from around the web about the business and emerging technological trends.

Digital advertising or Online advertising or Internet marketing is when businesses leverage internet technologies for promotion purposes. The promotional messages are delivered through emails, social media website, search engines, banner ads etc. Traditional advertising includes TV, newspapers, magazines, journals, radio etc. Digital advertising is much more effective than traditional ways, providing ease of access to the news. It is more convenient for both, the customers and the marketers. 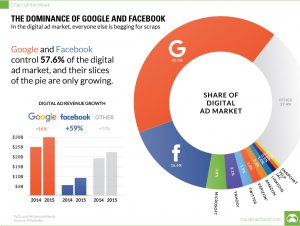 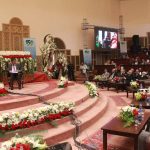