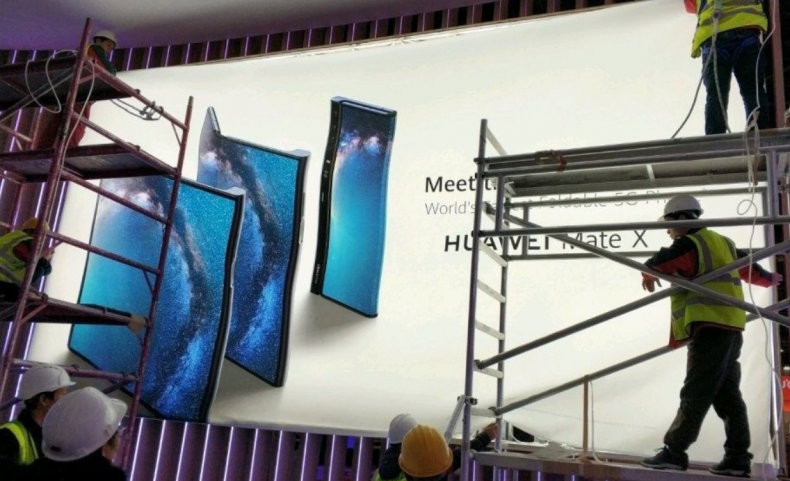 A few days after the launch of Galaxy Fold, Samsung’s foldable smartphone a new leaked banner shows Huawei’s plans of releasing its version of a foldable phone.

Originally posted on the Chinese social media, the image of the poster was circling on the Internet, purportedly showing off the design of the Huawei Mate X. The picture was taken from the preparation of the banner for the upcoming Mobile World Congress 2019, where Huawei is expected to launch its foldable phone. As seen from the image of the phone, the design portrays a completely different concept as opposed to the one Samsung adopted with its Galaxy Fold.

Unlike Samsung‘s Galaxy Fold which has two different screens; one on the outside and the larger one on the inside (when unfolded), Huawei‘s Mate X has a single screen which folds over itself much like Xiaomi and Royole’s implementation which tells more about how the Chinese smartphone industry sees the implementation of a foldable phone. Some Potentially good news can be that Huawei and Xiaomi’s foldable phone could be much cheaper than Samsung’s Galaxy Fold since there isn’t an additional screen and a plethora of cameras.

Another thing to notice is that compared to Galaxy Fold which is a lot chunkier, Huawei’s, Mate X seems much slimmer and sleek in design. This, of course, comes down to the different design approach that the two companies have selected, but from a realistic perspective, price matters the most and Huawei may have sealed the deal there. As the competition between Samsung and Huawei increases, pricing will become an integral factor for both of these company’s future smartphones and whoever offers more bang for buck will have a greater market share.

Of course, there’s still a lot more we don’t know about the Huawei Mate X. No pricing details have been leaked as nothing was mentioned on the banner, although the banner does indicate that the device will feature 5G connectivity. In any case, we won’t have to wait long as Huawei is set to host a press conference on February 24th to unveil a slew of new products including its foldable phone.

previous
Facebook is using apps to gain personal information like weight, heart rate and even mensuration details!
random
next
How the Galaxy S10 stacks up against the iPhone Xs and the Mate 20 Pro
Trending Posts