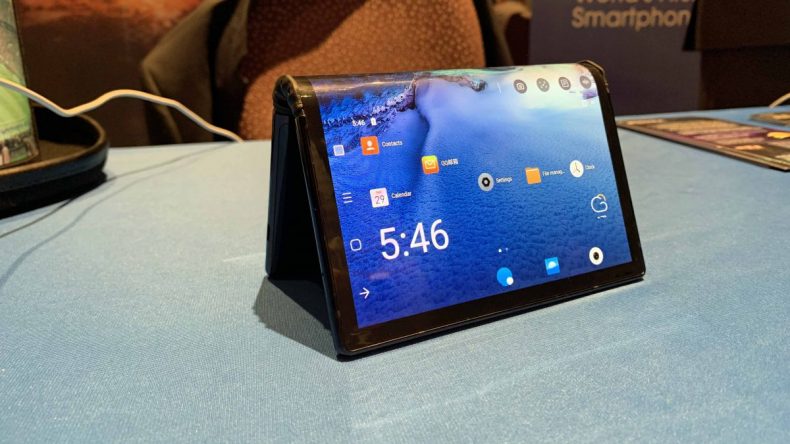 World’s first foldable phone, Royole FlexPai officially launches at CES 2019. The phone at the moment is only available to consumers in China but in the following months, it will be available worldwide.

The second half of 2018 was filled with foldable phone leaks and rumors, the drama was finally put to rest when Samsung partially unveiled their foldable phone during their developer’s conference. However, an unknown Chinese company, Royole has officially released their phone to the consumer company and in this process became the first company to officially launch a foldable phone. In fact, the foldable phone, FlexPai has been available in Beijing since October and started shipping to Developers in December.

The phone is likely to come with top of the line specs, as per the rumors the Royole FlexPai will be equipped with Qualcomm’s latest and greatest Snapdragon 855 processor and comes in two variants, one with 6GB of RAM while the other with 8GB of RAM. The striking feature about the device, however, is its foldable screen with an unorthodox flex, instead of bending outwards the phone seemingly bends inwards, thereby exposing the full screen to possible damage such as scratches or the phone being dropped.

According to Royole, the company has tested the folding mechanism and it’s good for another 200,000 articulations, which should be enough for most people in their lifetime. However, the design of the phone is far from perfect and many may argue that Samsung’s design approach is much better, robust and practical. FlexPai is expected to cost somewhere around $1300 for the 128GB variant and $1,450 for the 256GB variant.

The phone however covered one interesting aspect and that was the way it flexed back to a tablet form and can be easily used like one. Huawei’s CEO had something similar to say last year when he stated that their upcoming foldable phone will replace the need of a laptop. With the availability of 7nm chip which provides processing power equivalent to modern-day laptops, the idea doesn’t seem far-fetched. Let’s see what the foldable phone market has in store for us.