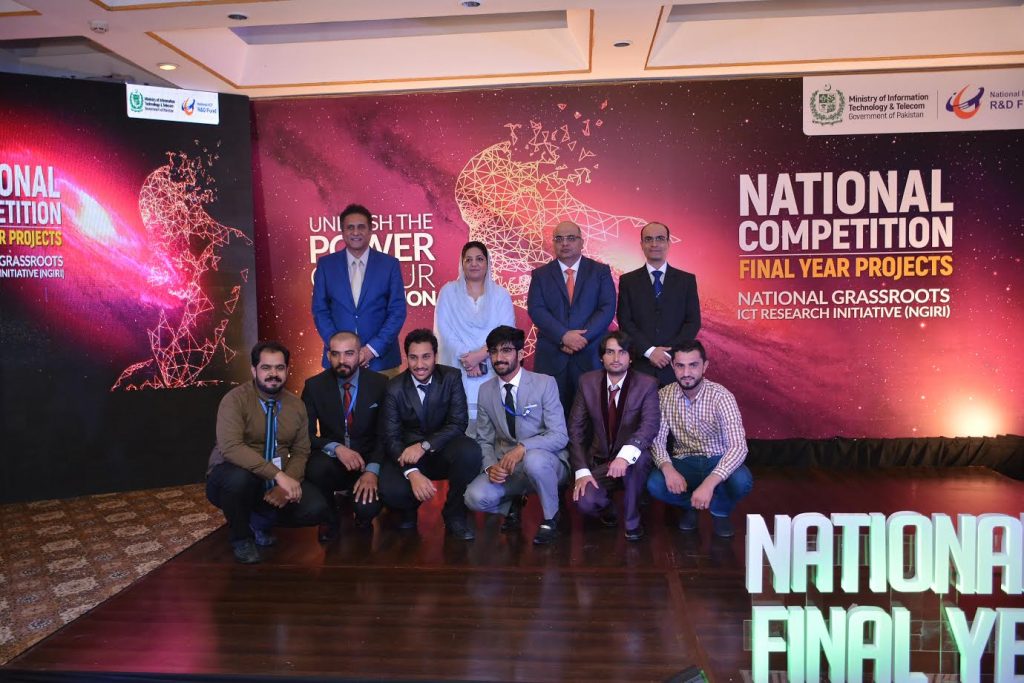 On last Friday, the National ICT R&D (NICTRD) organised the National Competition of Final Year Projects in Islamabad. The event was organized under National ICT Grassroots Research Initiative (NIGRI) which aims to promote, enable, and encourage R&D culture at the grassroots level by funding relatively high caliber R&D projects. I have had the opportunity to attend the event.

Ever since the launch of NGIRI in 2011, 72 public and private sector participating universities submitted 5,538 Final Year Project proposals out of which 2,067 FYPs received an overall grant of worth PKR 130 million.

NICTRD has been funding university students for their projects and research for a long time. But, this was the first time that individuals and teams behind these funded projects were invited to Islamabad to display their innovations.

As I entered the venue and went through the details of displayed projects one by one, I was totally fascinated to find out the the diversity of projects, young innovators and their energy that had taken over the room. At such technological events generally, students from big cities of the country have active participation. However, the situation was totally different here. At one side, students from University of Jamshoro were setting up their product demos while on the other side, students from Baluchistan University of Information Technology were excitedly prepping their pitch. An all girls team from Fatima Jinnah University was demonstrating project on publishing system to the visitors, whereas on the other booth, students from University of Haripur were expounding on their Android Application. Such was the level of diversity in that hall.

One of the most significant persons who made this competition possible, Yusuf Hussain, the CEO of NICTRD fund, was also present at the event. I could see him going to all the projects booths, giving personalized feedback to the students. He told one team, “Pitching is an art. Choreograph your pitch. Decide how you will present, who will speak, who will manage the demo.” Few minutes later, when he officially opened the competition, he stressed,

“You (students) are the real chief guests of the event. We are here to help you, serve you in every way possible. We want to cultivate a culture of fun, learning and innovation, so that we see commercially viable innovative ideas coming from Pakistan.”

Out of 32 projects displayed from all over the country, 3 projects were announced as winners by the Judges. The criteria was based on ‘progress, innovation and commercialization’. It was not only the students who were awarded for winning the competition but their respective project supervisors were also duly acknowledged and awarded.

The following three projects were rated the highest by Judges:

NICTRD to be renamed as Ignite

Yusuf Hussain also made it official that National ICT R&D would be renamed as Ignite. He added that the new name Ignite was a true representation of their organization’s vision and mission. Ignite would help bring a technology and innovation wave in the country and help startup founders build and commercialize their projects within the country and beyond.

He also added that with the new name, the scope of work of NICTRD would expand as well. In addition to funds, ICT R&D would also provide mentorship and training to the aspiring entrepreneurs and innovators.

TechJuice recently wrote about a startup DealSmash which has secured non-equity financing from NICTRD. Moving forward, many more startups with innovative ideas will also be able to apply for the fund of NICTRD. As the grant opportunities are now open for startups in addition to students doing their research and university projects.

“We are becoming venture capital fund, we will still give grants but we will bring mentorship,” said Yusuf Hussain, while speaking with the participants. He added, “We will fill holes in the ecosystem by our digital skills training program, incubators etc. Ignite team is very excited and working on the aggressive targets set by the Minister.”

A fund of PKR 400M has been set aside for the purpose. A grant application form is available on the official website which can be filled and submitted online. Each and every application is evaluated by internal and external reviewers of NICTR&D and the whole process takes 2 to 3 months approximately.

While addressing the closing ceremony of the event, Minister of State for Information Technology, Anusha Rehman had a very personalized, frank and non-political discussion with the winners and participants.

Anusha Rehman reaffirmed the commitment of Government to foster the culture of innovation through information and communication technology in the country. She reiterated Government’s mission to connect the unconnected population with Internet. In this regard, she asserted that the launch of 3G/4G technology had been a real game changer.

She mentioned that the recent MoU with the e-commerce giant of China Alibaba had been a testimony to the Government’s resolve for promoting e-commerce and innovation in the country. She further announced that Alipay would soon be launching in Pakistan.

Alipay is a venture of Alibaba for online payments. The country currently lacks a robust and reliable online payment solution. The launch of Alipay is going to be a significant breakthrough in ecommerce industry of Pakistan. It is surely expected to elevate transaction influx and trigger immense amount of growth in the ecommerce industry of Pakistan.

In addition to this announcement, Minister of Technology also promised to train 1 million freelancers in the next two years.

On the whole, witnessing the event first-hand had been an exciting experience for me. It was heartening to see that culture of innovation and enterprise is flourishing in the country. Most importantly, Government’s will to take a lead role is a highly encouraging and positive. Competitions of such nature are indeed a step in the right direction. 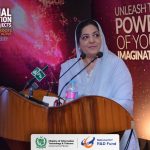 These projects were displayed at National Competition of Final Year Projects