Pakistan and China have officially signed a grant agreement worth $100 million for the purpose of repairing National Highway-5.

According to a report by Business Recorder, the terms of the agreement state that China will provide grant assistance of 659.8 million yuan (approx. $100 million) for the rehabilitation and repairment of 66 kilometers of N-5 between the Hala (Matiari district) and Moro (Nausharo Feroze district) regions of Sindh.

The grant agreement signing ceremony was held at Economic Affairs Division in Islamabad on Thursday.

The project will help to improve road infrastructure and augment North-South connectivity. Minister for Economic Affairs Makhdoom Khusro Bakhtiar and Chinese Ambassador to Pakistan Nong Rong were also present on the occasion.

The Minister lauded grant assistance extended by China for various infrastructure and socio-economic projects in Pakistan.

Speaking on the occasion, Makhdoom Khusro Bakhtiar said this project will increase connectivity between North and South. He thanked China for supporting Pakistan for the completion of the NH-5 project, fighting against COVID-19, and curbing the locust.

The Chinese Ambassador in his remarks said that cooperation in socio-economic development with Pakistan will continue.

Earlier, the Chinese envoy called on National Assembly Speaker Asad Qaiser and informed about the advent of the second phase of the China-Pakistan Economic Corridor (CPEC). H explained that socio-economic, industrialization, agriculture and scientific and technological sectors would be the main areas of focus. 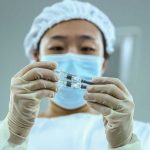