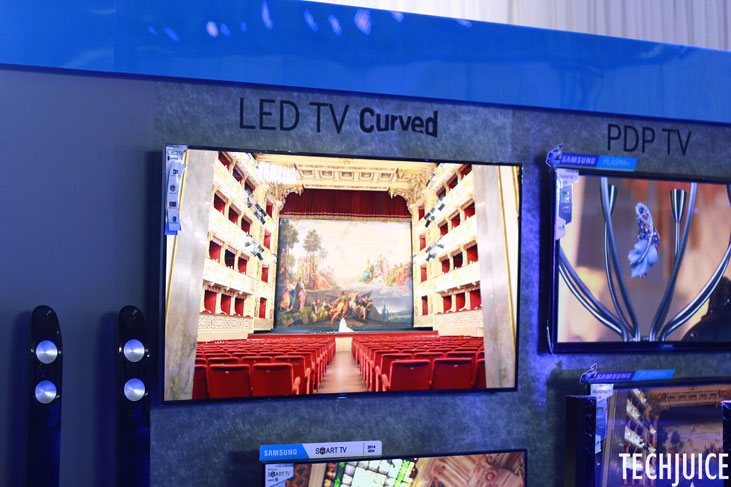 Samsung Electronics held an event on 7th June at Expo Center Lahore to launch its latest Curved Ultra High Definition (UHD) television series in Pakistan. The new Curved UHD series was revealed to the media and public in a press conference. It is to be noted that this piece of technology is being launched in Pakistan at almost the same time as its global launch.

The Managing Director of Samsung Pakistan, John Park was present at the launch along with Samsung Pakistan Channel Manager (Yasir), CEO MRM (Musa) and CEO Smart Home (Shakir). The event was co-hosted by Ahmed Ali Butt and Muzna Ebrahim, who kept the audience alive with their energy and great sense of humor. 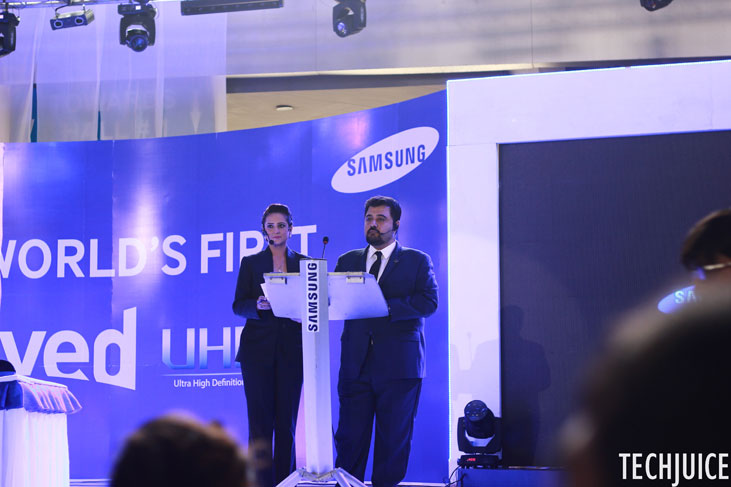 What is UHD anyway?

You might be wondering what good is a ultra high definition TV when there’s not much UHD or even HD content and channels out there, think again. Samsung’s innovative (4-step up-scaling) technology converts lower resolution contents into UHD picture quality enhancing the details of video images. Plus, the Samsung UHD TVs can be made future ready by a simple addition of an ‘Evolution Kit’. This will let people update their TV to match future UHD standards without having to buy a new TV.

Samsung UHD TV display’s the world’s true colors through “PurColor”, crystal clear images with optimized contrasts, that fits perfectly with UHD picture quality. That means you’ll get the brightest yellow, the purest reds and all the colors would be as close to nature as possible. Additionally, the electronics giant’s “UHD dimming” precisely adjusts the brightness levels to create deeper black and purer whites. 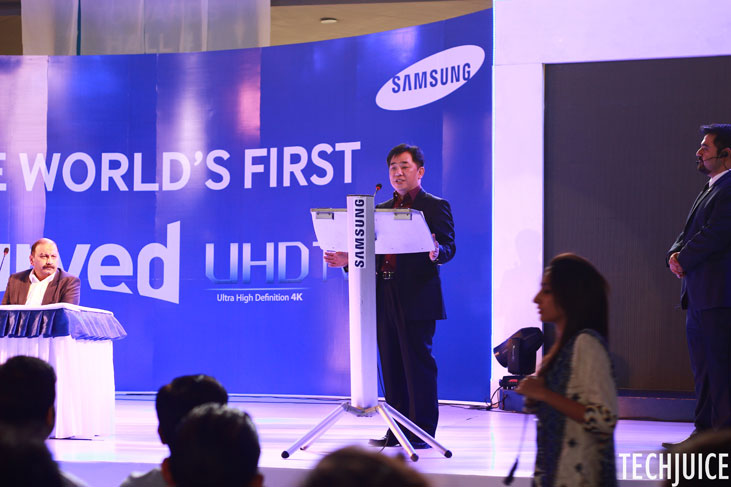 How is a Curved Screen Better?

The host, Ahmed Butt joked that he is a fan of curves and embraces his own (curves) proudly. On a more serious note, a TV expert Usman, brilliantly explained in technical terms how a curved screen is superior to the flat-screen and the more older inversely-curved screen. We bring you all that insightful facts in relatively simpler words.

When compared to traditional flat-screen TVs, Samsung’s new Curved TV allows for more realistic viewing experience, even from different angles. Thus ensuring that every seat and couch spot becomes the best seat in the house. Moreover, the curved screen brings the edges closer to you, creating a wider field of vision, which means the screen appears to be even bigger than it is. Since the curve surrounds you, it gives a great immersive viewing experience and you become the part of the action.

The combination of a concavely curved screen and Samsung’s Auto Depth Enhancer UHD technology automatically adjusts contrast for a greater sense of depth and “gives a 3D-like effect without requiring any glasses,” said John Park, MD Samsung Pakistan. The curved screen can take viewers a step closer to experiencing life-life-images.

We’re currently living in the start of a smart technology era and Samsung realizes that perfectly. The new Curved UHD TV along with most of the other TVs from Samsung’s 2014 range come with multiple smart features. The features aim to provide greater viewer experience and include things like:

The Curved UHDTV is available in the following sizes: 55”, 65” and 78”. Samsung also offers Curved screen TVs in its SmartTV range in 55, 65 and 75 inch sizes. For more details visit http://www.samsung.com/pk

You might know Samsung for its smartphones and TVs but the company’s product profile is much more diverse.
“Samsung has been a global leader in home appliances for 8 consecutive years.”
It continues to invent and innovate in the areas of telecom, audio and video, LED lights, home appliances as well as health and medical equipment. Speaking of which, it’s seems right here to mention Samsung’s CSR and it’s donation of 3 color ultrasound machines to Jinnah Hospital in Karachi (which provides free healthcare to the poor).

Samsung seems to be the pioneer of curved TVs. Do you think other tech companies would follow the trend? Do you think that UHD and Smart Features are essential to keep up with the Smart Era? 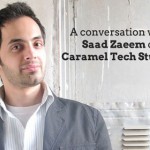 A Conversation with the CEO of Caramel Tech, Saad Zaeem