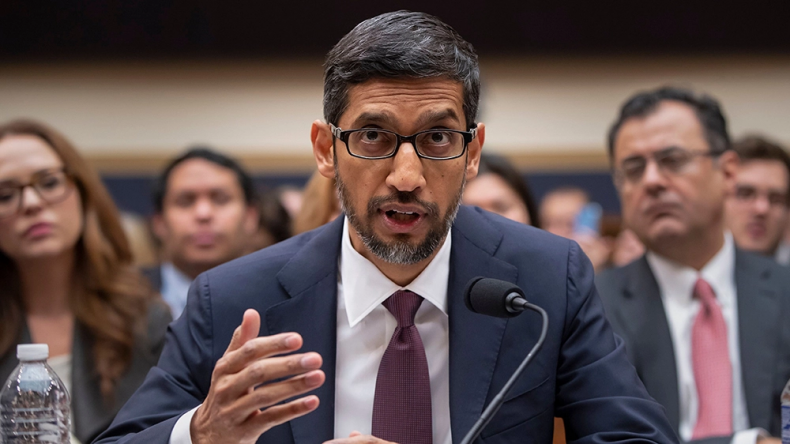 Today CEO of Google, Sundar Pichai, appeared in front of the US Congress to answer some questions. While many were legit concerning questions, there were a few showed up that was hilarious and showed the many US congressmen lack understanding about how the tech world works. During the session, Rep. Steve King asked Pichai to explain how iPhone was showing notifications to his 7-year-old granddaughter.

“I have a seven-year-old granddaughter who picked up her phone during the election, and she’s playing a little game, the kind of game a kid would play,” King told Pichai. “And up on there pops a picture of her grandfather. And I’m not going to say into the record what kind of language was used around that picture of her grandfather, but I’d ask you: how does that show up on a 7-year-old’s iPhone, who’s playing a kid’s game?”

Pichai looked confused at the question as they had nothing to do with iPhone’s notification system. “Congressman, the iPhone is made by a different company. And so, you know, I mean…”

But Rep.King thought he was onto something and said that brand/manufacturer was not important. “It might have been an Android. It’s just, it was a hand-me-down of some kind,”

The question was vague before but it also got more confusing and Pichai had no clue how to respond to the question but offered a followup, “You know, I’m happy to follow up when I understand the specifics. There may be an application which was being used which had a notification. But I’m happy to understand it better and clarify it for you.”

It is unclear what King was talking about, was it a Google service? Was is it random notification on his granddaughter’s iPhone? It seems as if the notification had a photo with some not so appropriate text around it. But the hearing shows lack of understanding of technology on US congress’s part and begs the question, how can they regulate and reform it when they don’t even understand the basics of it.

previous
“I have no respect for SEC”, says Elon Musk while holding back his tears
random
next
OnePlus launches OnePlus 6T McLaren edition with a subtle touch of McLaren
Trending Posts