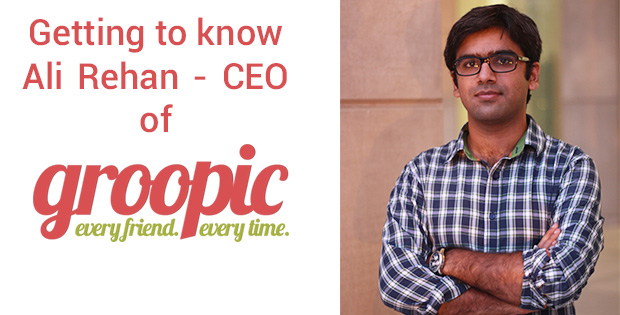 If you’ve been active on social media recently, you might have heard a lot about an app called ‘Groopic’. Groopic is the maiden product by a Pakistani startup, Eyedeus Labs. This revolutionary app solves the age-old problem of having the photographer left out of any group shot. All what you have to do is take two pictures – each with a different photographer – and Groopic magically merges the two photos to produce a single picture of the whole group.

Eyedeus Labs released this application for iOS on 10th July and have been receiving rave reviews from some of leading tech blogs of the world like TechCrunch, Gizmodo, Cult of Mac and PetaPixel. Team Eyedeus were also shortlisted for this year’s Google Blackbox Connect entrepreneurship accelerator and are currently in Silicon Valley to attend it.

Two weeks ago I approached Ali Rehan, the CEO of Eyedeus Labs, for a small Interview. He was kind enough to take out time for me,  despite a very busy schedule with the worldwide application release, in process. Last week, we met at LUMS for a chat.

The word CEO usually brings to mind a very bossy and strict person. Ali Rehan is nothing like that. The moment I met him, I was amazed at how comfortable he can make the next person feel. You can chat over coffee instead of having to dress up in a suit or tie and not feel out of place. The mark of a true intellectual, he takes a deep interest in what you have to say and is always open to suggestions and ideas. Casually dressed, you wouldn’t take him for the leader of a company at first sight, but all that changes when you get into a discussion with him.

Greying hair, thick-rimmed glasses, piercing eyes and a friendly smile give him the air of a true tech entrepreneur – someone to watch in the years to come.

The interview lasted for two hours. Here is the gist of what was discussed:

TechJuice: How you came up with the idea of “Groopic”?

Ali: Well, we don’t have any typical tragic tale to tell like, ‘One of our poor friend was always left behind while taking group photos,’ or something.

Actually, during our 4-5 years of research at LUMS Computer Vision Lab, we did some advanced research work in our domain and were driven by the notion of releasing a well-executed product. As a result, we came up with this idea.

I still remember the Startup Weekend organized by LUMS. I discussed with my group mates and stressed that we should participate. A night before the competition, after brainstorming and discussing, we came up with the idea of Groopic, and then, over the weekend we worked on the idea, developed the application and, fortunately, won the competition, too.

TechJuice: You have previously worked at ChOpaal.pk (smsall.pk)? Did the worldwide appreciation of that project give you confidence that you will be successful?

Ali:  Maybe, but the fact is I was not involved in ChOpaal.pk for too long; I worked for it during my first year at LUMS. Prior to that, I had only a little experience with CS. I went to Dr. Umar Saif and worked by his side for a year before moving on to several other projects. Dr. Umar Saif, co-founder of the product, supported my endeavours and I learned a lot under his wing.

TechJuice: Had you always wanted to be an Entrepreneur?

Ali: Not really. I never quite thought about being a leader in a startup or getting into entrepreneurship. Initially, when I came to LUMS, I was quite confused about what I would do with my life. I took one CS course at sophomore level and performed well in it. It was then that I realized that CS was the right path for me.

TechJuice: You call yourself a geek, and geeks usually come across as introverts – What’s your take on that?

Ali: Yes! I am a Geek and an Introvert. I am not very open to everyone, I have my own social circle with whom I hangout most of the time.

TechJuice: Startup Founders have very tough life. How many hours do you sleep everyday?

Ali: Well I do sleep 🙂 *Giggle* I work and sleep on a regular schedule.

*off the record conversation* Ali told me, for some days he is so much caught up in his work that he prefers to sleep in office, so as to continue his work in a few hours again.

TechJuice: How has the startup impacted your family, social life, or relationships? How have you changed as a result?

Ali: My family is quite supportive now, but initially they were worried about me because I was working too hard and was way too engrossed in my work. Later they realized that it was my passion and  accepted me for who I am.

My fiancée does get a bit irritated at times, but now she, too, has adjusted to it. So I haven’t changed myself much, really; it’s just the support of my loved ones that’s help me get through this all.

TechJuice: Had you worked on any product before Groopic? How did that work out?

Ali: We worked on a few products but they couldn’t see the light of the day because of some inevitable reasons. However, most of the products I worked on performed well, they were never really a failure.

TechJuice: With whom, you first discussed the idea of Groopic and how was the feedback?

Ali: I never really discussed it with anyone; we developed the product right away, got an offer from an angel investor which we rejected and decided to work on our own.

TechJuice: What was the least interested reaction when you discussed this with your family/friends/network?

Ali: Mmm… I never got any bad reaction from anyone really. Never received any comments like faarig, etc, when the product was brought up. In fact, a lot of people acknowledged us being a great team and sometimes we were suggested to work on something better.

Most of the feedback from people has been really exciting and encouraging!

TechJuice: The team is very important in startup? How did you guys meet and how have you stayed together in crucial times?

Ali: I am very lucky to have the best team working with me. One of my team mates is my younger brother, one is my course mate, and the others have been my tutors in different courses at LUMS.

So, we knew each other before “Groopic”. Moreover, the distribution of roles is very well-balanced. Each and every one of us is doing what they do best.

We never really faced any crucial times or tough situations, but, yes, we do have disagreements sometimes and they are resolved in open discussions. Even if the majority agrees on something, we always hear the opposition out and debate the matter right there and then. Thankfully, that’s rarely the case as we all have quite a great mutual understanding.

TechJuice: Amir and Murtaza are also  working in LUMS  – Do they plan to leave LUMS and join the startup full time?

Ali: The research they are carrying out at LUMS is the backbone of our company. We were unlikely to survive had it not been for that. So, their association with LUMS is very important to us.

TechJuice: When are you releasing Groopic for other Mobile Platforms?

Ali: The Android version of the application is ready but there are a few issues with it. It’ll be released as soon as we’re done resolving them. We’re not going to be targeting Windows Phone because of its relatively small user base.

*I inquired if the app for Android would be free. Ali was of the opinion Groopic is a great utility application and people would be more than happy to pay for it.*

TechJuice: Now we are seeing smart Cameras based on Smartphone OS like Samsung Galaxy Camera? Wouldn’t it be awesome if the App is compatible for these devices too?

Ali: Yes, why not! Currently, however, we are focusing on our iOS and Android apps. If our Android app is compatible with Android based camera then it would be great. Otherwise, we will have to consider the pros and cons involved in taking that decision.

TechJuice: Is Groopic open for acquisition?

Ali: Yes, but it depends upon the figures. You see, we have other product ideas as well; if our product is acquired we can execute the other ones.

TechJuice: What is the role of LUMS in your startup?

Ali: LUMS has played a vital role for us. LUMS has given us all the opportunities we needed and the freedom to do as we liked. You never get that kind of freedom and opportunities anywhere else. There are people in the world who take this liberty positively and utilize it and there are others, who fool around and waste their time. I am pleased with the fact I am the former.

TechJuice: How important is it to join startup accelerators and incubators ?

Ali: Very Important! I disagree with people who think that ideas are hijacked by incubators or startup accelerators. A person can steal your idea but not your mind. Everything depends upon the execution of the idea and how you progress with it. I have learned a lot from Plan9 and it has played a very significant role in our startup development. I owe a lot to all the mentors, instructors and all the others over there.

I highly recommend joining a startup incubator to all those who are determined and want to work in an environment, where they will get a lot of help and training. I’ve felt a clear difference when comparing myself before and after Plan9.

TechJuice: Who is your inspiration/idol ?

Ali: There is no specific person; I believe everybody has some positives and negatives. Nobody’s perfect. There are certain things I admire in Steve Jobs and certain I don’t Likewise, there are other people whom I admire. I don’t think in black and white – there are always some grey areas in between and we need to focus on them, too.

TechJuice: What will be your message to all the budding entrepreneurs out there ?

Ali: Work and Focus! Your first priority should be the development of your product, everything else is secondary. 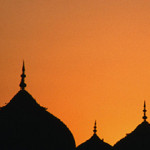