China is all set to enter the race of putting autonomous vehicles on the roads. The country has been working to bring the Robo-taxis on the ride-hailing platforms. It might take years for human intervention-less cars to become ‘normal’ as there are so many safety and mechanical hurdles that need to be met.

Since China is challenging US technologies’ dominance, Chinese companies like Baidu and Alibaba’s AutoX and ride-hailing platform DiDi Chuxing newly launched a driverless taxi pilot initiative in multiple cities around the country.

Meng Xing, the Chief Operating Officer of DiDi autonomous Vehicle Company, said in an interview that it’s Artificial Intelligence system is already smart enough to handle most of the situation, and the drivers never had to touch the brakes or steering wheel.

According to DiDi’s CEO, autonomous taxis will be on the roads by the end of this year. Similarly, the USA is also working hard on the driverless taxi project, but the US-based autonomous players shared not much of the details.

Da Xuan, a social media worker, joined the test ride of driverless taxi and said: “I heard companies like Uber and Tesla were doing autonomous driving, so I was curious what Chinese companies were doing, whether they can go into production, and if so, what will the riding experience be like.” 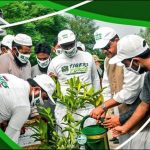 The Government launched a surveillance app for ongoing plantation drive.