The Selfie Dilemma: To Take it or Not 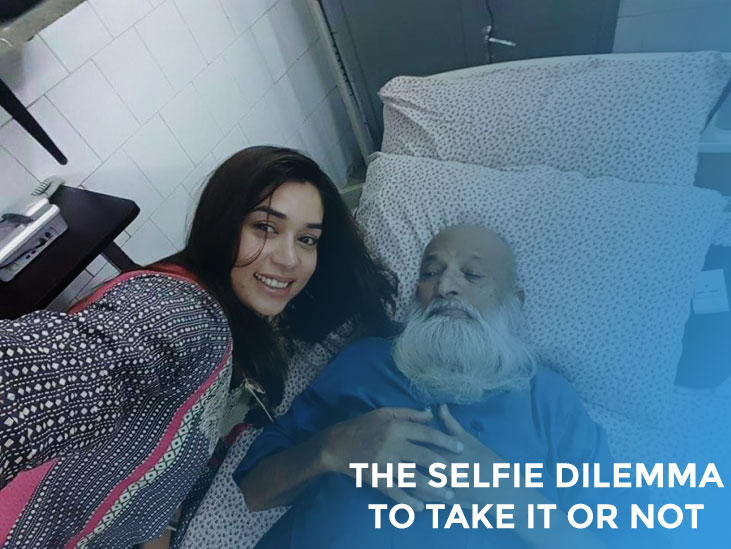 Another day, another controversy spiraling in the social media circles of the country – and this time, the center of it all is a selfie taken by a Pakistani singer, Komal Rizvi, with the renowned philanthropist Abdul Sattar Edhi.

According to the available details on the matter, actor/singer Komal Rizvi paid a visit to Mr. Edhi, who has been unwell for the past few months now and is currently being treated reportedly because of kidney failure, this Sunday evening. One of the “highlights” of her visit to the Edhi Centre was a selfie she took with a seemingly dejected Mr. Edhi lying on his sickbed. She posted the said picture on her Facebook account for her 653,000+ followers, and a barrage of criticism soon followed, with some terming it the ‘worst selfie ever’.

A vocal majority of internet users has since taken Miss Rizvi to task on multiple online platforms including Facebook and Twitter. Many have decried the act, terming it tactless, in bad taste, and in some instances a “cheap publicity stunt”. Some have even demanded for her to be slapped with a fine, while others were quick to create memes out of the occurrence, superimposing a jubilant Komal Rizvi with otherwise gloomy events and pictures in the backdrop.

You don’t take selfies with someone who is in critical condition .. with a wide grin on your face ! BTW I don’t even know who Komal Rizvi is

Some loyalists tried to defend her actions as well, asking the singer’s detractors to stop judging others and to lead with example.

If Edhi doesn’t have a problem, why are you guys getting so hyped up? #KomalRizvi

Shame on all u judgmental creeps I hope u are happy now that u made a mockery out of Komal Rizvi that too in Ramzan pic.twitter.com/I0JmlrfX4d

Miss Komal, fully aware of the unfolding events, soon followed-up with a 700-word post, explaining that taking the pictures and uploading them on Facebook was actually the idea of Mr. Edhi’s grandchildren, and not entirely hers. She also lambasted her critics, calling their actions “nasty, negative, lazy, and hypocritical”. Her message for such people was to “have some damn respect,” and to retract, and delete their comments.

Regardless of the intentions behind her visit and the episode that followed, one thing that is very clear in the hindsight is that being the netizens of 21st century demands prudence, especially for the people who have hundreds of thousands of followers on the social media. I, for one, believe that a little circumspection on Miss Komal’s part could have gone a long way to save her from such backlash.

Notwithstanding the fact that we live in a world where “pics or it didn’t happen” has become a norm on social media, the time and place still matter, and above all, perhaps, the morality of the situation. This is not the first time, however, for a tasteless act like this to have drawn so much online attention and hate. As some might recall, a Saudi boy was severely censured for allegedly taking a selfie with his grandfather’s dead-body earlier this year, and the even went on to involve authorities which promised enraged citizens of the nation a swift investigation into the matter.

Even the people in position of authority are prone to fall for such things, case in point being US president Barack Obama’s selfie at Nelson Mandela’s memorial service, for which he faced a lot of criticism, in 2013. 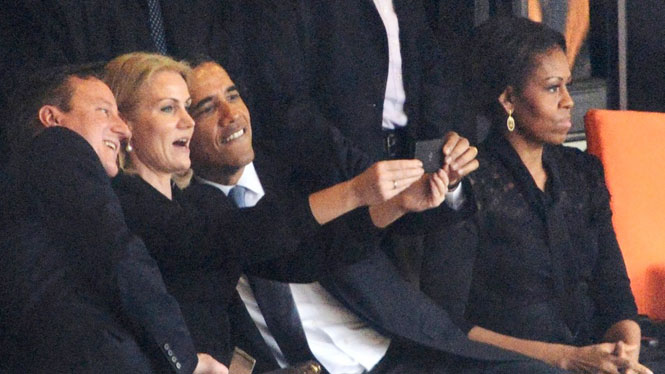 And perhaps in the most tragic incidents of all, in Faisalabad, Pakistan, a teenage schoolboy who was reportedly taking selfies with a toy gun was shot by police just a couple of weeks ago. He eventually lost the battle of life in local hospital due to excessive bleeding.

All these incidents go on to reaffirm the notion that, in this day and age, we should try to practice utmost discretion in all situations involving the use of technology, especially in cases where the audience can simply be anybody on the internet. Incidents like the one that involved Komal Rizvi’s selfie can happen to anyone, and can easily polarize the online populace but ultimately, the harm done can far outweigh the apparent gains on the outset.

Our obsession with selfies is, without question, getting a bit out of hand, but a little consideration for everyone involved—right from the individuals facing the camera to the audience which will eventually dissect the situation for their own gains—and taking some time for a brief thought-process before whipping out one’s cellphone to take that tempting photo can save you from finding yourself on the receiving end of online vitriol.

Some photoshopped selfies of Komal Rizvi taken from Social Media. 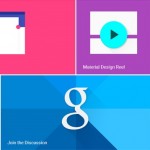