Evamp & Saanga, a Pakistani software house has designed a live trivia game show app. The app, called Muqabla went live on the Google Play Store last week. It is a free-to-play game and is rated 3+, meaning anybody can play.

A friend of mine shared the app with me this morning and I have been buzzing about it ever since. I downloaded the app straight away and then proceeded to register on it. Here is how I signed up:

Be careful, you can only set your username once, i.e. you can’t change it later on.

The game show conducts a live trivia every day at a given time. The trivia’s host asks contestants 11 questions along with 3 choices for each question. A time frame of 10 seconds is given to the contestant, after which his/her answer will not be accepted, resulting in elimination. The contestant will be eliminated if the answer is incorrect as well. 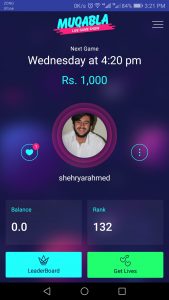 The best part about the game is the payout system. The minimum cashout amount is Rs. 1,000. Once you attain the limit, you can transfer the amount to your EasyPaisa account. That’s it. No complications or formalities.

While this is a nice initiative, I’m interested to see the public’s response to it. Such an app initiative has not been trialed in the country before and the nearest alternatives are the game shows being conducted on television programs. Sadly though, admit passes to these programs are limited and thereby mass participation is limited to a significant extent; Evamp & Saanga has tackled this issue through Muqabla.

Here’s how startups can use WhatsApp for marketing