TechJuice > Cryptocurrency > What is Ether?

In the previous article, we talked about what is Ethereum and how it helps in decentralizing the internet away from the prevalent client-server architecture that is in place these days. In the center of that whole process lies Ether, the fuel that powers up the whole system.

Although Ethereum blockchain isn’t owned by any single person or organization, it isn’t free to use for everyone. The Ethereum network needs some form of a payment to purchase the computational resources needed to run an application. This payment is done via Ether, a small piece of code which, just like Bitcoin, is a digital bearer asset and tracks ownership and transactions done against it.

Although Ether and Bitcoin both make use of the blockchain technology, their applications are very different. While Bitcoin exists solely as a replacement for currency, Ether is meant as fuel to run the whole Ethereum network. Each application (even a simple smart contract which monitors shares of a company) needs some computational resources to run on the Ethereum network. Similar to how a car needs fuel to run, a certain amount of Ether will be required to run that application on the Ethereum network. Due to this similarity with fuel, Ether is sometimes called as ‘digital oil’. Taking this analogy further, the amount of Ether required to run an application is measured in how much ‘gas’ it requires.

Can you mine Ether?

Ether, similar to Bitcoin, can be earned through mining. Miners process the contracts and other applications that are running on the network and make sure that the network remains secure. To reward the computational resources that they spend during this process, they are awarded in Ether. every 12 seconds, on average, a new block is added to the blockchain with the latest transactions processed by the network and the computer that generated this block will be awarded 5 Ether.

Unlike Bitcoin, there is no limit to how many Ether can be ultimately mined. There is, though, a maximum cap of 12 million Ether which can be generated in a single year.

Relationship between ‘Gas price’ and Ether

For a number of reasons, mostly related to volatile nature of cryptocurrency, variable performance of individual machines and complexity of programs, the cost of running a transaction (it might be a block of a simple contract or any other complex application) is not directly calculated in Ether. The total computational power that was spent in running the block on the computer of a miner is calculated in gas amount, which is then multiplied by the gas price and the resulting amount is paid in Ether. 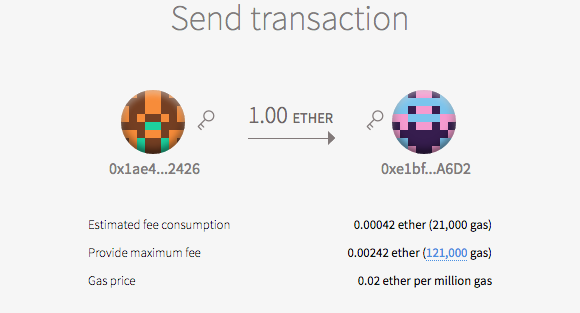 It might seem a little complex right now, so let’s try to understand that via a simple example. Suppose that there is a user who wants to run a transaction which will cost 500 gas to run. So what he does is go on the Ethereum network, and post his transaction along with a gas price he is willing to pay. Consider that he posts a gas price of 0.1 ether per gas. Now along with the transaction, he will have to pay 50 Ether to get the transaction on the network. Any miner who is willing to accept transactions in that gas price range will accept the block and run it on their computer.

Although it might seem unfair to the user to charge him regardless of whether his transaction gets completed or not, it is only fair that the miner gets his computational cost covered. There is no way for a miner to reverse the resources spent after a transaction has been processed.