What is the Best Android Launcher App for You? 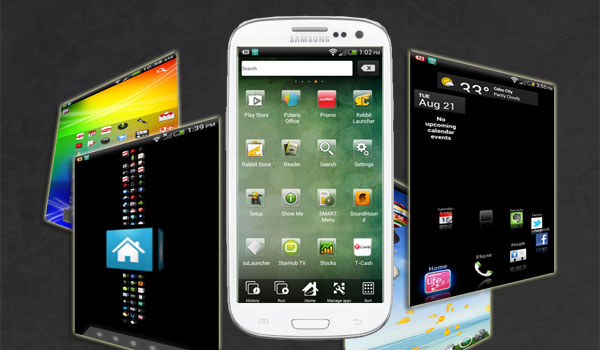 Take any random number of Android users and ask them one question: ‘What do you like the most about the OS?’ The most redundant answer, we’re sure, will be the ability to customize it according to the user’s choice and taste. Android Launchers, the apps that act as an app drawer and Homescreen of the device, are one of these many customizable aspects of Android.

Surely, the power over each and every pixel of your precious mobile device sounds appealing, but it comes at the expense of confusion. There are so many options available out there that trying out all of them, let alone settling on a single one, seems a daunting task. You, however, do not have to worry about it because we have tested all the best Android Launchers available at the Play Store and here are our top picks with their major features to let you decide the best option for your device in a single sitting.

So scroll away, and find out for yourself the best Android launcher for your Android device: 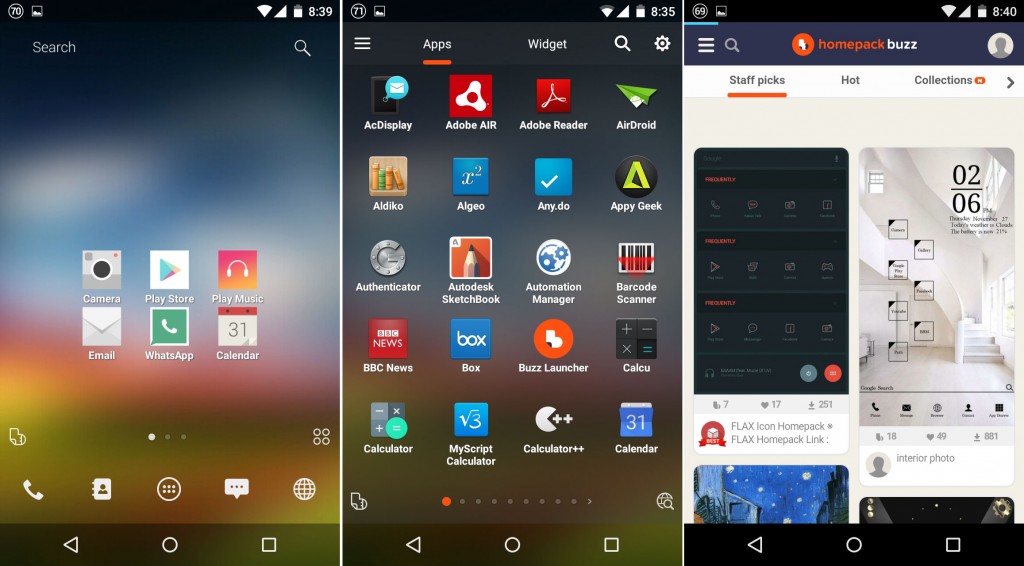 Buzz Launcher is one of the most capable Android launchers you can possibly choose from. Thanks to its crazy amount of customizability options, personalization of icons, wallpapers, and widgets, choice of themes, gestures, and super-fluid performance, this is definitely our recommendation if you want to choose the best Launcher without paying a dime.

Buzz Launcher is free, ad-free, and compatible with Android ICS v4.0.3 and up. 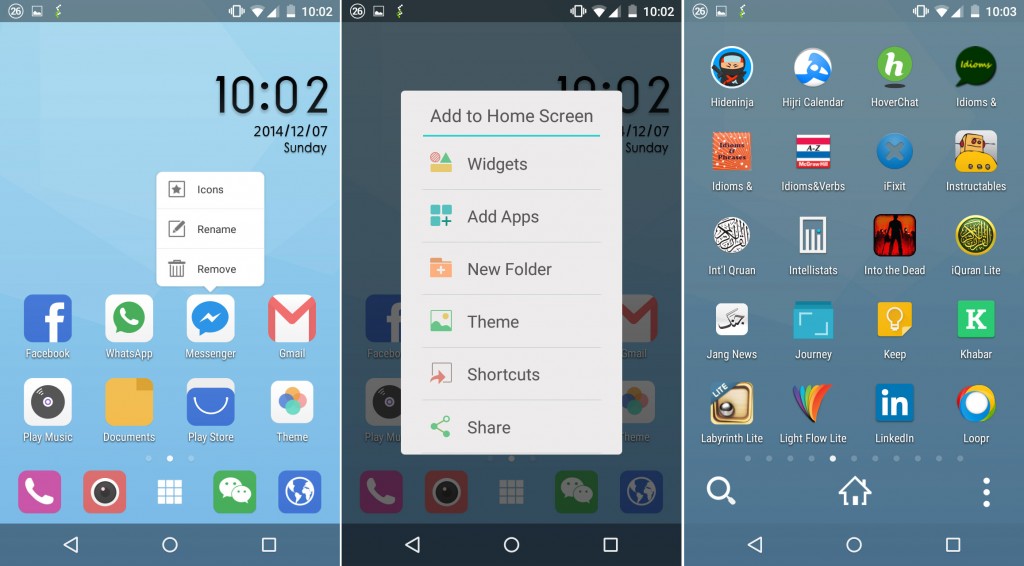 Cheetah Launcher is a simple option for your launcher app needs. It promises 50% less RAM consumption as compared to other alternatives thanks to its better resource management and simplicity of operation.

Cheetah Launcher is simpler than other highly-customizable launchers available in the Play Store but also offers some basic personalization options like changing names and icons of apps on the Homescreen, interaction gestures, and more control over apps shown in the App drawer. Several free themes are also available with the app for the user to choose from. 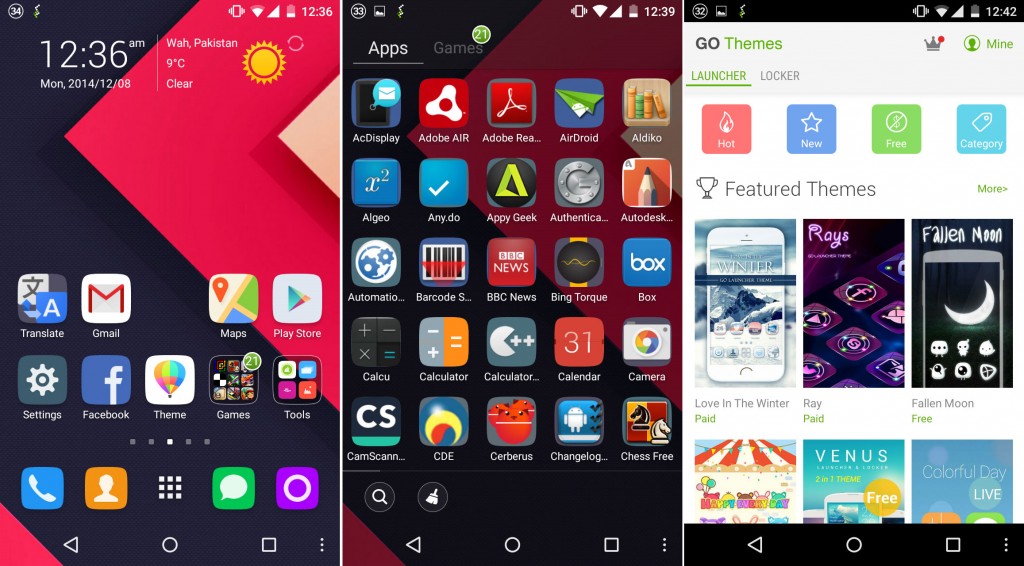 GO Launcher is a pretty powerful and customizable option. Although it has a paid version, the free one also has quite a few tricks up its sleeve.

A large number of themes, transaction effects, widgets, and gestures are available for free which can be further increased using the paid upgrade. A couple of things, however, that go against this launcher are that it uses more resources as compared to other launchers, and that you’ll have to rely on a number of additional installs apart from the launcher itself to make the most out of it. 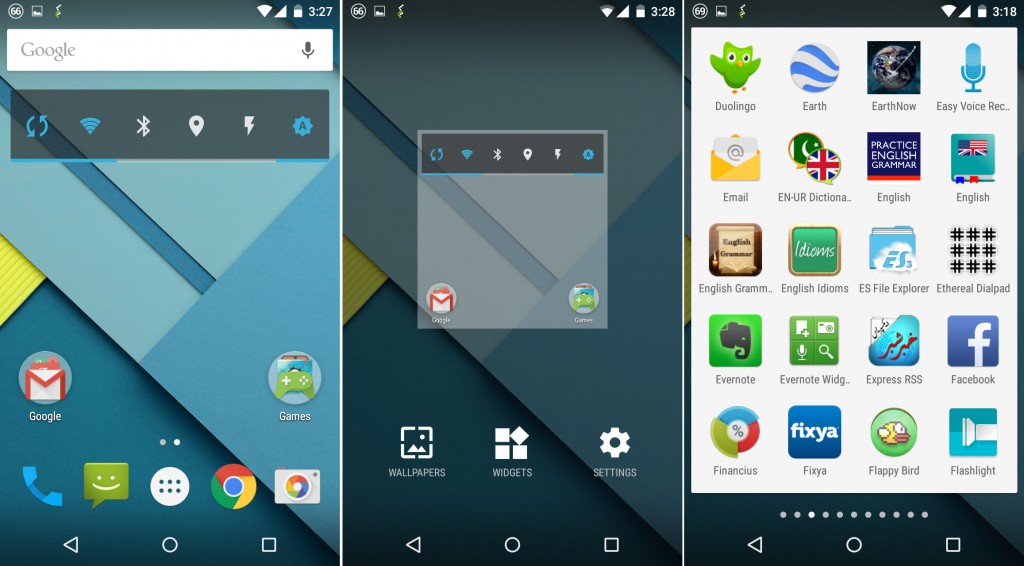 Google Nexus devices are known for their clean and minimal user interface that is both fast and fluid. While they lack any bells and whistles that are added by other manufacturers while creating a custom experience for their devices, a lot of people still prefer an unadulterated UI that doesn’t get in the way of their tasks and does its job without announcing its presence.

Google Now, as its very name suggests, makes use of Google’s eponymous card-based virtual assistant, which can be accessed by a single right-swipe at the main Homescreen. Other Homescreens, of which a user can add virtually countless, reside on the right side of the primary one.

Google Now is free, ad-free, and runs on devices with Android v4.1 Jelly Bean or later. 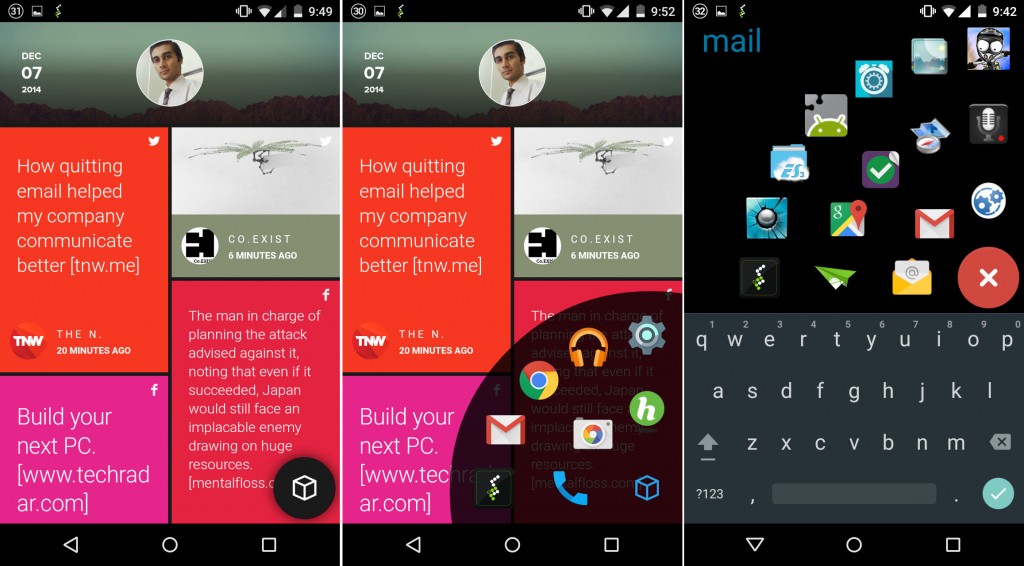 Flow Home is a special present for the social media buffs in our midst. There is only a single Homescreen for this launcher which shows the social media feeds of the user once they are connected to the app. Flow Home can show the feeds from Facebook, Twitter, Instagram, and Tumblr. Icing on the cake: it can show both text and image posts on the Homescreen. Your latest notifications like e-mail also show right up on your Homescreen to give you a larger preview and let you decide whether you want to open the dedicated app or not.

Rest of your apps are accessible via a swipe to the left. You can also search the apps to find the one you are looking for, and add a few shortcuts to the quick-access icon on the Homescreen itself by long-pressing on an app.

Flow Home, though it is still in beta, is both free and ad-free. It is compatible with devices running Android v4.0.3 and up. 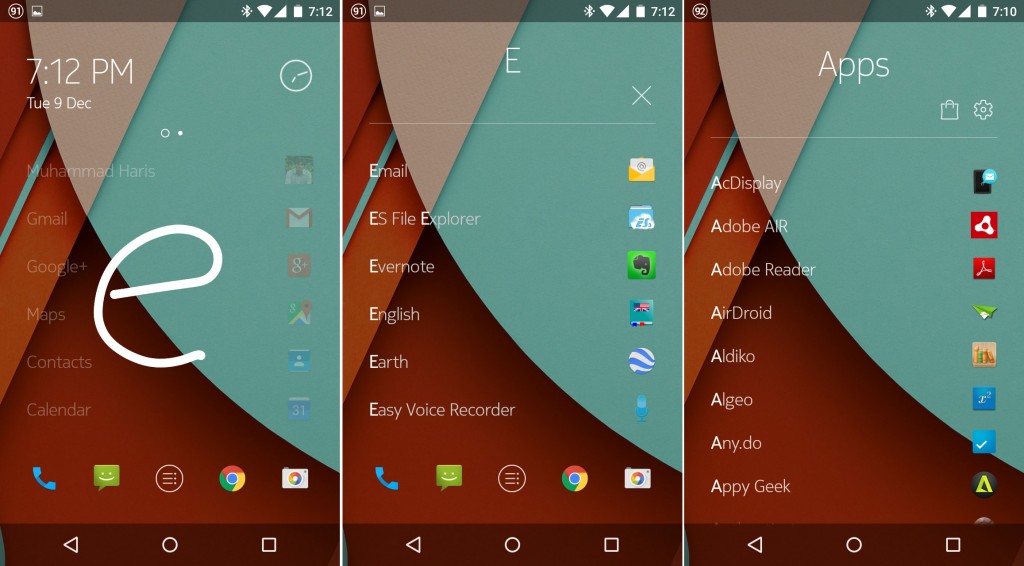 Nokia’s foray into tablets and mobile apps has resulted into some interesting products. Nokia Z is the company’s home-baked launcher app for Android and it is quite a decent offering. Nokia Z learns all day from the pattern of your apps usage, and shows the most relevant apps and options with the changing time. A user can also scribble a couple of letters on the screen to quickly search through the apps.

Nokia Z is also completely free, both from costs and advertisements, and runs on devices with Android v4.1 Jelly Bean and up. 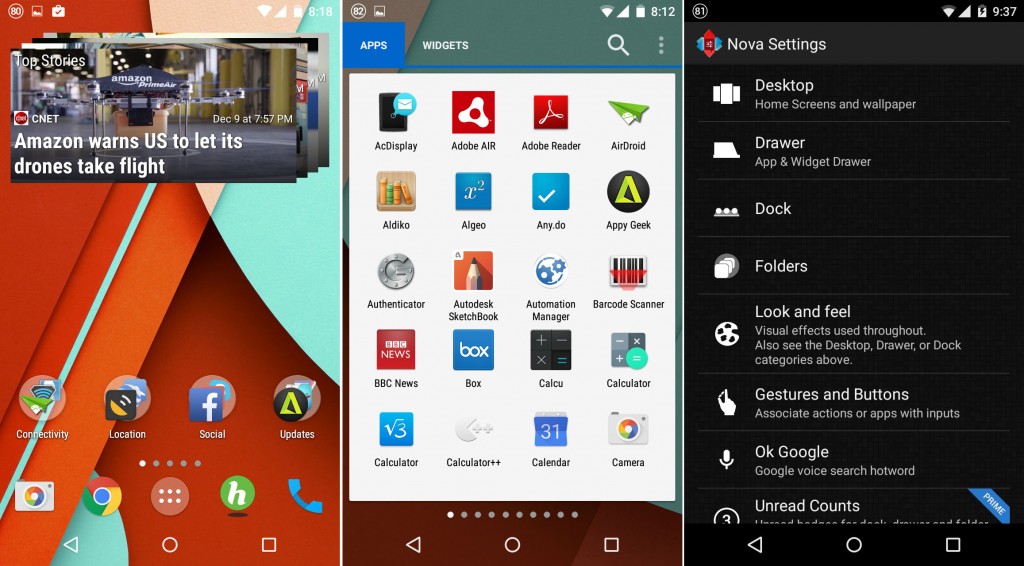 Nova Launcher is arguably one of the best launcher apps available right now for Android. Its free version, fortunately, doesn’t pester the user again and again like GO does, and the Prime version is great value for money.

Nova Launcher runs on Android ICS v4.0 and up. 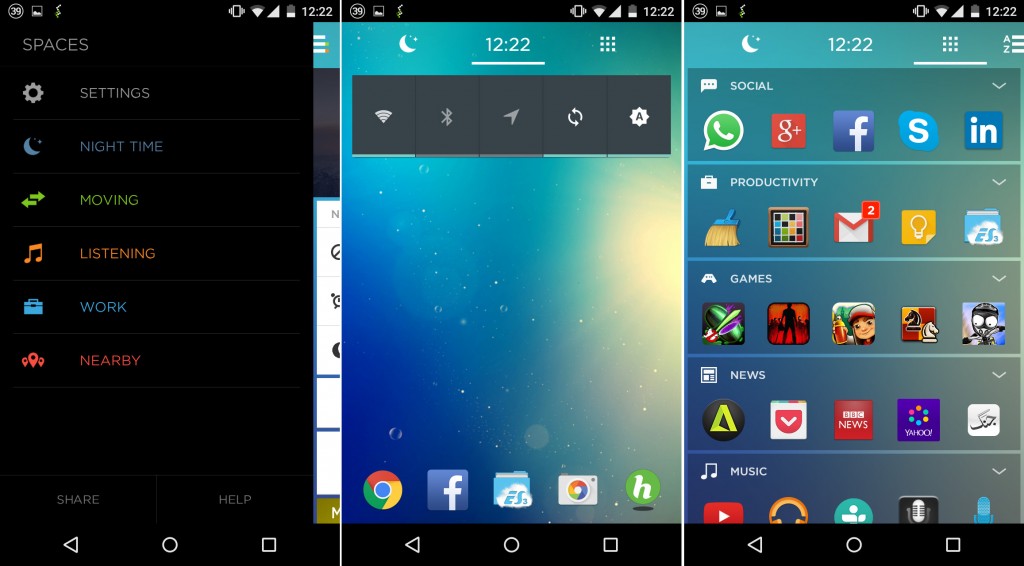 Witnessing the potential of the Aviate launcher, Yahoo! acquired ThumbsUp Labs, the company behind original version of the software, and rebranded it with some major improvements. Aviate is a vicinity-based, self-learning launcher. Once you turn the GPS on and tell it your Work and Home locations, it will automatically show the most appropriate apps and option when you change your location. For example, at Night time, Aviate will show options to quickly set-up alarm or enter sleep mode; and at Work, it will show the productivity and communication apps at the top.

Aviate is free, doesn’t show any ads, and is quite fluid. But a steeper learning curve means you’ll have to stick with it if you want to explore every feature it has to offer. Thankfully, it is compatible with devices running the Android OS version as old as v2.3.3 Gingerbread.

Still confused about what launcher to choose? Here is our compressed guide on what is the best Android launcher app for you according to what exactly are you looking for: 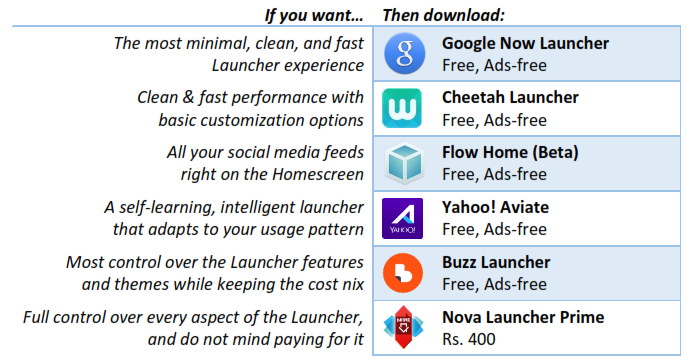 This list comes nowhere near close to addressing all the great launcher apps available in the Play Store and beyond. We, however, have tried our best to list all the major ones that can appeal to the majority of Android users among our readers.

Do drop a comment below if you use any of these launcher to tell us why you chose it, or also if we missed your favorite one! 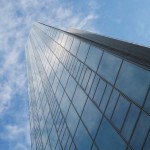