10th Anniversary Special: How the iPhone has evolved over the years 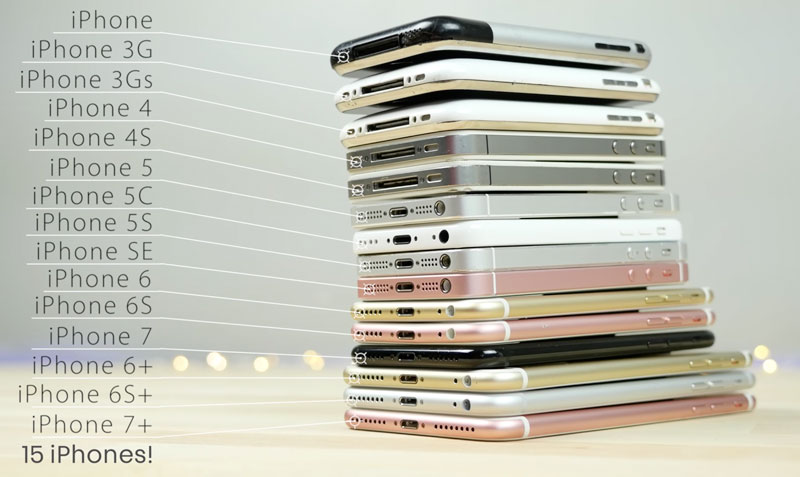 2007 was ten years ago. Let that sink in. It was the year when the last Harry Potter book hit the shelves, we all fell in love with a rat who loved to cook in the movie Ratatouille, the Spice Girls reunited, but most important of all, the world got its first glimpse of the iPhone, a device that would redefine what it meant to have a mobile.

Since January 2007, when Steve Jobs unveiled to the world the first iPhone, Apple has gone on to reveal 18 more devices, three of which were revealed today. In honor of the iPhone’s 10-year anniversary, we are taking you on a trip down memory lane to revive how the iPhone has evolved over the years. 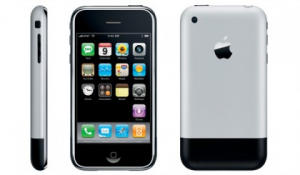 The first iPhone was unveiled by Steve Jobs on January 9, 2007, in a keynote address at the Macworld Conference & Expo in San Francisco. Jobs introduced the phone as a combination of widescreen iPod with touch controls, a revolutionary mobile phone, and a breakthrough Internet communicator. The iPhone came with the iPhone OS 1.0, made touch controls on smartphones mainstream, and brought with it GSM cellular connectivity with GPRS and EDGE support for data transfer.

The phone started rolling out to the public starting in June 2007 and went on to sell a total of 6.1 million units before it was discontinued in July 2008. 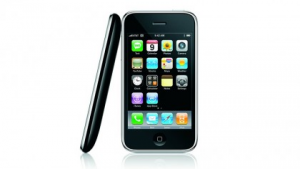 The iPhone 3G was released on July 11, 2008, and brought with it 3G data connectivity and the iPhone OS 2.0. The phone also had GPS connectivity and hence the phone introduced to users turn-by-turn navigation. Other impressive features included push notifications for emails and the App Store. The phone sold 1 million units in the first weekend alone and was discontinued two years later on June 7, 2010. 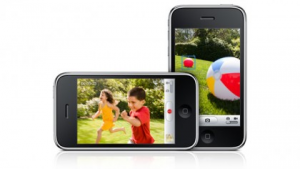 The iPhone 3GS was unveiled at the Apple Worldwide Developers Conference(WWDC) held on June 8, 2009. The device was a follow-up to the iPhone 3G and during the unveiling event, it was revealed that the ‘S’ in its name referred to speed because the device was better than its predecessors. Apple even marketed it with the slogan “The fastest, smartest phone yet”.

The phone had a 600 MHz ARM Cortex-A8 CPU with better performance, multitouch display, voice control, 7.2 Mbit/s HSDPA downloading, and a 2 MP rear camera with better resolution and video-capturing ability. The device sold over a million units in its first weekend and remained in production until September 2012 when the iPhone 5 was introduced. 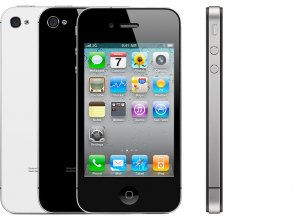 iPhone 4 was unveiled at the WWDC on June 7, 2010, and was released later that month. There was a lot of speculation leading up to the launch of the device. Steve Jobs labeled it as the thinnest smartphone at the time and it was also the first iPhone device to come with a front-facing camera. And it was also the phone that first introduced Apple’s FaceTime app. The iPhone 4 came packed with new hardware in the form of a stainless steel frame which doubles as an antenna, a new high-resolution Retina Display with a pixel density of 326 pixels per inch while maintaining the aspect ratio of the previous devices.

The iPhone 4 was praised by critics for its beautiful design and strong hardware as compared to the predecessors. However, with praise also came a lot of criticism on the design of its antenna, with people stating that it messed with signal strength if the phone was held in a particular way. Nonetheless, the phone received over 600,000 pre-order in the first 24 hours alone and remained the Apple flagship device for the next 15 months. It wasn’t discontinued until 2013. 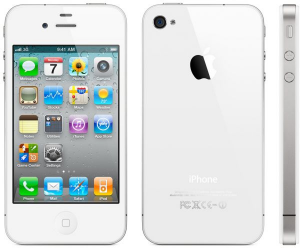 The iPhone 4S was announced on October 4, 2011. It holds a lot of significance because its announcement was also linked with the death of Steve Jobs, who passed the following day. The iPhone 4S was the first phone to introduce Apple’s trademark smart personal assistant called Siri. In fact, the ‘S’ stands for Siri. Overall, the design of the phone was very similar to the iPhone 4 with some internal upgrades. It came with an Apple A5 chipset, an 8-megapixel camera from Sony with 1080p video recording, the iOS 5 and, most importantly, it rolled out features that would become Apple trademarks including iCloud, iMessage, Notification Center, and Reminders.

iPhone 4S sold 4 million units in the first 3 days alone and saw an overall sale of over 60 million units. It was officially discontinued from production in 2014. 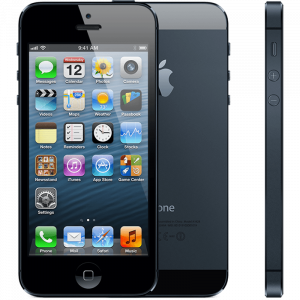 iPhone 5 was unveiled at a press event on September 12, 2012. It was the last iPhone that Steve Jobs oversaw and the first phone to be completely developed under the guidance of Tim Cook. The phone had major changes in its design. With an aluminum-based body, it was thinner and lighter as compared to its predecessors and it had a taller screen with a nearly 16:9 aspect ratio. It also introduced the Lightning dock connector for charging purposes which replaced the 30-pin design used by previous iPhone models.

The phone sold over 70 million units worldwide and was discontinued on September 10, 2013. 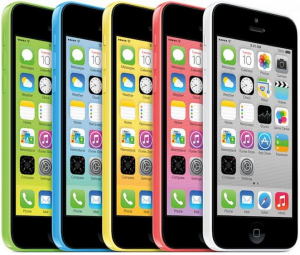 With the slogan “For the colorful”, the iPhone 5C broke away from the high-end aluminum design of its predecessor iPhone 5. It came with a hard-coated poly-carbonate back cover that had several color variants. Its counterpart, the iPhone 5S, still came with a strong aluminum body. The iPhone 5C did not have any standout features of its own except that it was sold at a discounted price as compared to the 5S. Upon the release of 5C, instead of discounting the price of the predecessor iPhone 5, Apple simply discontinued it.

Despite the fact that the iPhone 5C was among the top 3 best selling phones in the US for three months after its launch, it wasn’t exactly Apple’s most profitable phones. The 2013 Apple flagships sold a cumulative 9 million units in the first three days but the 5S was sold 3 times more than the 5C. It was discontinued on September 9, 2015. 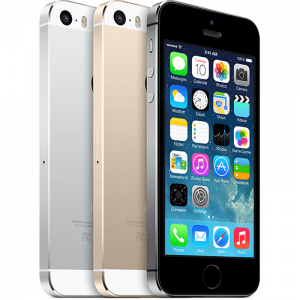 iPhone 5S was released along with the colorful iPhone 5C on September 10, 2013, in the Apple HQ in Cupertino. It had the same design as its predecessor iPhone 5 but introduced a new color scheme of White/Gold to the existing White/Silver and Space Gray/Black color schemes.

iPhone 5S was appreciated for its upgraded hardware, flat design of the iOS 7, and the TouchID. Some sellers went so far as to call it the best smartphone available in the market at the time. iPhone 5S, together with the iPhone 5C, sold 9 million units on the opening weekend, breaking all previous Apple iPhone sales records. 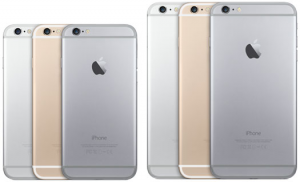 iPhone 6 and iPhone 6 Plus were the successors of the previous iPhone 5S. They brought with them not just bigger screens but a faster processor, upgraded cameras, improved LTE and Wi-Fi connectivity. The iPhone 6 came with a 4.7-inch display while the 6 Plus had a 5.5-inch display.

While the phones earned a lot of praise for their design, specifications, camera, and battery life, they also had to face a lot of criticism for being susceptible to bending under pressure. The iPhone 6 was called out on having a lower screen resolution size as compared to other devices like it while the iPhone 6 Plus was subject to a lot of camera issues. Nonetheless, both the phones made over 10 million sales in the opening weekend, breaking Apple’s previous sales record. 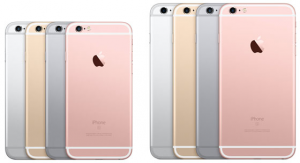 The iPhone 6S and iPhone 6S Plus were unveiled on September 9, 2015, by CEO Tim Cook and were released to customers starting on September 25, 2015. The devices were very similar to their predecessors – the iPhone 6 and 6 Plus. However, they had a hardware update, a better SoC, a strengthened chassis, a 12-megapixel camera, enhanced fingerprint recognition sensor, and LTE Advanced support. The phones also introduced the new 3D Touch which allowed pressure-sensitive touch inputs.

The iPhone 6S and 6S Plus differed primarily in their display size. The 6S had a4.7-inch display while 6S Plus was at 5.5 inches. The two models sold 13 million units in the opening weekend. 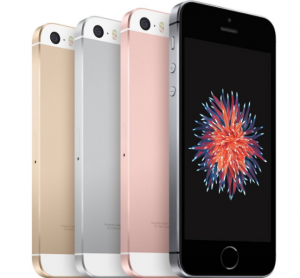 The iPhone SE, or Special Edition, was unveiled on March 21, 2016. Even though it came after iPhone 6, it was actually a successor of the iPhone 5S because it brought back the 4-inch screen size strongly reminiscent of the 5S. This phone was primarily targeted to customers who still wanted the small-screened iPhones. Despite being small, it had selected hardware upgrades from the larger iPhone 6S model, including its updated processor, rear camera, and support for iOS 10.

The iPhone SE was received positively by critics, who appreciated its design, performance, battery life, and the fact that it looked liked the previous iPhones but worked liked the new ones.

The iPhone 7 and iPhone 7 Plus looked a lot like their 6S counterparts except they removed the 3.5 mm headphone jack. New color options were introduced along with water and dust resistance, a new capacitive display, static home button. Internal hardware upgrades were also introduced, including a better SoC, improved CPU, and GPU performance, and upgraded 12-megapixel rear-facing dual camera.

Apple reduced the production of these phones after the hype of the initial months faded. 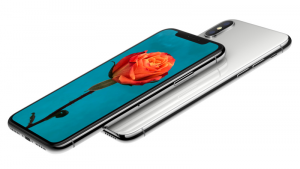 Apple’s much-awaited iPhone X was launched at the September 12 Apple Keynote Event. It is the biggest iPhone to-date with a 5.8-inch Super Retina Display. The phone is priced at $999 like it was predicted, and it brings a feature that we last saw in the iPhone 4 – a glass body. With the iPhone X, Apple has deviated from its aluminum body in favor of a glass and aluminum combo. Moreover, the phone is almost bezel less with an OLED Display from Samsung, a TrueDepth camera, wireless charging, water and dust resistance. The iPhone X comes with upgraded cameras, a 12MP dual camera, and 3D sensors for facial recognition which is the main part of its Face ID feature.

The phone will go on sale in late October. 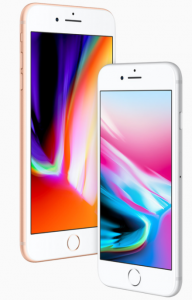 iPhone 8 and iPhone 8 Plus were the other two flagship smartphones launched at the Apple Keynote. The phones come with a combo of a glass and aluminum body, Retina HD display, and A11 bionic chip. Both the phones have been optimized for augmented reality as well. Like their counterparts in the previous 6, 6S, and 7 series, the iPhone 8 has a 4.7-inch display while the iPhone 8 Plus comes with a 5.5-inch display. Apple guarantees better-than-before cameras and an all new wireless charging capability. 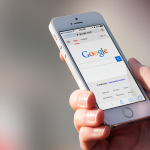