Last year, Dubai had invited strong privacy concerns by deploying smart facial recognition to keep an eye on criminal elements and suspicious movements at metro stations. Nevertheless, it’s an AI-backed crime-fighting system that has scored a victory by identifying a notorious French narcotrafficker in Dubai’s streets.

The kingpin Moufide Bouchibi had been successfully dodging the French police and Interpol for years by changing his I.D. in every part of the world to which he fled and was nicknamed ‘The Ghost’ for his ability to stay off the radar. The task of finding him became even more challenging since authorities didn’t have a picture of him taken in the past 20 years.

But machine learning processed available images and videos of the narco kingpin to point him out to Dubai’s police. In a series of events right out of a true-crime series, authorities followed up on data from A.I. and finally captured Bouchibi.

The successful collaboration between man and machine is in line with UAE’s approach to fight crime with tech on every level. Apart from cracking down on notorious criminals, intelligent surveillance helps the Emirati authorities tackle traffic rules violations to avoid accidents and save lives.

Inmates are also being offered a chance to integrate into society by letting them walk out of prison with tracking devices to monitor their movements. Social recognition has also increased in public life since Dubai airport has started using Iris scans instead of passports to enable travelers’ contactless access. 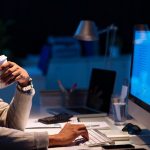 77% tech professionals looking for new jobs in 2021, a report reveals